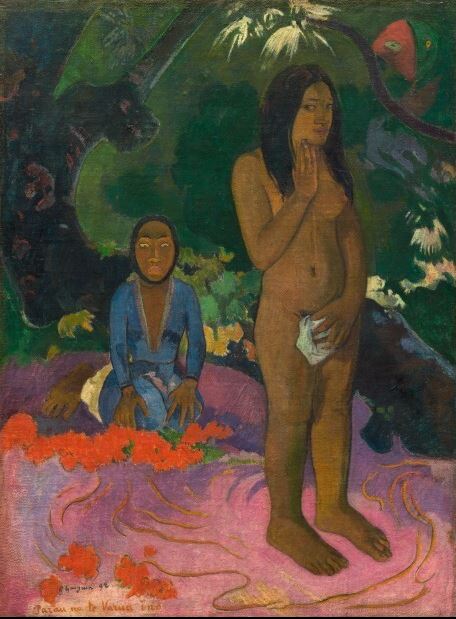 For today’s creature we venture into the tropical paradise of the South Seas: a place of warm, hospitable people, jewel-like islands adorned with palm-trees swaying in the breeze–and blood-thirsty elementals.  The narrator is an Englishman, who, after being wounded at Gallipoli, came back to spend the rest of his life on the “hollow island” known as Ahu Ahu or Nukutere.  He begins with an assessment of the influence of Christian missionaries on the beliefs of the Polynesian peoples.

“As for true religious faith of the kind which the missionaries sincerely hoped to instill, that plays in the life of the Kanaka a part of about the same importance as in the life of the average white man. Don’t think I am cynical in saying this—I respect and envy men who possess real faith; they are the ones by whom every great task is accomplished. But the religion of the native is less than skin deep; his observance of the Sabbath day a survival of the old tapu; his churchgoing and singing of hymns—satisfying the social instinct, the love of gossip, the desire to be seen in fine clothes—replace the old-time dance, wrestling matches, and exhibitions of the areoi. You have seen something of the outer islands, where the people are half savage even to-day, still swayed by what we call heathen superstition. Now consider Tahiti, where the people for more than a hundred years have been subjected to exhortations of an intensity almost unparalleled. If it is possible to inject our religion into their blood, it must have been accomplished in Tahiti, but in my opinion the efforts of three generations of missionaries have produced a result surprisingly small on this island — the most civilized of the South Pacific—where heathen superstition is far from dead to-day.

“Before the schooners took to Penrhyn Lagoon we used to spend the hurricane season in Papeete; I never cared much for towns; I usually put in the time wandering about the more remote districts. Civilization has barely scratched the inner life of Tahiti. Men who wear trousers and go to church by day would fear to sleep at night unless a lamp burned in the house to repel the varua ino and ghastly tupapau of their ancestors. If a girl falls ill the native doctor—a lineal descendant of the heathen priest—is called in. ‘What have you done during the past week?’ he asks. . . . ‘You spoke harshly to that old woman? Ah, I knew there was a cause!’ He administers a remedy in the form of a certain bath or a sprinkling with the water of a young coconut, and takes his leave. If the girl recovers it is a remarkable instance of the doctor’s skill; if she dies it is proof that her offense was too grave to be remedied. Perhaps a ghost walks and the native doctor is again consulted. ‘It is your wife who comes to trouble you at night? How was she buried?’ Eventually the grave is opened and the body found to be lying face down; when turned on her back and again covered with earth the lady is content, and ceases her disreputable prowlings.

“I am not convinced that all of these things are absurdity…. I told you, when we were on the schooner, about some of my curious experiences in this group. There are happenings fully as strange on Tahiti and Moorea. You must have heard of what the natives call varua ino—a vague variety of devil, a sort of earth spirit, quite unhuman and intensely malignant. The people are not fond of discussing this subject, and their beliefs have become so tangled that it is impossible to get a straightforward story, but as nearly as I can make out, numbers of these varua ino are thought to lie in wait wherever a man or woman is dying, struggling fiercely with one another in their effort to catch and devour the departing human soul. If the spirit makes its escape the first time the ravening watchers do not give up hope, but linger about the body, to which the soul is apt to return from time to time during the day or two following death. The human soul, at this stage, is considered nearly as malignant and dangerous as the varua ino—you can see what a garbled business it is. Sometimes an earth spirit enters the corrupted body and walks abroad at night. On one subject the natives all agree: the struggles of the preying spirits and the human soul are apt to be marked by splashes and pools of blood— whose blood I have never learned to my satisfaction.

“A friend of mine—an educated and skeptical Englishman, in whose word I have the utmost confidence—was the witness of one of these blood-splashing affairs. He lived on Moorea, just across from Tahiti; Haapiti was the village, I think. One afternoon he whistled to his fox terrier and strolled to a near-by house, where the body of a native (an old fellow he had liked) lay in state, surrounded by mourning relatives. As he stood on the veranda the dog began to growl furiously, and at the same moment the oldest man present—a sort of doctor and authority on spiritual matters—shouted out suddenly that everyone must leave the house. The native explained afterward that he had caught a glimpse of something like a small comet —a shapeless and luminous body, trailing a fiery tail— rushing horizontally toward the rear of the building. The people gathered outside in a bit of a panic; the fox terrier seemed to have gone mad on the porch— alternately cowing and leaping forward with frenzied growls toward some invisible thing. All at once there was a great racket of overturned furniture inside the house, and next moment the Englishman saw gouts of what looked like blood splashing over the outer wall and the floor of the veranda. The dog was covered— it was a week before his coat was clean. The net result of the affair was that the veranda needed a cleaning, a couple of tables were overturned, and the body of the old man considerably disturbed; but its most curious feature is the fact that my friend— suspecting native trickery and the desire to impress a white man—took a specimen of the blood across to Papeete, where he got the hospital people to examine it. It was human blood beyond a doubt. What do you make of that?”

We have heard from Hall before in a story of a giant phantom dog. With Nordhoff he wrote the Mutiny on the Bounty trilogy. After the First World War, he spent most of the rest of his life in Tahiti.

Other bloody elementals? Precipitate to Chriswoodyard8 AT gmail.com  I seem to remember something about splashing blood being part of an Indian fakir’s repertoire.