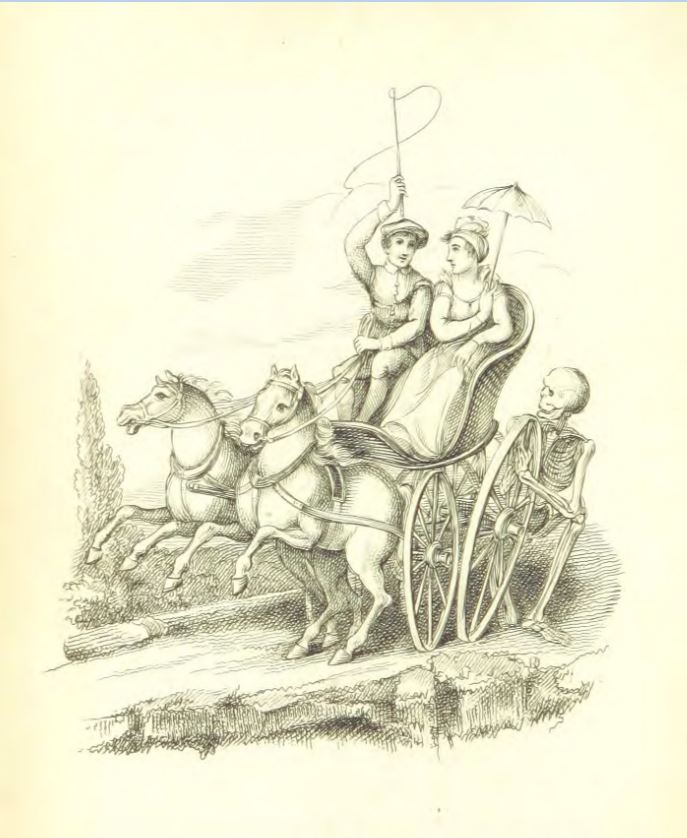 The roads of British ghost-lore are crowded with highwaymen thundering their way to oblivion, carriages of fiery skeletons, and headless horses steering hearses to the doors of the doomed.  I’ve previously written about phantom automobiles and phantom coaches and a carriage driver cheerfully plying his trade after death. If you search this site for “road ghosts” or “transport ghosts,” you’ll find a gridlock of ghost stories. But what kind of ghostly vehicles do we find on the interstates and back roads of the United States?  In this case, from Colorado, we find an exceptionally anomalous story of

The Phantom Horse and Buggy

[This] story was brought into the office in manuscript form by the person who wrote it, and left with a personal letter addressed to the editor. The letter, omitting only those portions which would give a clew to the identity of the person, is given below. Do you ask, “Why not give us the name?” “Why do not these relators of marvelous experiences come forth into the open and reveal their identity?”

For the simple reason, as set forth in previous articles in this series that you, my dear sir, or madam, with your superior knowledge of everything under the sun, curl your lip with scorn at the credulity of those who relate these experiences as facts, and because you would hold them up to ridicule merely from the fact that YOU never experience anything out of the commonplace. Perhaps you would even charge that the publication of the name was due to a morbid desire for notoriety.

The letter, signed with full name and giving the Colorado Springs address, is as follows:
“Editor of the Gazette—I enclose an ‘experience’ of my own which is just as true and real as any experience of my life. I could give you several other unexplainable things if you want them. Do not publish my name. I seldom mention these things as I am generally met with, “’Well, I didn’t know you were a spiritualist,’ or some other sarcastic remark of that kind. I am the strictest kind of a Baptist, if you care to know. I came to this town 20 years ago next month.” (Here follows a brief account of responsible positions occupied here and elsewhere in the west.) The letter concludes.
“There are dozens of the old citizens here who could identify me and I do not think I have the reputation of being a crank, weak-minded or anything of that sort.”

The manuscript which accompanied the personal letter is as follows:

A number of years ago I lived for a while on a ranch several miles east of this city with my father, a strictly orthodox clergyman, retired from preaching at that time. He was more than commonly opposed to anything approaching spiritualism which he called “unholy,” ‘of the devil,” etc. Neither of us were superstitious in any respect.

The plains where we lived at that time were almost entirely bare of human habitations as well as of trees. The road by which we reached our place left the main road at the foot of a slight hill about three-quarters of a mile from the house and was our private road and went no further. From the house we could not see teams as they turned into our road, but after they ascended the little hill the road was almost level, there being a slight depression, probably a quarter of a mile long, but not deep enough to lose sight of a horse or cow passing through it.

In Sight, But Never Came.

One evening shortly before sunset we were watching the road for some friends we were expecting. My father announced that they were coming. I looked and saw the horse and buggy approaching. They were just going into the depression in the road. They were driving quite fast, but after watching for some time they did not arrive, and although we watched the road closely for perhaps an hour, they simply were NOT THERE. Daylight faded, night came and they still did not come. My father was completely puzzled. He remarked several times during the evening: “I would not have thought it possible my eyes could have deceived me so;” “it must have been because it was so near night and the light was fading,” and other similar remarks.

The next morning he said he should look for our company, but I did not expect them, as they always came to spend the night. About 9:30 or 10 o’clock, however, we saw them coming up the road at a brisk pace, but with the same result—they never reached the house. We watched the road even more closely than before, saw them drive down into the shallow depression where they were still in full view, and after a time they were not there.

This occurrence took place so often that we christened the horse and buggy the “ghost,” and when either of us was absent for a day, the first inquiry of the one who remained at home always was, “Have you seen the ghost today?” The answer almost invariably was “Yes.” No one else ever saw it, to my knowledge, but we saw it each one separately, and both together, many times.

On one occasion I was at home alone and was out with the dog driving away some cattle. Suddenly the dog turned from following the cattle and barked down the road. I looked and saw a horse and buggy coming quite fast. I ran to the house, but again there was nothing in sight. This was about 3 p.m. of a bright day. The dog spent the rest of the day hunting the trail. A more foolish looking dog I never saw.

One Sunday morning there was fresh snow—about four inches I think—when we spied the mysterious vehicle approaching, only to be gone while we looked. Watch as closely as we might there was never any “vanishing” process. My father said, exultingly, “Now I will find out where it goes, I will go down there and see where the tracks go.” He was gone a long time and came back very slowly, his head down, apparently in deep thought. In reply to my “Well?” he said: “It is just as I thought, there were no tracks.”

Met It on the Road.

The last time I ever saw it was one morning when my father started over to his own place some three miles away. He had just started when I beheld the “ghost” coming over the little hill. I said, “now he will meet it and see what it is.” I watched them both constantly , saw them approach each other as two teams meeting, saw my father continue on his way, but the other disappeared. He did not see it at all this time. This was his last trip alone over that road. He died in that house soon after.

Now can some one explain this?

One Person in the Buggy.

We were not superstitious. We were never in the least afraid. We were always fooled, always took it for a real object instead of a phantom. It was always exactly the same thing, a large brown horse, an old-fashioned, one-seated buggy, with high back and one person so wrapped as to be uncertain whether it was a man or woman, tall and rather stooping, and always driving fast. Who was it, and why did they appear to us so persistently, and never to anyone else?

The mirage theory is untenable as we saw that one object and no other, and at all hours of the day, and in all kinds of light. What did the dog see?

It was a short time after this that the papers gave an account of a very similar apparition said to have been seen by hundreds of people on the streets of Kansas City, and a little later, “The Phantom ‘Rickshaw” was written.

The poignancy of that “Daylight faded, night came and they still did not come…”  If the anticipated visitors had eventually arrived, we could have comfortably dismissed the phantom horse and buggy with the crisp appellation “Vardøger,” that apparition or sound that arrives in advance of an actual flesh-and-blood visitation. Yet the visitors never came and there is no explanation.  If this was a standard-issue ghost story, their mangled bodies, smashed rig, and dead horse would have been found at the foot of a convenient cliff the next day. We lack even that grim consolation.

If this had been a report to the Society for Psychical Research, a visit from the banshee buggy would have foretold a family death; given the ghost’s frequent appearances, the largest family group would have been wiped out in a matter of months. There is a hint that the meeting on the road was fatal to the narrator’s father, but on the whole, the phantom buggy was a singularly inept Token of Death.

Then there is the matter of the appearance of the creature driving the phantom buggy. M.R. James could not have put in a more chillingly understated fashion: “one person so wrapped as to be uncertain whether it was a man or woman, tall and rather stooping, and always driving fast.”

The detail about the buggy driving quite fast is a puzzling one. Why should the Dead travel fast, if they never arrive? The whole thing smacks of the balking Dead….

I have not yet located the similar apparition in Kansas City. Information on that or other phantom horses and buggies? chriswoodyard8 AT gmail.com