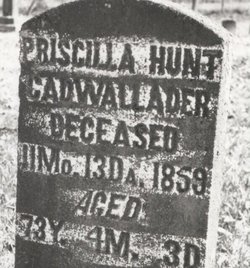 Encore: The Battle of Gettysburg Foretold by a Clairvoyant and a Quakeress Priscilla Coffin Hunt Cadwallader’s tombstone.

Since it is the 151st anniversary of the Battle of Gettysburg, let us look at two reported prophecies of that monumental event.