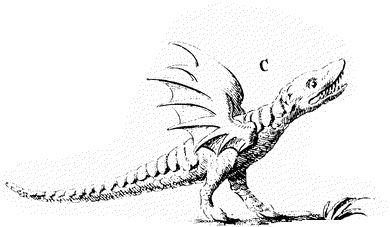 We’re officially into the Silly Season of summer, so today I share one of the stars of the Silly Seasons of the past: a sea monster. This story, however, does not come from the serpentine pen of the 19th-century journalist seeking to fill column-inches, but from a Constant Reader of The Gentleman’s Magazine, from Kent, who signs himself “T.H.”

Explication of the Fig. at C.

I send you inclosed such a representation, as I could delineate from my memory, of a sea monster, which is carried about the countries by a fisherman, who was disabled by it when taken.
its head and tail resemble those of an alligator; it has two large fins, which serve it both to swim and to fly: and tho’ they were so dried that I could not extend them, yet they appear, by the folds, to be shaped like those which painters have given to dragons, and other winged monsters, that serve as supporters to coats of arms. Its body is cover’d with impenetrable scales; its legs have two joints, and its feet are hoofed, like those of an ass; it has five rows of very white and sharp teeth in each jaw, and is in length about four feet, tho’ it was longer when alive, it having shrunk as it became dry.

It was caught in a net with mackerel, and being dragged on shore was knock’d down with a stretcher, or boat-hook. The net being open’d, it suddenly sprung up, and flew above 50 yards; the man who first seized it had several of his fingers bitten off, and the wound mortifying, he died. It afterwards fasten’d on the man’s arm who shews it, and lacerated it so much, that the muscles are shrunk, and the hand and fingers distorted; the wound is not yet healed, and is thought to be incurable. It is said, by some, to have been described by naturalists under the name of the Sea-Dragon. I have not, however, seen any description that corresponds with this creature, and am inclined to think it a monster.

[We are greatly obliged by the draught and description of this creature,–We heard, in Norfolk and Suffolk, of its being shewn about those counties, soon after it was taken, which was between Orford and Southwould, [sic] on the coast of Suffolk, in the manner above related.]

One G. Smith, of Wigton, said (if I am reading this correctly), that he too had examined the actual creature and that he thought it might be a Harpy. Or not.

I Myself had an opportunity of examining, with singular curiosity, the creature represented by the print, in your Nov. Mag. and there, p. 506 C, called a Sea-monster. It appeared to me to be the same creature which might give rise to the antient Harpy of the poets.—All the authors that have mention’d them agree, that they inhabited the ocean, and were sometimes, but very rarely seen.—Virgil’s description of the Harpies corresponds much with all the observations made on your Monster, abating some poetical indulgencies of fancy, which the antients were extremely fond of, to allegorize truth;

Here they are described winged and invulnerable, leaving behind them terrible marks of their natural ferocity, wherever they fixed; and probably none of the antient sailors had courage enough to attack, or however to kill any, especially as they were estimated amongst the infernal deities; so that their description must be inaccurate, and probably exaggerated.

However, rather than conclude any unknown animal to be a Monster, or a partus extra naturam, I would suppose it an individual of a species unknown; our ignorance of the extent and variety of the creation being justly lamented.

Personally, I think Mr Smith was just showing off his Virgil; the creature is nothing like a harpy.

It appears to be a standard-issue wyvern, although the fact that it was taken on tour strongly suggests a mere Jenny Haniver. Such patchwork creatures were known since at least the 16th century and were often the work of seamen or purchased by them in foreign ports. The dramatic story of the creature’s capture seems a cut above the usual showman’s patter.  And the death of the de-digitised companion was especially effective. I wonder how the exhibitor actually got his wounded arm?

This part of the Suffolk coast seems to have a long history of sea monsters. As we are informed by Matthew Paris, in 1255

“there was thrown up by the rage and turbulence of the waves an enormous sea-monster, which was washed on shore within the diocese of Norwich, and killed, as it was imagined, by the violence of the motion. It was in size much larger than a whale, and yet it was not supposed to be a whale; however, the fat from the belly of this monster enriched the whole neighbourhood round.”

And even today the story of Wild Man of Orford, a merman caught off Orford in 1167, is still told in that resort town.

The Suffolk Sea Monster story also had (two-jointed) legs. It was reprinted in such later publications as The New Wonderful Museum, and Extraordinary Magazine (1805), Encyclopaedia Perthensis, Or, Universal Dictionary of the Arts, Sciences, Literature, &c. (1816); and even the Encyclopaedia Britannica in 1797, 1798, 1810, 1815, 1817.

Where do Jenny Hanivers and carnival gaffs go when they fall out of fashion? Did the Suffolk monster eventually end up in some local cabinet of curiosities, like this one at Manchester College? chriswoodyard8 AT gmail.com

All the world loves a good sea monster, whether in or out of the Silly Season. This illustration of a winged sea monster, which was compared to a griffin, appeared in the Denver [CO] Post 11 January 1903. 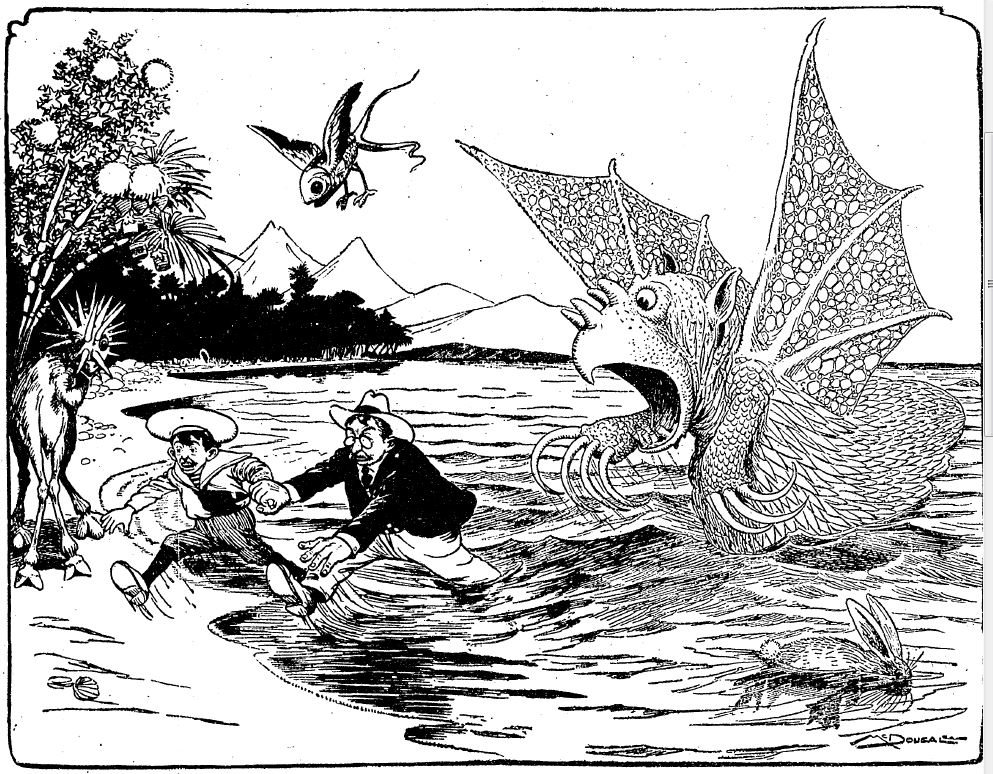 The Suffolk Sea Monster 1903 illustration from children’s story of a sea monster.