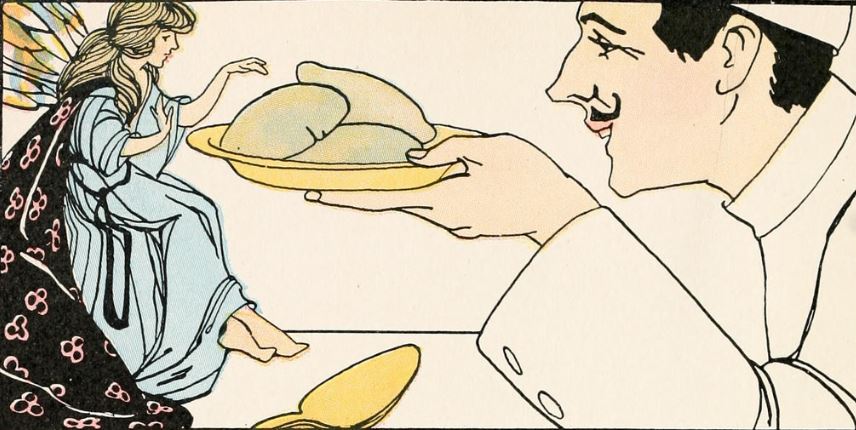 Feeding the Fairies A chef offers fairy cakes to the Blue Fairy.

The year was 1911. In Cleveland, Ohio, the city whose motto is “Progress and Prosperity,” all was vim, vigor, and vitality. Superstition had been laid to rest once and for all, except, of course, in isolated pockets of ignorant foreigners. Ghosts were exposed as tapping branches or pranksters in sheets in jocular newspaper accounts of “haunted houses,” while fairies found themselves confined to the children’s page and stage. There the malice of the traditional fairy was transformed into stories about helpful elves and fairy princesses, in which flowers and Moral Sentiments figured heavily.

It was in this disenchanted Ohio setting that that we find this tale of fairy-faith regained.

Airy Queens Wreak Vengeance on Man Whose Anger Interrupts Their Play With Little Girls in Park at Dusk.

For many years there have been those who say that no one in whose veins runs Irish blood can see long shadows fall athwart rain-wet trees and grass without believing that fairies really are.

Oliver Sullivan, who is coachman on East boulevard just north of Superior-av N.E., never heard this, but if you ask him now, he will agree, profanely, that it is so. Every night, for a week, his mistress says, he has put milk and bread and cheese on the big sun dial which is the pride of her establishment that a little girl’s curse may be lifted.

The trouble began when Sullivan, on his way home from a visit on E. 86th-st, cut across Rockefeller park a week ago. The grass was wet with rain and it spoiled his shine, while drops shaken from drenched trees spotted his collar. This made him irritable and, furthermore, he is a bachelor.

Sullivan crossed the lower boulevard and started up the hill through the trees. Just at the foot of the hill a little, ragged girl darted out of the growing dusk and almost stumbled against him. It has been said that he was a bachelor and eleven years a coachman. He was startled; he swore in some astonishment and demanded roughly:

“What’s this? What business have you here after dark?”

“They’re gone. They’re gone,” she sobbed, “and you scared them away. Besides, it isn’t dark yet.”

“Who’ve gone? Who are they?” said the coachman, harshly.

“The little people, the little people,” she said between her sobs, and continued to look anxiously about her. “You scared them away—and I’ve been so happy. Desdemona and I played with them every night. Desdemona is my sister; tonight, though she hurt her foot and went home crying.”

The coachman didn’t like this. There was something queer about it, but his first name was Oliver and he was used to chasing little children from smooth-shaven lawns. He took a step toward the little girl and snapped out:

“You’re mean. You’re mean,” screamed the little girl. “I hope you have trouble,” and she was gone down the hill and into the dark.

Oliver Sullivan started up the hill strangely shaken and very angry. He didn’t know why. He hadn’t taken three steps before something tripped him and he went down, cursing, in a heap. He picked himself up to find that a bit of rusty wire from somewhere had tangled his legs and had torn a great rent in his trousers. The wire was cantankerous. It seemed almost alive and he cut his fingers before he got it off.

As he got to his feet something, he is sure it wasn’t a branch, sent his new straw hat spinning. The brim was wrecked on a stone. When he started again a fly got in his eye and added to his discomfort and his ill-temper. He was worried, too, and wondering what “little people” meant.

He reached the top of the little hill and a mosquito settled on the back of his neck. When its proboscis began to bore it was the last straw. Oliver Sullivan started to run in frantic terror. Breathless and hatless he burst into his quarters in the stable. He stumbled over a chair, clutched at the top of his bureau, and, as he fell, tore the cover and spilled his few toilet articles under foot.

The mosquito had been the last straw. Sullivan sought the light and company of the kitchen for comfort.

He sat there for an hour trying to remember something his father or perhaps his father’s mother, had said once about the “little people.” Then he begged a bowl of milk, a few slices of bread, and a bit of cheese from the cook, put it on the sundial in the garden and went to bed.

Yesterday afternoon Oliver Sullivan presented himself at the desk in Hough library. He wanted a book on fairies, Irish fairies, he said. He’s reading it o’ nights, now.

Coachmen, like their successors, chauffeurs, had something of a problematic reputation as lotharios and dubious characters. Perhaps Sullivan was away with fairies of a different description. I don’t know enough about the historic neighborhoods of Cleveland to tell if E. 86th Street was a sporting sort of neighborhood.  The fact that he was worried about his collar and shined shoes suggests he dressed for something more than a beer with the boys.  His profession implies he was a man of the world, if a rather limited one. Yet a few words screamed by a child (and the spite of the Gentry) sent him into a full-fledged panic, plunging him into the fairy-faith of his fathers.

In Newfoundland, as Barbara Rieti writes in Strange Terrain, food is put out for the dead, who are considered to be living with the fairies. There is the well-known practice of leaving a bowl of milk for the house brownie.  Does the custom of putting out food to placate the Little People you’ve angered come from a particular location in Ireland? And is there any significance to the foods Sullivan chose?

And what of Esmeralda and Desdemona Bush?  Such grand names should have been easy to find in census or grave reports, but so far I’ve not located them.