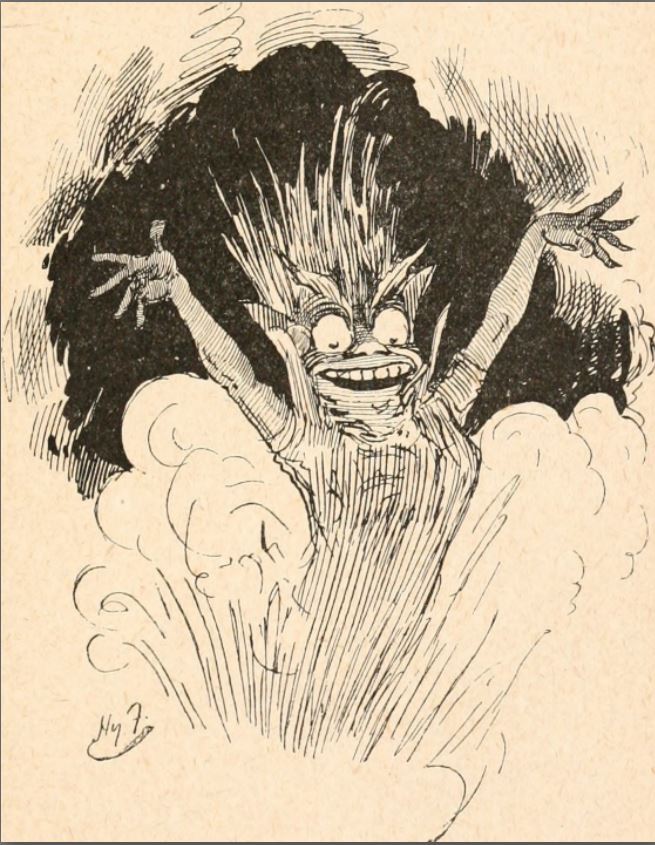 The Summer Solstice and St John’s Eve are at our throats, and since community open-burning laws prohibit the burning of wicker men in the back yard, I’ll have to compensate with a story of spook lights and mysterious fires. The fiery apparition in this tale from Pennsylvania is a shape-shifting spook light of modest mutability, until challenged by some local ghost-hunters.

The citizens residing on County Line street, or at least that portion of it near the top of Walnut Hill, have been much exercised lately by the appearance of an uncanny apparition, which, it is said, can be seen there almost any night. Those who have seen it declare it to be a transparent, luminous object that appears to rise out of the ground, at first looking like a spiral column. As soon as it reaches a certain height the upper part of it looks like a human being, having a head and shoulders, and something like wings where the arms ought to be. It is said to throw off sparks of blue fire, like the balls shot from a Roman candle. It sways to and fro, rises up and down, and sometimes rolls along the ground.

Three young men who were passing by the spot on their way home about two weeks ago. saw on the hill, just below Sampson’s stable, a queer-looking, luminous object. Wondering what it was, they got over the fence to investigate. When within a few yards, the thing suddenly rolled itself into a ball and commenced moving towards them, at the same time throwing off the fiery blue balls before mentioned. The young men stepped to one side to let it pass, and one of them, named C__, was struck in the eye by one of the blue sparks, and the next morning his visional organ had the appearance of having been engaged in a pugilistic encounter.

Since that time the ghost has been seen by a number of people.

A few nights ago a several young men who reside in the vicinity of Walnut Hill, determined to interview the spectre, and ascertain if possible whether the appearance was a “spirit of health or goblin damned.” For this purpose they met near Sampson’s stable at that uncanny hour of the night when graveyards are supposed to yawn. They climbed over the fence, and slowly approached the unhallowed spot. “Come on, fellows,” cried G., who appeared to be the ringleader, “don’t be scared; I’m not. Never was a G. yet that was afraid of the face of a man, or the—” “Hush!” almost shrieked McK.; “what’s that?” and he pointed his finger to a small, fiery object that appeared to be rising out of the ground. It continued to rise, until it stood nearly eight feet high, and the top of it gradually assumed the shape of a large human head. Flames appeared to issue from its huge, cavernous mouth. Not in one continual stream, but in puffs, like steam from an escape pipe. Sometimes the flames would shoot out ten or twelve feet. The large fiery eyes were continually fixed on the boys, making them tremble from head to foot. First it swayed from side to side, then backward and forward. At length, shooting up four or five feet in height, and shooting out flames to a greater distance, it commenced moving toward them.

With a horrible yell, the boys turned and fled. Five of them struck the top of the board fence at the same time, which unfortunately gave way, and they were precipitated down an embankment about ten feet and landed in a ditch. The boys, however, soon scrambled to their feet, and broke for their several homes, and did not feel safe until they were comfortably ensconced beneath the blankets, where they shook themselves to sleep.

The citizens of the neighborhood have come to the conclusion to call a convocation of preachers, in order to hold a prayer meeting on the spot, and by this means endeavor to lay the ghost. Our reporter has borrowed a navy re­volver, a huge club and a bowie knife, determined at all risks to watch the proceedings and inform the readers of the News how the “laying” of the ghost comes off.

This is one of those damned, single-source stories with no sequel that Forteans love to hate. I have the gravest suspicions that it was designed to keep the readers of the News picking up the paper to find out if the reporter had to use the revolver or the bowie knife or if the preachers were successful in laying the ghost.

This entity covers a lot of folkloric ground: “wings where the arms ought to be” suggests a Mothman-like creature. It follows the spook light handbook in its sparking and rolling and injuring a witness (with a hint of Dr Beachcombing’s rolling bogeys.) And, unusually for the United States, it is proposed that the clergy be called in to “lay the ghost.” This one would need a very large bottle.

I have to say that the image of the swelling, eight-foot-high human head belching flames brought the whole thing to thrilling life. Barring the flame-thrower effects, it suggested the scene at the end of Quatermass and the Pit where the grasshopper-devil slowly rises to loom over the city. 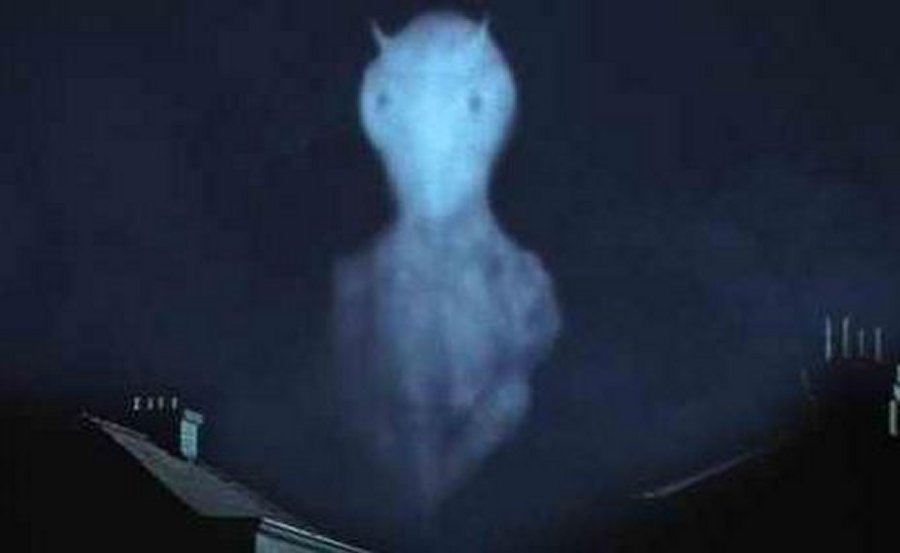 The Flame Game The luminous “devil” from Quatermass and the Pit.

Just to be Relentlessly Informative, while New Castle was not a center of coal or petroleum production like the anthracite coal fields of northeastern Pennsylvania, there was mining and drilling going on in Lawrence County in the nineteenth century. And where we find oil—whether the cause is hallucinations from toxic gases or actual flaming gas vents—we are likely to strike weird fortean phenomena, including fiery apparitions.

Any resolution to the tale above or other area ghosts? chriswoodyard8 AT gmail.com