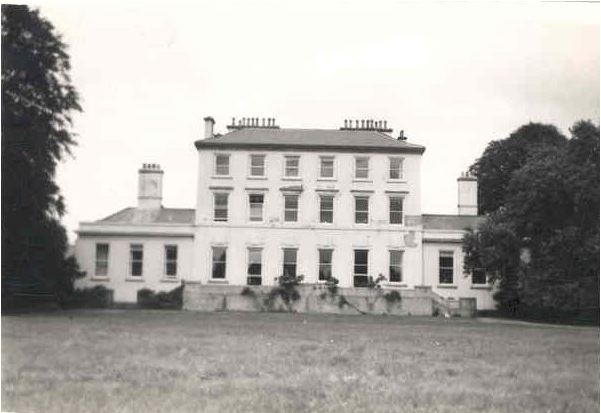 When I was a touring author and researcher, I spent many a happy mile on the road.  It would have made my life complete to see the phantom hitchhiker of Rt. 71, a ghost car, or even the skeletal Phantom of Route 40, but no…  Still,  transport ghosts are a driving passion. There is an immense body of European ghost stories based around phantom coaches and hearses. Often they carry headless passengers who invite belated pedestrians to join them, then drive off cliffs. They tend to be pulled by sable headless horses, driven by headless coachmen, and have lamps made of flaming human skulls.  But one of their star turns is that of Noble Family Token of Death.

The late Lady Victoria Kirwan, sister of the fourth and last Marquis of Hastings, who died in 1868, in his twenty-seventh year, after a career on the turf alike brief, brilliant, and disastrous, used to relate to her intimate friends an experience of her own in this connection, which she herself, at all events, firmly believed to be genuine. Lord Hastings’s last appearance at Newmarket was in October, 1868, and between that date and his death, which occurred on the 10th of November following, his sister, Lady Victoria, was either staying with him, or, at any rate, was one evening dining at his table. In the middle of dinner the lady distinctly heard the wheels of a carriage passing the windows, and immediately a ring at the door-bell. Lord Hastings evidently heard it also; for, after turning sharply round to ask a servant whether he had not heard the carriage and the ring, and receiving an answer in the negative, he rose abruptly from his place, saying he would go himself and see who it was.

A silence round the table (at which there was a large party) followed the sudden exit of the young host. Lady Victoria, who was seated at the opposite end of the table, used to say that she never forgot the feeling that came over her when Lord Hastings re-entered the dining-room and, looking round his guests with a white face and a smile which his sister, at least, perceived to be a painfully forced one, said, “I’ll bet anyone in the room a thousand to thirty that I’m dead in a month.” It was the phantom coach that they had heard — they, and no one else of those present, for it is heard by none save those of the blood. A month later the young Marquis was lying in his grave. Otago Witness 7 November 1900: p. 66

Although the sound of gravel crunching under their wheels as they pull up to the fateful door is an often-mentioned feature of the phantom coach, they also can be soundless. And the coach passengers are not always headless:

To the Editor of The Medium and Daybreak.

Dear Sir, Perhaps the following authentic story may be interesting to some of your readers. I give it just as it was told me by a very intelligent working man, one who would not be at all likely to be the victim of imagination, and whose word I can implicitly rely upon. He said, some years ago he travelled from Ealing to Brentford—a distance of about a mile and a quarter—to take a sack of potatoes in a barrow to his sister, who lived at the latter place. On his way he had to pass Ealing Park, the residence of Mr. [William] Lawrence, the great surgeon; this being about five months after the death of Mrs. Lawrence. He had got near the park, when he saw (nothing to frighten him) the well-known carriage of Mr. Lawrence coming up the road. He wheeled his barrow by the side and sat down on the handle, calmly waiting for the carriage to pass. As it came nearer, the first thing that puzzled him was the total absence of noise. As it passed him, he distinctly saw Mrs. L. sitting in the carriage as she used to in life. This took place at about nine o’clock on a summer evening—not the witching hour of twelve. The man, who is as hard-working, sober a fellow as ever lived, told me that others assured him that they also had seen this singular phantom.

[Our correspondent encloses his card.—Ed. M.]

I hate to spoil an excellent story, but Mrs Louisa Lawrence died 14 August 1855, so “five months” after her death would not have been a summer evening, but January 1856. Perhaps a lapse of memory after “some years?”

While the majority of phantom coaches arouse terror and foreboding in their witnesses, some actually got used to the mysterious visitors.

We asked old Mrs. Compton, of eighty-three, who lives there [Carham] now, about the supernatural sights of Carham. ‘Och,’ she said, ‘and have ye niver heerd the story of the phantom carriage? We’ve just heerd it this very morning; when we were waiting for you, we heerd it drive up. We are quite used to it now. A carriage drives quickly up to the door with great rattling noise, and, when it stops, the horses seem to paw and tear up the gravel. Strange servants are terribly frightened by it. One day, when I was at luncheon, I heard a carriage drive up quickly to the door: there was no doubt of it. I told the servant who was in waiting to go out and see who it was. When he came back, I asked who had come. He was pale as ashes, “Oh!” he said, “it’s only just the phantom coach.”

This story, narrated by an American visitor to Mount Coote in Ireland, shows a surprisingly blasé attitude towards the phenomenon.

Some years ago I received and accepted an invitation to spend a few weeks with some friends at their residence, Mount Coote, county of Limerick, Ireland. I arrived one evening just as that function known as “afternoon tea” was taking place, and was in the full enjoyment of a cup of the beverage and an accompaniment of hot cakes when I heard a carriage approaching the house at a rapid rate and finally draw up at the front door. Thinking that I was in no condition to meet strangers, for my hostess had insisting on my sitting down to tea in my traveling suit, which was a rough tweed, I said:

“Mrs. Rogers, if you will permit me to escape before your visitors come in I would like to go and change.”

“Pray don’t disturb yourself,” she answered, “that is only the phantom coach.”

“The phantom coach,” I repeated, thinking either that I had not heard aright or that she was joking.

“Yes, the ‘phantom coach.’ I assure you there is nothing there.”

“But,” I stammered, “I can hear the horses pawing the ground and champing their bits,” and moreover, the door bell had scarcely ceased to ring.

“Well,” she said, “if you won’t believe me, go and look for yourself,” and, taking advantage of her permission, for I was thoroughly mystified and equally incredulous, I went and opened the front door. Sure enough, as Mrs. Rogers had told me, there was nothing to be seen, and all the while the sounds of jingling harness were distinctly audible. I closed the door and returned to the parlor. My hostess, no doubt amused at my startled expression, asked me if I was satisfied. I admitted that, in a sense, I was; that is, as far as the correctness of her assertion was concerned, but said;
“Surely you don’t believe in a phantom coach driving up to your door?”

“Believe it? Of course I do. Why everyone in the neighborhood knows all about it and you see that the servants are so accustomed to the circumstance that they never even trouble to answer the door.”

Shortly afterward her husband came in, and, on being told it, laughed heartily at my discomfiture, adding: “Oh, don’t let that worry you. You will soon get accustomed to it.”

I soon did get accustomed to it, but nevertheless the matter worried me very considerably. I puzzled over it again and again, and thought that I had solved the matter by the theory of an echo, but investigation proved that no one for miles around was possessed of anything more pretentious than a one-horse trap, for, large as some of the estates were, none of their owners could afford to keep anything better. Moreover, the fact of the door bell being run remained.

The same thing occurred at irregular intervals, but always at the same time, between 5 and 6 P.M., and so real and unmistakable were the sounds that, in spite of previous demonstrations to the contrary, I could not persuade myself that a carriage was not actually at the door, and would repeatedly open it to assure myself of the fact, my eyes being always rewarded with the same empty space and my ears greeted with sounds which apparently proceeded from nothing at all. In this story I have quoted the actual name of the house and locality, and improbable as it may appear, have exaggerated no single fact, but stated the case exactly as it occurred, and as it no doubt occurs to this day. The Times [Philadelphia PA] 16 October 1892: p. 15

A bit of a let-down, that. One would expect at least a telegram announcing a distant cousin’s death or perhaps an outbreak of influenza in the neighborhood. It almost sounds as if the phantom coach in these last two cases was a failed vardøgr, a “forerunner” of someone coming to visit.  It didn’t bring a death and couldn’t even bring a visitor.  Shockingly low standards of service. But perhaps it was a case of what I have remarked about ghosts: that they have a statute of limitations and wear out over time.

These phantom coaches were mere shadows of their former death-driving selves. A proper phantom coach would have pulled up to the door, horses snorting and wheels crunching in orthodox fashion. Then, when the hapless resident answered the bell, the cadaverous coachman would have opened the door, beckoned, and said in sepulchral tones, “Always room for one more…”

Other phantom coaches–particularly modern sightings? (I was told of one near Youngstown, Ohio in 1968.) Steer to chriswodyard8 AT gmail.com

Mrs Daffodil shared a chilling story of The Death Coach.  I’ve posted on The Phantom Carriage that visited the Eddy Brothers’ household, and on Black Box Spectres.