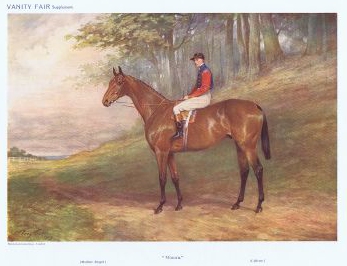 I know zip about horse-racing, but the Belmont Stakes is this weekend, and I enjoy a good hunch story. These tales include two with the additional morbid frisson of a funeral train and a horse with a sinister name.

Playing a Hunch at the Races

Did you ever play a hunch at the race track? Ever see a bluebird fly over the top of the car taking you to the track and then play the horse in the first race which carried a jockey wearing blue silk? If you haven’t, then you’ve missed something to talk about these hot summer days, with the mercury up around the century mark and the ponies up in Canada and New York.

Columns might be written about hunches that have made good and others that proved of no account. For instance, a broken-down actor arrived at Washington one day several years ago just as the Benning spring meeting was on. He had left the troupe in Richmond with enough money to get back to the Great White Way, but changed his mind when the capital was reached and went out to the track that afternoon. In the show which traveled over a Southern route he had played the part of Hamlet.

Buying a race program the first name he saw in the first race was that of Prince of Denmark. He played the hunch and the Prince came back to the judges’ stand a winner, and the broken-down actor prince left town that night with several hundred dollars more than he would have had had he stayed with the troupe.

There was registered at one of the fashionable hotels in London during the month of June, 1908 [actually 1907], a young American who signed himself Philip Lay Corby. A firm of patent medicine people in London made it a business to get as many of the registered names from the hotel books as possible and later send circulars describing the benefits to be derived from taking three or four bottles of their “wonderful medicine.” [Epsom Salts?] One of the letters arrived on the day Mr. Corby was to leave London for Paris, but after reading the address he decided to stay and go out to Epsom Downs to watch the running of the Derby. The name on the circular read: P. Lay Orby. The firm had omitted the C on the last name, so that by joining the first letter to the middle name the American read the following: “Play Orby.”

“By George!” exclaimed the American. “If that isn’t a hunch and a good one at that.” He showed the circular to all the clerks in the hotel and they agreed with him. An hour later he was on his way to the world’s most famous race course where he saw Mr. Richard Croker’s Orby win handsomely from a field of great thoroughbreds. Corby put a stiff bet down and won enough to stay two months longer in Europe than he had at first intended. A year later Mr. Corby again played a hunch which proved just as successful. King Edward had a crack looker in the classic race named Minuro. [Minoru]

“What does the name stand for? Corby inquired of a Japanese valet he happened to know.

“My own language,” replied the Jap. “It means success.” That was enough for Corby; he bet everything he had on the King’s horse and was as happy as His Majesty when “Minuro” flashed past the wire a good winner. The story reached the ear of the King and he was so pleased that he sent for Corby and the two had a merry laugh over the affair. During the conversation King Edward praised the sportsmanship of American horsemen, and recalled his happy meeting with the late Hon. William C. Whitney, of New York, Secretary of the Navy under President Cleveland….

While on the way to the race track in New Orleans one day several winters ago an undertaker named Mr. Dooley (no relation to the famous Mr. Dooley) passed a funeral procession on its way to the cemetery. Dooley had a friend with him, another Irishman, who exclaimed, “Sure, Death always wins.” There happened to be a horse entered that day named Death, and he won with ridiculous ease. Dooley told all his friends of the incident and they all went out to the course the next time Death was entered. He won every time he started for 13 races. It was near get-away day, when everyone was packing up ready to take the last train for New York. The horse was sold that afternoon at an auction sale and the buyer was Mr. Dooley. He hitched him a month later to a hearse and the horse became frightened and ran away, and was not stopped until the graveyard was reached. After the burial Dooley had the horse shot and buried near the cemetery. “You’re a dead one now, Death,” said Dooley, “but a live one in those 13 races.”  [A sad end for a winner, but the practical undertaker knew that a runaway was useless to pull a hearse. The papers were full of funeral fatalities from runaway hearse teams.]

Well,” said a pretty blonde one afternoon at Brighton, “I’m going to play the first horse that comes out of the paddock.” There were seven girls in the party, all from a theater on Broadway. The first horse to show his nose outside the paddock gate for the third race was one named May J. a horse that had never won a race in her career. The girls made up a purse of $5 and called a boy to place the bet. The odds on May J were 150 to 1.

“Why this skate hasn’t a ghost of chance,” remarked the boy messenger to a pal of his. “We’ll just go over and buy a few drinks on May J and the girls will never know the difference.”’

The start was ragged with May J a dozen lengths in front. She won easily, with the girls yelling their hearts’ delight, while the messenger was beating it as fast as he could toward the street car.

The girls, the horse and the boy have never been seen on a race track since.

To a Race Track and Won a Fortune By Playing Hearse.

Probably one of the strangest tips on record was one a prominent actor received when he was playing in Chicago. It was in the days of the Roby track. He had an engagement to take one of the women of the company to the races. Of course, she was late. They missed the last race train and were about to leave the station when the actress suggested that he inquire if there was not some other train by which they could reach the track.

“Well,” said an attendant, “there’s a funeral train going to the cemetery near the Roby track. I don’t think the mourners would take you along if they knew it, but maybe you could ride in the baggage car with the coffin if the woman doesn’t object.”

The actress had the racing fever and the two made the journey to the track seated on the coffin. They arrived in time for the third race. Bad luck attended them. They lost on that race and they lost on the fourth. Then the horse they bet on in the fifth fell

When they reached the track the actor had $100 and the woman $45. Of this only $20 remained. They were desperate. In looking over the entries for the last race the woman saw the name Hearse. They had never heard of the horse before.

“There’s our funeral tip,” the woman cried to the actor. “Let’s play him for all we’ve got!”

Other lucky hunches? What are the odds? Chriswoodyard8 AT gmail.com