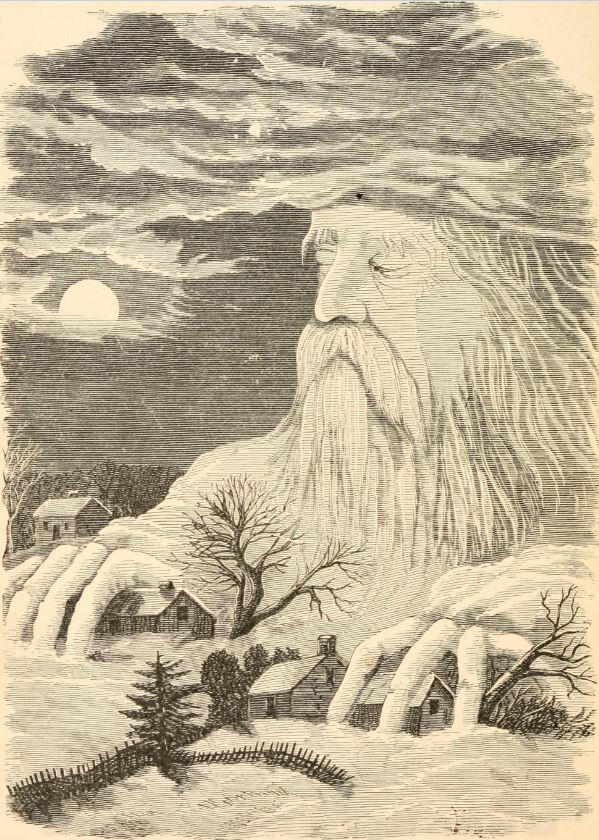 Jack Frost Nipping at Your Nose. Beware the killer frost….

Jack Frost Nipping at Your Nose

As we are all so busy this festive time of year, I will try to be less Relentlessly Informative and will be posting brief(ish) bits about Christmas holiday ghosts and oddities as well as ghost stories to tell by your holiday hearth through the end of the year. Here is a case of Jack Frost Nipping at Your Nose, with a vengeance.

I WILL try and relate the most awful experience I have had in connection with haunted houses, the absolute verification of which can be testified by several well-known people still living near the Kentish village in which it occurred.

We were all spending Christmas in the house of a friend, and in this house was one room said to be horribly haunted  on New Year’s Morn. It was always locked up, but, as one daring spirit said it was his full intention to spend the night in that room, the place was swept, windows opened,  fires lighted, and we all spent two or three evenings there in playing cards, round games, etc. Nothing extraordinary happened, if I omit frequent creakings of the furniture and rather weird noises (attributed by us to the wind coming down the chimney) which were heard during our quieter moments.

We tried to persuade Dick to go to bed in his usual room, after the striking of twelve by the village church clock. But, as he persisted, a truckle bed with plenty of warm bedclothes (the weather being bitterly cold) was put in the room, and a good fire left burning. “I shall lock and bolt my bedroom door, so that the spirit can’t come in from the passage,” he said, ” but I shall leave my window open as usual–I couldn’t sleep with it shut. Good-morning all.”

We were all assembled for breakfast the next morning, save Dick.

“I’ll go and fetch him out,” said his younger brother.

He returned in a couple of minutes with a scared face. “I can’t make him hear. The door is still locked and his hot water is now cold in the can outside his door. I’ll go round, climb up the tree outside his room, get on to the balcony and then into his room, and see what’s up.”

As he was going out of the room, the old gardener came rushing in with scant ceremony, horror depicted on all his features and trembling from head to foot.

“Ma’am, dear ma’am and ladies and gents, come quick with me do; I’m afeard.” We hurriedly followed him. I go cold now and shiver as I tell what we saw. Up an old pear-tree, to which he was clinging with all his might, in nothing but his night attire, and with an expression of wildest terror on every feature and wildly staring eyes, was Dick, covered with hoar frost, frozen to death!

What he saw no one will ever know in this world.

In answer to a letter sent to the writer of this story the following was received by the Editor: In response to your favour of this morning I beg to say that (unfortunately) “A Horrible End” is only too true. The house (seven miles from Maidstone) had to be pulled down, each successive tenant quitting it speedily after taking possession, on account of extraordinary noises at night, and many other occurrences of a frightening and weird nature. The publicity of the dreadful facts will give no pain to the poor lad’s relatives, only two of whom are in existence now–very old and dear friends of mine–whose sanction I obtained previously to sending the awful facts to “The Daily News.”

There was no solution discovered to the mysteries on pulling down the house.