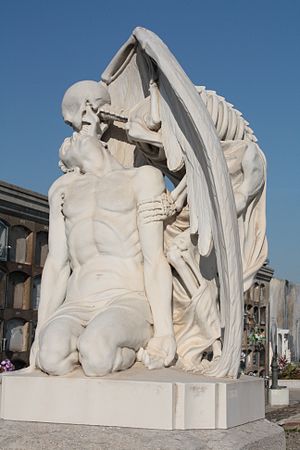 As we have all painted our faces like La Calavera Catrina and are munching sugar skulls to honor our Dear Departed on this Day of the Dead, let us settle down among the marigolds for a ghost story. On previous holidays, we have met a faithful dead nun and a skeletal bishop with his evil raven companion. Today we go to a churchyard in San Juan where a seductive entity sought its prey.

THE KISS OF DEATH

A Spectre That Appears in Beautiful Guise to Lure Men and Women to Death.

The Santa Cruz ghost, which is engrossing the attention of the citizens of that famous watering-place by its midnight revelries, recalls a legend of San Juan, in the adjoining county, told the writer many years ago by a narrator no less credible than a good old Spanish priest, with whom the writer happened to be staying on a few days’ visit.

One morning after breakfast he expressed a wish to stroll into the ancient graveyard attached to the old adobe church of that quaint little Mexican town. The old padre, with the kindness and courtesy characteristic of the simple missionary fathers, at once acceded and accompanied the writer, relating as we walked among the graves the brief history of some who lay quietly beneath. “Here,” he observed, with a quiet smile as he pointed to a grave in the middle of the cemetery, “here is a grave which the simple old Mexican families around here look upon with unusual interest, if not with actual awe.”

“No, no! Something much stranger. I have tried to combat the idea, and while I would be addressing the people they would say, “Si Si, Padre.” They would assent to all I said, but the belief remained and does remain indelible.

“A spirit,” he began, “is said to have appeared to everyone buried in that grave, and to warn the family whenever any of them is about to pass away.

“Its appearance, which is generally made in the following manner, is believed to be uniformly fatal, being an omen of death to those who are so unhappy as to meet with it.

“When a funeral takes place the spirit is said to watch the person who remains last in the graveyard, over whom it possesses a fascinating influence.

“If the person be a young man the spirit takes the shape of a fascinating female, inspires him with a charmed passion, and exacts a promise that he will meet her at the graveyard a month from that day. This promise is sealed with a kiss, that communicates a deadly taint to him who complies.

“The spirit then disappears. No sooner does the person from whom it received the promise and the kiss pass the boundary of the churchyard than he remembers the history of the specter. He sinks into despair and insanity and dies. If, on the contrary, the specter appears to a female, it assumes the form of a young man of exceeding elegance and beauty.” The padre showed me the grave of a young person about 18 years of age, who was said four months before to have fallen a victim to it. “Ten months ago,” the father said, “a man gave the promise and the fatal kiss, and consequently looked upon himself as lost. He took a fever and died and was buried on the day appointed for the meeting, which was exactly a month after the fatal interview.

“Incredible as it may appear, the friends of these two persons solemnly declared to me that the particulars of the interview were repeatedly detailed by the two persons without the slightest variation.

“There are several cases of the same kind mentioned, but the two cases alluded to are the only ones that came within my personal knowledge.

“It appears, however, that the spectre does not confine its operations to the graveyard only. There have been instances mentioned of its appearance at weddings and social parties, where it never failed to secure its victims by dancing them into pleuritic fevers.”

On being questions as to what he might think of such possible occurrences, the good father simply smiled and shook his head.

The Santa Cruz ghost mentioned was a Woman in White, like the classic Hispanic ghost, La Llorona, the Weeping Woman, said to weep for her children whom she killed when their father refused to marry her. Over time La Llorona has morphed into a kind of banshee, warning of imminent death, or a vampire spirit, luring young men to their doom. Here the churchyard specter is both incubus and succubus, an equal-opportunity, shape-shifting seducer. The victim’s oblivion until he or she steps out of the graveyard is an especially fiendish touch. There is an interesting echo of the Dancers of Kolbeck in that “dancing into pleuritic fevers” and a hint of the European belief that the last person buried in a graveyard is forced to be its guardian until the next corpse comes along.  Let this be a warning to all of us to never be the last one out of the graveyard….

Other cemetery ghosts? Sink not into despair and insanity, but write chriswoodyard8 AT gmail.com