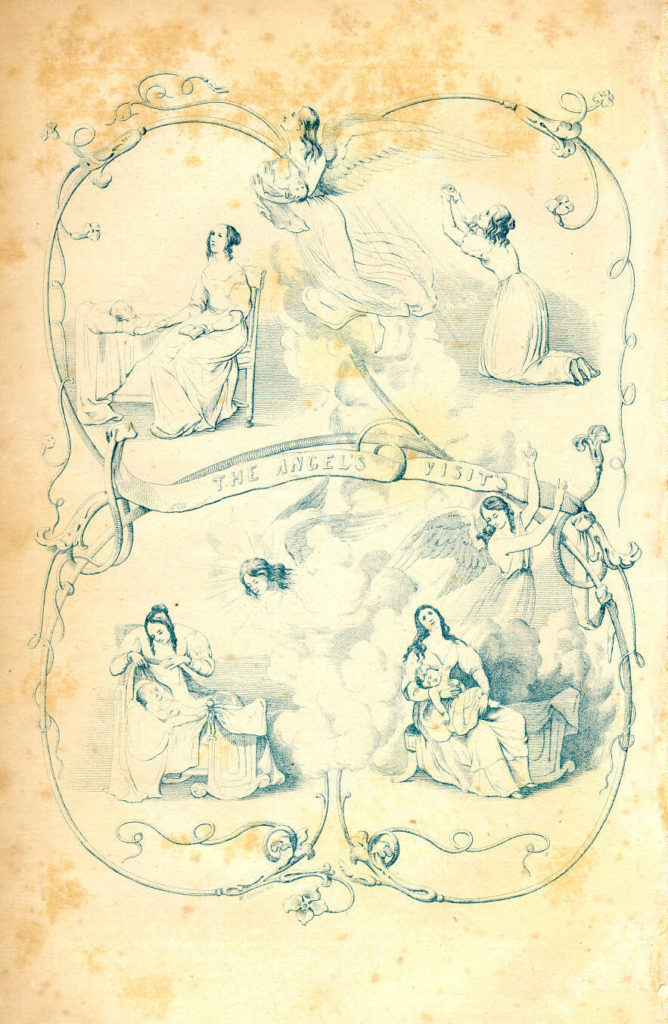 I’ve been meditating on the Gentry while reading Seeing Fairies by Marjorie T. Johnson and this excerpt, about fairies at a deathbed, as posted at Week in Weird, reminded me of this deathbed scene.

A little lad, robust, fun-loving, free, until he was eight years old, began then to fail in body and to mature in mind, until his spiritual nature seemed to have absorbed mental and physical, in development for another world. One evening, as it began to draw towards the first day of the week, half sitting, half lying in his great easy chair, he said to his eldest sister, who was watching by him, “I think this is the last night I shall spend with you.” He spoke in a perfectly calm ordinary tone. His sister fearing that he was dying, called in her mother but continued to stand over him and pressed her hand upon his brow. He immediately reached up his hand as though in trouble, saying to her “don’t put your hand there H—, I don’t see out of my eyes as you do. You’ve got your hand where my sight comes in;” then lying back with closed eyes, laboring hard for breath, he suddenly exclaimed “Oh, what a beautiful sight! See those little angels.”

“What are they doing?” asked his sister.

“Oh, they have hold of hands, and wreaths on their heads, and they are dancing in a circle round me. Oh, how happy they look, and they are whispering to each other. One of them says, I have been a good little boy and they would like to have me come with them.” He lay still awhile and then seeming delighted exclaimed, “see there comes some older angels—two at one end and two at the other.”

“Yes, uncle E. (who had died about six months before) but there are a whole row of older ones now standing behind the little ones.”

“Do they say anything to you?”

“Yes, but I can’t tell you as they tell me, for they sing it beautifully. We can’t sing so.”

“Can’t you tell what they say?”

“Keep still,” said he, “don’t talk and I will listen and tell you. They say ‘come, little J. and be happy with us.’ Grandma is speaking now. She says I’m a good little boy and if I come now she will take care of me. Uncle E. is speaking now, and he says, ‘write and tell them I am happy.’ He says if I do not get better, I shall come and be with him, in a world of love and joy. Oh, this is Sally (his mother’s only sister who died in her youth before his mother’s marriage.) She says I have a good mother, but if I don’t stay with my mother, I shall go and be happy with aunt Sally, and she will be like a sister to me.” He looked around the room and inquired how many were present; being told, he said, “There is one wanting, my dear father.” He was told that his father should be immediately sent for. After this he asked if we should know when he was dead. He felt that he was falling asleep. On being assured that we should know he remained as if going to sleep for some moments. Then, brightening up said in a stronger voice, “I guess I shall live longer; I don’t think I shall die now; and the angels said if I did not get better, I should come and be with them, and the angels are leaving me.” In a few moments he said, “They are all gone.”

Shortly after this, he turned to speak to his little niece, who stood beside him, when he said, “O, no! there is one angel flying around in the air, with a wreath on its little finger. This is my guardian angel.”

His mother, in the letter from which I have quoted, says, “I have given it to you precisely as it came from his sweet lips; for this heavenly scene threw over my whole soul such a calm and peaceful influence, that I was prepared to take the sentences upon paper as he delivered them to us.

“His sister was his close attendant during this season of severe suffering, and could easily distinguish every word he uttered, and so great was his desire that his dear father should enjoy the scene with us, he requested me to write it all down for him to see in case he should not live till his father’s return.

“You recollect his age which will be nine years the 22d of this month (1851). He remains perfectly conscious of everything which transpired on Saturday evening, and can accurately relate every incident. He says he has ‘two homes—one with the angels, and one with his friends on earth.’ When asked if he could describe to us the angels, he said he ‘could not, for he knew of nothing on the earth so beautiful,—they were clothed in white, and dwelt in light.’

“It seemed as though he had brought heaven to earth for us, and we could realize in some degree the joys of the upper world.”

In answer to questions regarding his condition at the time, the medicines he had taken, his mother wrote “He had not been asleep through the day, he had not taken medicine to affect him. He never took medicine in the least to affect his mind. He was not asleep, but sensible to everything passing around him. If any in the room were speaking when one of his beautiful messengers was about to address him, he would promptly request them to be “still” saying, ‘ Hush! don’t make a noise; for such an one (naming the person) wants to speak to me. I want to hear, and then I will tell you what is said.’ He would then listen smilingly, and, on receiving the message in full would turn his head and recite it to us in measured tones, and with emphatic precision. As his sister placed her hand upon his forehead in order to support his head, he instantly said,  ‘Don’t put your hand on there; for I see the angels through my forehead. I don’t see them, as I do you, through my eyes.’

“When he had called the name of my sister who had been dead over thirty years, and of whom he knew nothing at all, on hearing him say,’O, there is Sally!’ I turned from him and unavoidably wept aloud. Fearing I should disturb him, I went toward the window, when he opened his eyes and requested me to return to him saying, ‘You may cry, mother; it don’t hurt me!’ The next day when I asked him how he knew that it was my sister, as he had never known anything of her, he said, ‘O she told me it was Sally, before she told me the rest. The first thing she said to me was that she was my mother’s sister.’ After the vision ceased there was no change with him, as arousing from a dream; it was as if some of his loved neighbors had made him a call, and retired. No visit on earth was ever enjoyed by him with more rational pleasure than was this visit from those ‘beautiful angels of heaven.’ And ever after he would talk as familiarly of the ‘angels’ as though they had visited him in the body. In all his subsequent prayers, he would devoutly thank God that he had sent him his angels to teach him of the beauties of his heavenly home. Several times afterwards on different occasions, he was asked to describe the angels he had seen, but he could not. He said they were clothed in white, but it was no such white as we have on earth.”

His mother, at his request reading to him the New Testament in course, came to the transfiguration in the seventeenth chapter of Matthew. She had read the second verse, when he put forth his hands for her to stop. She looked at him and saw his face radiant. “That’s it, mother,” he cried, “that’s just the way the angels looked. You know I couldn’t tell you how white their robes were, but that tells it exactly. Their faces shone like the sun and their robes were as white as the light.”

A few days before his death, which occurred about three months afterwards, he said, “Mother, if you should again think me to be dying as you did when I had the vision, I don’t want you to cry because you think I am suffering; for when you went away from me and cried, because you thought I was suffering so much, I did not think anything about my sufferings; all I was thinking of was those beautiful angels, and how happy I should be when I came to be with them…”

As is usual with anomalous entities, there is overlap and ambiguity. This is a Christian household with Spiritualist leanings. Yet there are “little angels” dancing in a ring, trying to entice the dying boy to come with them. They are dressed in white and carry flowers.  They fly, although wings are not mentioned.

The child also recognizes the spirits of several dead relatives, as distinct from the “angels.” While  dead relatives coming to fetch the dying is a well-known feature of deathbed apparitions, it is also a motif often found in fairy lore.  There is a tale of a bereaved husband whose wife tells him she isn’t dead, but with the fairies and if he goes to where the fairies will be riding out, he will see her among them and can rescue her.  Or  this story of the Reverend Robert Kirk, who appeared to a relative after his death, saying that the fairies had taken him.  As pointed out in the Who Forted post, the Good People were often conflated with the souls of the dead so it is not certain if the humans they take dwell in Heaven, Purgatory, or Fairyland. The child names the little creatures as angels and describes them in terms of the Biblical Transfiguration, yet they beguile like the Gentry.

Perhaps the most intriguing detail is that the child sees the angels through his forehead, with the spot often called “The Third Eye.” Even stranger is the thought that blocking that place with the hand cuts off the sight. This sounds like an interesting experiment to do with ghost-seers who see spirits with their Third Eye area. What would a tin-foil shield over the forehead do?