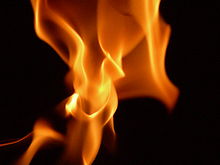 The fires have returned to the Sicilian village of Canneto di Caronia. In 2004 the village was plagued with hundreds of spontaneous fires. Electricity was cut and experts brought in to solve the mystery. Although eventually the fires died down, no one ever came up with an explanation. And now the fires are starting all over again.

In 1907, at the top of the Italian boot, in Sant’Agata, similar fiery manifestations broke out.

One of our readers has recently communicated to us the following curious piece of information quoted from the Corriere della Sera (Milan) of August 28th.

“The happy village which was fortunate enough to be the birthplace of Joseph Verdi and which still links its name with that of this master, being now known as Sant’Agata-Verdi, has been excited by some extraordinary phenomena which attract to the spot many inquisitive visitors.

“Ten days ago at La Costa (this is the name of a large property belonging to M. Pierre Zofi, of Busselo, and rented during the last six years to M. Charles Merli) a conflagration, the origin of which cannot be discovered, broke out unexpectedly, beginning among the peasants’ dwellings.

“By dint of much energy and promptitude all the cattle were saved, the buildings were isolated and the conflagration only destroyed the peasants’ cottages and some provision stores; in the evening the fire appeared to be entirely extinguished, nevertheless a daughter of M. Merli, called Dehlia, 16 years of age, suddenly awoke to find that her bed had caught fire whilst she was asleep. She was rescued, and the fire was again extinguished. On the following morning it was discovered that there must have been a slight conflagration in every room in the house, for there were traces of fire to be found on the walls, furniture, and carpets in every room. One cupboard had been completely blackened, and a curtain had been burnt altogether.

“The Merli family was much excited. On the same day the granary caught fire. There were no flames but only a large amount of smoke, which was enough to destroy all that it contained. Other conflagrations of the same sort occurred in M. Merli’s house (where furniture was burnt, and the barn floor, the grain being destroyed), and also in remote hedges in the open country. The conflagrations, which always revealed themselves by high thin columns of smoke, were at once observed, and prompt measures were taken to extinguish them. These phenomena have continued for ten days. The family of M. Merli has left La Costa with all their luggage: the population is much disturbed, and their alarm increases day by day. Many thousands of persons visit La Costa daily, the police remain always on the spot for the sake of maintaining order.

“No explanation of these strange phenomena could be found. Were they fresh spiritistic phenomena? This is the least credible explanation. It is more probable that they may be due to rapid and collective suggestion; simulation on the part of M. Merli is out of the question, he is above suspicion, and, moreover, for him these phenomena have only resulted in trouble and loss.”

In spite of the interest attaching to this communication we did not think it desirable to publish it at first, for reasons easily understood, in spite of the fact that many similar occurrences are reported, some of which are recorded in Animism and Spiritism, by Aksakoff. But the Matin now publishes an incident similar in many points to the above. It is on account of this curious analogy that we have decided to publish it.

“On the 11th of last September, during a violent storm, the lightning struck an almost isolated house in the rue de l’Abreuvoir, at La Courneuve, in the neighbourhood of Paris. It destroyed it totally. So far there is nothing extraordinary. But from this time strange things followed. Within a radius of about 100 yards round the house the lightning left strange traces of its passage in two of the neighbouring out-houses.

“From top to bottom, between the walls, under the sheds, on the ground itself, conflagrations occur at all hours of the day. Under some unknown influence objects suddenly burst into flame, which is hastily extinguished; being dealt with thus promptly the fire ceases as suddenly as it began. A few hours later it starts again in another place without any more apparent reason. This has occurred so often that in less than six days, in these two maisons de la foudre, thirty cases of spontaneous combustion have been noted.

“On the morning of the 12th, the day after the storm, the sheds and coach-houses of the owner of one of the properties, M. Seillier, a market gardener, suddenly caught fire; the firemen, summoned hastily, could only save the neighbouring houses; the rest was completely destroyed.

“This is not all. At the time when these sheds were burning, fire broke out equally suddenly at about fifty yards’ distance in a room on the first floor, at M. Vallaud’s house (a retailer).

“The same day at three o’clock, under similar conditions, the fire again burst out in the store-house of the market gardener. This time the floor was burnt. Blue flames singed the wood; an acrid smoke was liberated. The firemen, quickly reaching the spot, soon subdued the fire.

“On the 13th, the fire subsided, only one case being observed in the cellar of one of the houses.

“On the 14th, M. Seillier, going into his garden for a few minutes, left half a roll on the table; returning shortly he found, to his amazement, that one of the ends was burning like a tinder-box. M. Seillier removed the bit of bread and found that below, at the same spot, the table was also burning.

“On the same day, on two separate occasions, fire burst out in an empty cupboard.

“On the 15th and 16th the same things continued to occur. The handles of steel knives were burned as they lay in their box, which spontaneously caught fire. In the presence of upwards of twenty-five persons an umbrella, which was standing in the corner of a bedroom, suddenly took fire. In a quarter of an hour’s time nothing remained of it but the metal frame.

“But this is still more strange. An old hat was lying in the corner. One of the firemen in the course of one of his rounds threw this ‘old thing’ out of the window and thought no more of it. The hat fell on to the ledge of a ground-floor window, over which hung a light curtain; the hat struck the curtain, which caught fire, and the hat was destroyed.

“Yesterday, about 7 o’clock, the fire burst out in the garden between two big heaps of manure: and was again promptly extinguished. It will be admitted that these are strange and disturbing phenomena. Fires keep on breaking out, without reason, in all directions. Two days ago a staircase fell to dust. A fine shining dust of a crystalline appearance seemed to be liberated from it at the slightest touch.

“Another amazing fact is that it is always at certain hours that the fire breaks out, most frequently a few minutes after sunrise, and just at the beginning of the afternoon.

“The alarmed inhabitants of the neighbourhood are at a loss what to do. MM. Seillier and Vallaud are almost ready to declare that it is miraculous, and it is whispered that these marvels are the work of malicious sorcerers.”

The Matin publishes prints representing the house in question. The burnt bread was for some days exposed to view in a window which is at the entrance to the offices of this journal, opening on the boulevard. The facts should be noted, whilst at the same time we should be in no haste to attribute to them a marvellous origin, for they may be destined only to find a place among the eccentricities of thunder and lightning, in a new edition of M. Flammarion’s curious book on this subject, or perhaps among the criminal records of incendiary mania.

The Annals of Psychical Science, Volume 6, 1907

If the fires had started first in the bed of the 16-year-old Merli daughter, it would be a classic diagnosis of “incendiary poltergeist.” However, they began in the “peasant dwellings,” where the inhabitants are apparently not worth mentioning and “only” the peasant cottages were destroyed. Granaries are notorious for spontaneously combusting. But as for the rest of the fires, perhaps there was more of a human element to this story than is told.

The story I find much more intriguing is the 1906 Paris outbreak triggered, so it was believed, by a lightning strike that burnt a house to the ground. The idea that lightning could somehow linger in the ground and trigger recurring spontaneous fires in houses for 100 yards from the original strike is a novel one and something I haven’t run across before in the literature of the “eccentricities of thunder and lightning.”

Unusually for a story of what appears to be a fire spook, no fingers are pointed at disgruntled maidservants or pubescent girls. The burning of the hat and umbrella follow patterns in polt infestations where clothing is destroyed.  It’s a symbolic, highly personal attack, (see this previous post about the Hoffman Poltergeist.) but we do not have enough information on the households to suggest who was responsible.

The precise timing of the fires is another unusual feature as is the very strange detail of a staircase falling to crystalline dust. It does sound as if the earliest fires broke out “at all hours;” contradicting that “always at certain hours.” This may just be muddled reporting. Otherwise the French fires have an uncanny resemblance to the current conflagrations at Canneto di Caronia where residents have been filming objects bursting into flame without apparent cause.   Father Gabriele Amorth, an exorcist of the Diocese of Rome believes that the Caronia fires are of supernatural origin. Some scientists blame static electricity charges, while there is chatter on the Internet about aliens. See this analysis of the 2004 fires, which includes theories about methane and magma flows.

As for the French conflagrations, I have heard of lightning igniting subterranean coal fires.  I don’t know anything about the geology of the area. The commune of La Courneuve was the “major legume producer for the Paris region,” according to Wikipedia, but it would be in bad taste to mention methane produced by their products. My money’s on “malicious sorcerers.”

Any other accounts of lightning triggering recurring fires? Or suggestions about the origin of the Canneto di Caronia fires? Shock me with your theories at Chriswoodyard8 AT gmail.com.