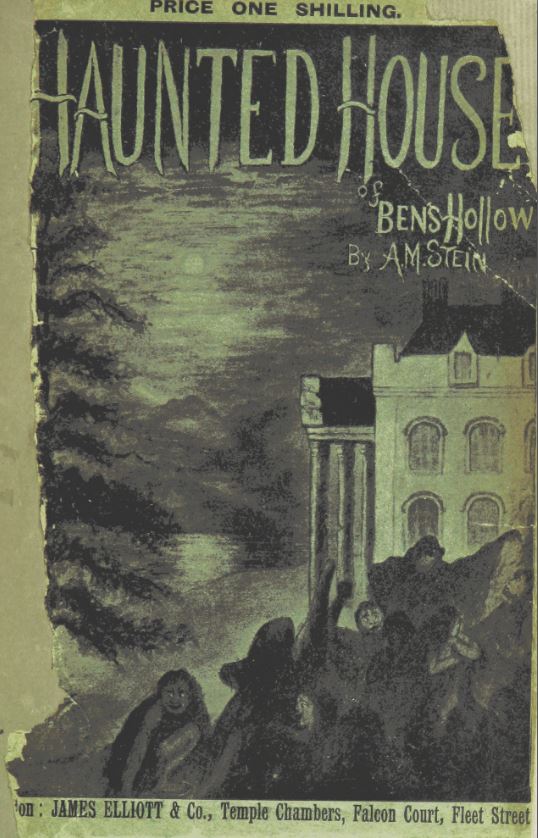 Recently a real estate agent achieved internet fame by advertising his properties with a sign that read, “NOT HAUNTED.” At least he did until some humorless neighbors objected, whereupon he changed the sign to  “Gluten-free Home.” Given the fact that few people sweep behind their refrigerators, I think he’s skirting a fine line about false advertising and–“not haunted”–how does he prove a negative? I’m thinking this has the makings of a classic horror movie: a young couple–he a skeptic, she a sensitive polt vector–sold a charming house with the understanding that it was certified not to be haunted, only to find….

I have read about agents who specifically want to handle haunted or even stigmatized properties. But this is not a new idea.

A Contemporary, in the course of a recent notice of Mr. J. H. Ingram’s new and entertaining Volume on the subject of the “Haunted Houses” of Great Britain, having expressed its conviction that, owing to the prevailing taste for mysticism, this formerly ineligible class of property was now positively coming to be sought for and in much request, the Society for Psychical Research has, as might have been anticipated, lost no time in meeting a public demand in a congenial spirit, and have at once opened a temporary Agency at their central offices. Subjoined is a specimen of their Preliminary “List” for the ensuing month.

MESSRS. EDMUND GURNEY & CO., Haunted House and Estate Agents, respectfully beg to offer to the notice of their various Clients the following desirable Properties, selected from many others at present standing on their books for disposal.

GLAMORGANSHIRE (in the very worst part of), seventeen miles and a half from a station, delightfully situated, overlooking an ancient graveyard, and within two minutes’ walk of a subterranean passage of the adjacent ruined church crypt, a thoroughly first-class crumbling old-fashioned English Mansion, in excellent mysterious condition, and furnished with every modern psychical convenience. Contains several handsomely proportioned reception rooms, all, owing to spiritual manifestations, perfectly intolerable after dusk, a picture-gallery, in which the famous “black hound” of the Poynings, the original holders of the estate, appears on the eve and morrow of great dinner parties, or the approach of any grave disaster to the local postmaster, and twenty-five sleeping apartments, in all of which, due to the continued noise as of a large iron beer-barrel filled with bricks, rolling from midnight till half-past five A.m. all over the floors and ceilings, any approach to rest is found to be practically impossible. The House is at present let, but the remainder of the lease would be parted with on the spot for a nominal premium, and immediate possession given in consequence of the desire of the present occupiers to pass the summer months in a lunatic asylum. Drainage perfect. (17,341.)

GALLOWSHURST. — This unique, charming, and agreeably Haunted Little Hunting Box to be disposed of quickly, by private arrangement. Nine rooms, stabling, capital water supply, and every convenience. Thirteen Packs, five Spectral, meet in immediate neighbourhood. Handsome carved oak staircase (reign of James the First), down which, from the top to the bottom (eight flights) a Warrior, in fall chain armour, is heard to roll heavily, head-over-heels, at midnight, on Tuesdays, Thursdays, and Saturdays, finally disappearing with a series of loud unearthly wails in the wine cellar. A Tenant with several rich, but nervous relatives, from whom he has expectations, or one desirous of good-humoredly enlivening the country visits of his friends, would find this an eligible investment. Doctor within eighty-five minutes. Price of Freehold, £25. (19,310.)

A CHARMING BIJOU VILLA RESIDENCE, most tastefully decorated and haunted throughout, To Be Let immediately. Newest style of Queen Anne furniture, with exquisitely finished Library and Boudoir to match, in which precisely at a quarter to nine every evening, a little man in the dress of the last century, wearing a blue velvet coat and bag-wig, and with a troubled expression of countenance, holding his head under his arm, appears, and says, in a melancholy voice, “I wish I hadn’t forgot it,” and then seems to disappear up the chimney. Further particulars on application. (20,191).

CYPRESS HO! BRIXTON RISE.—This comfortably-appointed and well-constructed Family residence to be Let on Lease. Fifteen rooms. Stabling if required. The Premises present unusual psychical advantages to a Tenant in any pecuniary embarrassment, there being the Spectre of a Female in White, holding a murdered child in one hand and two carving-knives in the other, permanently standing on the mat in the middle of the entrance-hall. The Spectre is so visible, that no Tradesman making application for his account, and purposely admitted, has ever been known either to smile or call again. References can be had from the Local Clergyman, and several highly respectable people living in the immediate neighbourhood, who have been repeatedly frightened into fits. Large Kitchen Garden, well stocked with evil spirits. The entire Premises to be had a bargain, with or without possession. Good opportunity for newly-married couple of position wishing to economise. Ghost and fixtures might be taken at a valuation. (22,134.)

BOGEY PARK MANSIONS. — Portions of these elegantly-fitted modern residences to be let out in any quantity to flats on application. As they have been constructed on scientific psychical principles, more especially to meet the necessities of medium-sized families, they have been roofed with self-writing slates, provided with automatic rapping doors, and telepathic communication with the principal theosophic centres, and placed under the charge of a floating hall-porter entirely independent of the laws of Matter. An Elevator and Depressor on the premises. For Prospectus and terms apply to the Manager. (24,191.)

PORTLAND PLACE, W.—One of the largest of these famous and fashionable town houses to be let furnished for the coming season. It comprises the usual reception and bed rooms, including an excellently-haunted guest-chamber, the occupant of which having once entered it to dress for dinner is never seen or heard of again. A County M.P. who is expected to show some civility to a numerous following of influential but cantankerous Constituents, would find the above a highly-desirable residence for his purpose during the progress of the Parliamentary Session. If taken for more than one night, terms moderate. (13,044.)

MIDNIGHT GRANGE.—This snug and charming little thirteen-roomed Country Residence To Be Let, with immediate possession. No occasion to burn gas or candles, the entire residence being illuminated after dark by the flitting spectres of a Quaker, three men in cloaks, a headless woman on horseback followed by an Alderman, who move continually from room to room, uttering loud yells from dusk to daybreak. Would offer advantages as a Private Deaf and Dumb Asylum, or might be turned to excellent account by an invalid and aged couple anxious to enjoy the experience of a little genuine romance and excitement at a comparatively trifling cost. Application to view to be made between the hours of one and two A.M. on the premises. Key with the Ghost. (29,139.)

Despite the somewhat labored humor, I find the cliches of Victorian ghost stories, as found in The Canterville Ghost and the work of John Kendrick Bangs to be hilarious.

I have the impression that the SPR investigators were always on the lookout for likely properties where they could negotiate short-term leases with anguished landlords whose houses had a Bad Name.  Were there ever any real Victorian estate agents who specialized in haunted properties? A few years ago, there was a woman real estate agent whose specialty was stigmatized houses. I wonder if she’s still in business. If not, someone needs to start such a business. Perhaps call it “Let the Right One.”

Mrs Daffodil shared a satirical piece about Americans who wanted to spend their Christmases ghost hunting in England called The Spook Syndicate.

Details and keys to Chriswoodyard8 AT gmail.com who lives in an UN-haunted house.