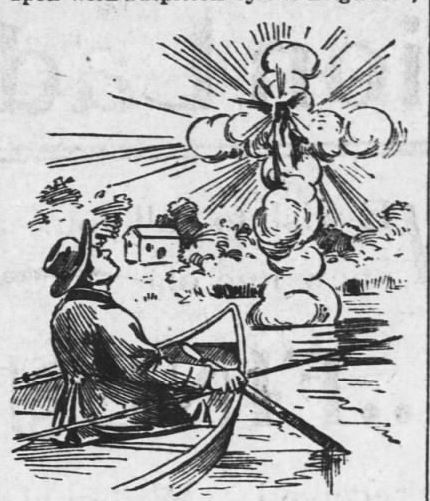 Our Lady of the Bass Fisherman

I have always been fascinated by Marian apparitions, particularly the lesser-known or “unapproved” ones. This report from New Jersey ticks both boxes: to my knowledge this vision is not found in the literature of Marian apparitions and it probably would not have been approved by the Church because the seer was a Lutheran of Quaker ancestry.

Wealthy Farmer of New Jersey Describes the Vision That Surprised Him.

Moses Depue [also spelled DePue] is known throughout this county [Warren] and the adjoining counties in Pennsylvania as the wealthiest and most staid tiller of the soil residing in Parhaquarry Township. He is a deacon in the Lutheran Church, Superintendent of the local Sunday school, and comes from a good old Quaker family, his father having been a colonel in the Revolutionary War. He has been treasurer of the township, a member of the County Board of Free Holders, and until last week a prominent candidate for State Senator. He is now looked upon with suspicion by his neighbors, and there are a few who question his veracity.

He was sitting on the front porch of his fine old farm house Sunday afternoon, when he told the following strange story:

“Last Thursday afternoon about 5 o’clock, while fishing for bass from a boat at the head of Sabo Rift, in the Delaware River, I was suddenly startled by seeing a huge white cloud arise from the stream near the Jersey shore, from which there emerged the strains of sweet music. Its strange shape and the way in which it arose, in the form of a cross, riveted me to my seat. As the cloud reached a height of about fifty feet it parted in the middle, and there, in the centre, was the form of a beautiful woman.

“Her sweet face was radiant with a strange light, her beautiful golden hair fell in heavy rolls over her shoulders, and a shining crown of silver adorned her brow. The figure, which was of natural size, was robed in a garment of white which reached to her feet. As the apparition arose and floated over the Delaware, I heard sweet songs and music from overhead.

“The figure bore a striking resemblance of portraits of the Virgin Mary, and was so dazzling in its brightness that I placed my hands before my eyes. When I recovered from my astonishment the vision had vanished.”

There is no question that Mr. Depue is firm in his belief that he saw the apparition described.

This story had a fairly wide range—appearing in perhaps a dozen different newspapers including the Jersey Journal, the Chicago Daily Inter Ocean of Chicago, and the Times of Philadelphia.  The Inter Ocean added improbably that the experience caused Depue’s hair to turn white “and that [it] produced such a change in his looks that his wife hardly knew him.” The newspaper also adds these details, which would be significant if not merely an embellishment from the Inter Ocean journalist.

“He says a very strange feeling came over him, and the very air seemed charged with a heavenly fragrance.”

“He was so overcome that he fell to the bottom of his boat and lay there in a faint for several minutes.”

The Alexandria [DC] Gazette 17 August 1896: p. 2 wrote that Depue “heard a sort of sweeping noise as though the wind was blowing among the trees,” something reported in other Marian apparitions, as well as in the Biblical account of the rushing wind at Pentecost. It also states that he was a Methodist, rather than a Lutheran.

Is the date of the child’s death perhaps significant? Depue turned 55 a few weeks earlier, on 6 August. He had lost his 14-year-old daughter less than a year before his vision. Grief and stress might have brought on hallucinations or medical issues like stroke, seizures, or migraine that could lead to seeing “auras” in the form of bright clouds, smelling heavenly odors, hearing angelic choirs, and fainting. Depue’s mention of “5 o’clock” is also ambiguous–if in the morning, perhaps there was fog rising from the river? Or–heretical thought–maybe he actually was visited by the Queen of Heaven.

Depue had much to lose by claiming to have seen the Virgin Mary. Anti-Catholic prejudice was still strong in the 1890s. His neighbors would probably have sympathized and questioned his veracity less if he had said he’d seen his dead daughter in the luminous clouds.

I also wondered if there had been something in the newspapers in 1896 about Marian apparitions that could have unconsciously triggered Depue’s vision. Adele Brise of Wisconsin, whose 1859 visions at Robinsonville were only approved in 2010, died 5 July 1896. She saw an apparition of a woman wearing a dazzling white robe, surrounded by bright lights, wearing a crown of stars on her flowing blond hair. The vision told Adele that she was the “Queen of Heaven.” There was a brief statement about Adele’s death and visions in The Weekly Wisconsin [Milwaukee, WI] 11 July 1896: p. 2. I cannot see that the article was syndicated outside of Wisconsin, but it is possible that information on the seer’s death and visions appeared in some publication not in my databases. The parallels with Depue’s vision are striking.

New Jerseyites continue to report Marian apparitions: the Virgin appeared in the backyard of Joseph Januszkiewicz in 1992 and Heaven’s bright queen visited a window in a house in Perth Amboy in 2000.  2012 was a banner year for the Virgin in New Jersey: She appeared amid flashing lights and steam at a carwash and also in the bark of a tree.

Any thoughts on Depue’s apparition? Blessed art thou if you can find other articles about Adele Brise’s vision that Depue could have seen in 1896.  chriswoodyard8 AT gmail.com