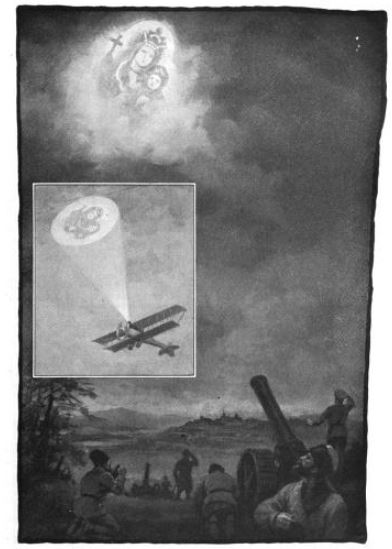 Our Lady of the Stereopticon

I once had an attendee at one of my talks explain that the ghosts at the sites I investigated were all holograms projected by apparatus run by government functionaries. This original theory gave me pause.

“But how do they know where I am going to be?” I asked.

She raised her eyebrows significantly.

I have to confess that this idea might explain a great many things, although the cost-overruns on my investigations alone may have contributed to the national deficit. And with the proliferation of the many ghost-hunting clubs and TV shows, the overtime for holographers must be enormous. Perhaps today, though, it can all be managed remotely, with drones, from some bunker in Utah.

In the early days, the technology was not nearly so developed, but, nevertheless, it seems to have been quite effective in altering the course of history, at least briefly.

Early in the war soldiers began to report seeing marvellous “visions,” which the great majority of non-combatants were incline to dismiss as hallucinations resulting from shell-shocked nerves and overwrought minds. At the battle of Mons British soldiers claimed they saw a company of ancient English bowmen on the firing line discharging arrows at the enemy and several cases have been reported in which French soldiers said they were led by a vision of Joan of Arc. At different times flaming crosses and other supernatural sights were said to have been seen in the sky over the battlefields.

These ‘visions’ have had a tremendous effect upon the fighting men who claim to have seen them. This can be readily understood as a result of the great spiritual revival due to the great war, with which also has come a renewal of superstition. In this latter fact, which military experts seemingly were not slow to grasp as an effective weapon against the enemy, may actually be found a solution of some of these strange visions which soldiers say they have seen flaming in the skies at night.

That such visions have appeared can scarcely be doubted, and since it is possible for modern science to have produced them, it is unnecessary to seek for any but natural causes. There is good reason for believing that the solution of some of these visions may be found in the workshops of the airplane and stereopticon makers.

One case in particular is cited as proof of how military science has called superstition to its aid—that of the vision seen in the sky above Przemysl [Przemyśl, Poland] during the series of terrific assaults that ended in the capture of that fortress city by the Russians early in the war [March 1915]. The story of this vision has been repeatedly told by soldiers of both Austrian and Russian armies, as well as by residents of the city. So detailed and uniform are the accounts coming from widely different sources that, judged on the basis of evidence alone, the stories must be accepted as substantially true. In Przemysl and the surrounding country there are thousands of persons, many of them claiming to be eye-witnesses, who are positive that visions of the Virgin Mary and the Christ Child repeatedly appeared in the sky above the beleaguered city, and who are convinced that these visions were of supernatural origin. It is believed, however, that the officers in charge of the defenses simply took advantage of the latest developments in flying craft and projection apparatus to spread the conviction through the ranks of both armies that the city was under divine protection.

The following explanation given by J.E. Murphy, in an illustrated account in Popular Mechanics Magazine 17 November 1917: pp 642-4], is designed to show how the Przemysl visions could have been produced easily by equipment that is now in everyday use.

“According to reports,” writes Mr. Murphy, “the visions invariably appeared at night. It is a safe presumption that they appeared only when the sky was overcast with low-lying clouds and that these were made to serve as a screen for the images projected by a stereopticon. Rain clouds are usually at a height of about half a mile above the earth. To project images so great a distance as this would be impractical. Too powerful a light would be required, and other difficulties would be introduced that might be impossible to overcome. The thing could easily be done, however, with the aid of an airplane, carrying an ordinary stereopticon, and flying from 700 to 1,000 feet below the clouds.

“Clear motion pictures have already been projected a distance of approximately 400 feet. By equipping a stereopticon with a searchlight instead of the usual arc light it would be entirely practical to project still pictures a distance of 1,000 feet. This would be sufficient for producing visions of an awe-inspiring nature, and with the exception of a special mirror the searchlight, which could probably be found without any necessity for special manufacture, all the apparatus required would be such as can be obtained at any time on the market.

“Using the standard stereopticon slide, 2 7/8 inches square, with a projecting lens having an equivalent focal distance of sixteen inches, which would make a convenient apparatus for the purpose, the image cast at a distance of 100 feet is eighteen feet, six inches in diameter. At a distance of 1,000 feet the image would have ten times this diameter, or 185 feet. Spreading the image over as big an area as this would result in an enormous loss in brilliancy if the ordinary arc light were used. With a searchlight, this could be more than overcome. To produce an image of this size the airman would fly in a level line about 700 feet below the clouds. Viewed from the ground half a mile below, the image would have the same effect as a highly luminous object thirty feet in diameter, seen at a distance of a city block. The appearance of such an object in the sky above a city, darkened because of a siege, would be a striking spectacle indeed. Soaring above the city with this simple equipment, the airman, by merely throwing an electric switch, would be able to spread hope or panic as far as his pictures could be seen.

“Several persons how saw the visions have said that they were ‘like the holy picture in the church of Czenstochowa.’ [Częstochowa] If the details of the undertaking are ever told, it will not be surprising if it is found that a photographic reproduction of the Madonna was used, for the reason that no picture in the world could have been used with better effect.

“The monastery of Czenstochowa is located about 100 miles west of Przemysl and was in possession of the Austrians at the time of the siege. The painting is familiar to the inhabitants of all that part of Europe and is so venerated that before the war it was visited annually by an average of 400,000 pilgrims, many of whom came from East Prussia, Galicia and West Russia, as well as from Poland. According to tradition, it was painted by St. Luke and there is a belief current that it is sometimes miraculously illumined. A reproduction of this picture, cast on the clouds, ‘surrounded by a halo of bright light,’ as reported, which would mean that the stereopticon slide had been made with a liberal margin of clear glass around the edges, would be readily accepted as a divine message by these people of simple and strong religious belief.

“Whatever may have been the precise means for projecting the images, there can be no doubt that they produced the effect intended. Whenever the image of the Virgin May was seen hovering over the city, the Austrians, believing they were under divine protection, took hope, while the Russians became panic-stricken. For hours after each appearance of the vision it was impossible to persuade or force the Russian soldiers to fire, and it is reported that because of this the capture of the city was delayed for weeks. In one typical case, a Russian commander, suspecting a trick by Austrian airmen, ordered a battery to fire at the vision, hoping in this way to bring down the airplane that was causing such demoralization among his troops. Instead of obeying, every man in the battery fell to his knees and prayed.”

Such religious phantasmagoria were nothing new. It was suggested at the time that the apparitions at Knock, seen on the south gable of the parish church of St. John the Baptist in 1879, were produced by a magic lantern slide projected on the church wall.

Since I do not read Polish or Russian, I found the earliest stories of the Przemysl vision in English-language newspapers from 1917, as well as Murphy’s Popular Mechanics article, also from 1917. I cannot find anything from 1915 in my limited selection of British newspapers. Does anyone have a contemporary description of the Virgin Mary visions and whether they were believed to be a pious fraud as early as 1915? After all, Murphy’s article offers a theory, not declassified intelligence.

I’ve written before about the tangle of legend and ostension hedging “The Angels of Mons,” but it runs in my mind that there were suggestions just after the reports that the Germans were using slides in the sky (Black Stereops? [joke, not name of actual programme!])  to demoralize the Allied troops. Any sources for this or was it just something beamed into my head by the men with the hologram machines?

I’ll be watching for your message. chriswoodyard8 AT gmail.com

STOP PRESSES: Here is a post  by Filip Graliński of Re-Research that says the story is unknown in Poland and it is all FAKE NEWS made up by Murphy. He also offers a reward for a contemporary account of the events above.  Thanks for sharing this, Filip! I hope you’ll keep us posted on the results.