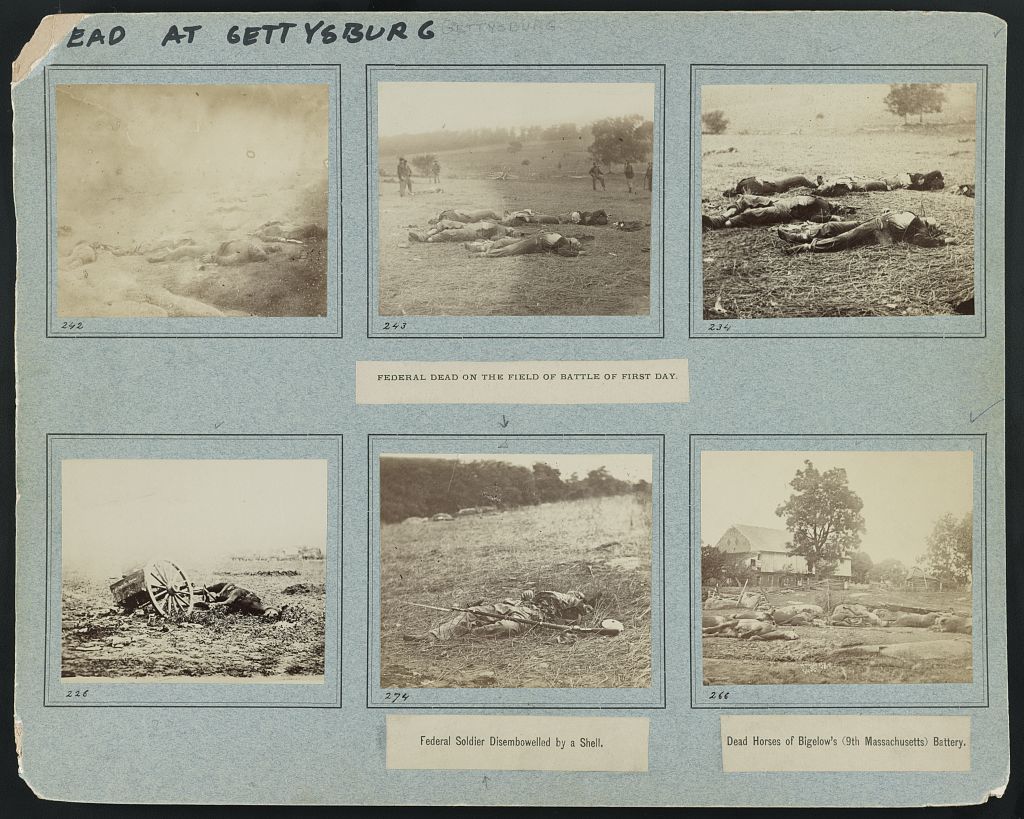 Recovering a Corpse at Gettysburg: A Marvellous Dream The dead at Gettysburg on the first day of the battle. Library of Congress images.

A strange story about the recovery of the dead at Gettysburg, fought July 1-3, 1863.

Some recent articles in various magazines concerning some strange events, induce me to send you the following account of a marvellous dream:

The gentleman who told it to me is an honoured lawyer of Portland, Me., the city of my residence. In reciting it he said, “If I had read of this in a book, I should have found it very difficult to accept it, but know that it is true.” He has recently conferred with the brother to whom reference is made, and the latter confirms the truthfulness of his narration. Captain F., the brother of my informant, was killed in the battle of Gettysburg.

The night before his death, he dreamed that he led his company into the battle, and that, early in the day, he was shot in the pit of the stomach and fell dead. He rose from sleep greatly depressed.

The colonel of his regiment perceived his gloom, and, after much questioning, discovered the cause. “You are unwell,” the· colonel said, in kindest tones, “you must not go into the fight; I will have you sent to the rear; you are too valuable an officer for us to lose; I will have the doctor order you to report yourself on the sick list.”

“No,” was the reply, “it shall never be said that Captain F. suffered his men to go into battle, without leading them himself.” No persuasion could induce him to keep out of the fight. He led his men calmly; early in the battle, he was shot through the pit of the stomach, and fell dead.

The news of his death was telegraphed to his brother in Portland. He started at once for Gettysburg, going by way of Baltimore. Arrived at the field, he saw some soldiers of his brother’s company, sitting near a rail fence. Pushing on, he passed a brook, which had risen rapidly a day or two before, and had overflowed its western bank. The ground beyond was, therefore, very oozy, and my friend found it difficult to walk. He saw the board bearing his brother’s name, and so marking the temporary grave. But he soon discovered that he could not raise the body without some assistance.

Accordingly, he returned to the group of soldiers, and asked them to load themselves with the rails of the fence. This they did, and all advanced to the grave. It was necessary to lay down some of the rails in order that they might walk and get closer to the grave. Then my friend requested two soldiers to put two rails, one on each side, down into the earth so as to reach below the knees of the body. The others placed rails below the waist. My friend himself bared his arms and placed them under the neck. At word of command, all lifted, and the body was brought to the surface. Uncovering the face, it was found to be discoloured by mud, and Mr. F. instinctively reached for his handkerchief, but found that he had removed his vest as well as his coat. Remembering that his handkerchief was in one of the pockets of the vest, he laid the body down, went to a hillock nearby, returned, wiped the face, and then, reverently covering it, had the body put in the coffin he had purchased at Baltimore. Leaving the field with his precious burden, he reached Portland, and went to a neighbouring town where his parents were awaiting him. A brother had come from the northern part of the State.

After a brief interview in the house, this brother said that he wished to have further conversation in the barn. Arrived there, he said, “John, when you arrived at the field of Gettysburg, did you meet some soldiers of A.’s company, sitting near a rail fence?”

“I did,” was the surprised reply.

“Did you return to the soldiers, ask them to take rails, and go with you?”‘

“I did; but in God’s name, why do you. ask these questions?” It seemed to him as if his hair was rising up all over his head.

“I will tell you, by-and-bye. Did you have rails put beneath the knees and waist? Did you raise the head yourself? Did you wish to wipe the face, go to a hillock for your vest, return, wipe away the discolouration caused by mud and place the body in a coffin you had brought with you?”

“I did; but how do you know all these things?”

In reply, the brother stated that a neighbour, a lady, had come to his house a few days before, crying out, “I have had such a horrible dream! A. is killed. John has gone on to get the body.”

Then  she recited all the details given above.

How can these things be? may well be said. I send you the account, Mr. Editor, to be used as you may deem best. Mr. F., my informant, will confirm all I have written.  Surely this is a marvellous dream. Who will explain it?

Who, indeed, will explain it? It seems unlikely that the brother had heard the details of the body removal elsewhere and tried to hoax John by repeating them as a lady’s dream. What would have been the point at such a tragic moment? Perhaps all we can say is that this fits the Victorian pattern of a token-of-death dream.

In addition the incident offers a glimpse into death on the battlefields of the Civil War. Some wives, sweethearts, children, and other civilians hovered anxiously on the fringes as battles raged. Soon after the Battle of Gettysburg relatives began flooding into the area trying to find their loved ones. If they were lucky, they might locate them in time to say goodbye in a field hospital. The summer heat made quick, if temporary, interment essential; the thunderstorms that followed the battle rendered the search for graves more difficult. Searchers saw the carnage first-hand as they dug for disfigured and decomposing corpses in the mud. The rituals of a Victorian death-bed had been denied to those who fell on the battlefield; now the only consolation families had left was to reverently coffin their dead and bring them home.

Mrs Daffodil tells of Elizabeth Thorn, the “Angel of Gettysburg,” who nearly single-handedly dug over 100 graves to bury the battlefield dead, and of a G.A.R. veteran who decorated his own grave at Gettysburg National Cemetery.