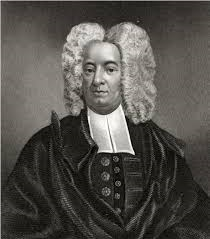 It is always intriguing to find ancient prophecies which later come true. This one was written to the Rev. John Moody by Cotton Mather, the author of Wonders of the Invisible World, and figurative fanner of flames in the Salem witchcraft trials.

It was the poet Darwin that prophesied in one of his compositions the advent of the steam car; and in the following article we find a correct description of a modern steamboat, written, or at least supposed to be so, nearly two centuries ago, by the veritable Cotton Mather, the wonder loving divine, and the author of the far-famed Magnalia, replete with witchy and ghostly narrations, and divers wonderments. The manuscript was said to be found amongst a lot of old and musty papers, in a heap of garret lumber, in one of the oldest houses in Newbury, not a great while since. Here is the matter as we find it:
“Boston, Iune ye 29th 1692

The “far-famed” Magnalia Christi Americana (1702), was Mather’s history of the religious development of the Colonies, including the Salem Witch trials, and the founding of Harvard University.

Here is a bit from the Darwin citation:

Soon shall thy arm, UNCONQUER’D STEAM! afar
Drag the slow barge, or drive the rapid car;
Or on wide-waving wings expanded bear
The flying-chariot through the fields of air.

That said, does anything about the prophecy’s language and the spelling seem a touch peculiar? Yes? Congratulations! You get an exploding cigar, a box of chocolate-covered soaps, and April Fool’s Day greetings. The prophecy was the joke of Frederic Thomas Somerby, [1814-1870], an artist, satirist, and avid Boston newspaper correspondent. Here’s a brief introduction to the “Mather” prophecy:

A Modern Ancient-prophecy. The following jeu d’esprit was printed in the Boston Herald, on the fourteenth of February, 1855. It was written by the late Frederic T[homas] Somerby of Boston , who was a frequent contributor to the newspapers under the signature of “CYMON.” He wrote a few years previous an ingenious April-hoax, which was printed in the Boston Post, on the morning of the first of April, which is said to have deceived the senior publisher of that paper, so that he went to the Boston Common, to see the cave described as discovered there. Mr. Somerby was not much of an antiquary; and his spelling, though curious, does not much resemble that of Cotton Mather. Boston, Mass.

The Historical Magazine: And Notes and Queries Concerning the Antiquities, History, and Biography of America, 1873

Dean, a scholar and bookbinder, was an active member of the New England Historical Genealogical Society, serving in various official capacities for the society and editing its journal.

The prankster’s brother, Horatio Somerby, was highly respected as an historian and genealogist. He had moved to England where he worked to help New England families trace their British ancestors.  I suspect that this piece was Frederic’s little dig at his brother’s historic pretensions and, perhaps, at humorless antiquarians.

Let me ramble a bit further: what about that April 1 cave hoax? That must have been a dandy, but I have not been able to find the original article yet. Here’s a squib on the affair:

A startling announcement was made in the Boston papers that a cave was discovered, which drew many persons to the Parade Ground near the Boylston Street end of the Common, who paid a small fee to enter the canvas covering, but before the close of the day everyone learned that they had been April fooled. [Another article adds that there was an excavation and a rough staircase to go down into the “cave.”]

Are cave hoaxes in the Boston area, some kind of tradition? In Boston Events: Boston for 250 Years, 1886 we find these cryptic notes:

There are real caves near Boston: Purgatory Cavern in Sutton and some habitable caves in Norton, about 40 miles from the city. There are also, of course, the mysterious stone chambers that dot New England, described variously as Celtic temples, Stonehenges, broches, Indian structures, or root cellars. The imaginary [?] caves at Lewis Wharf and Pemberton Hill may have inspired Somerby’s jeu d’esprit.

If you have a copy of the original April Fool’s prank article about the cave on Boston Common, or any other information on Boston caves, real or fake, please send to the easily-gulled Chriswoodyard8 AT gmail.com.

And on this April Fool’s Day, watch out for ye Dyuelish Orthografie–ytte portendethe no goode.