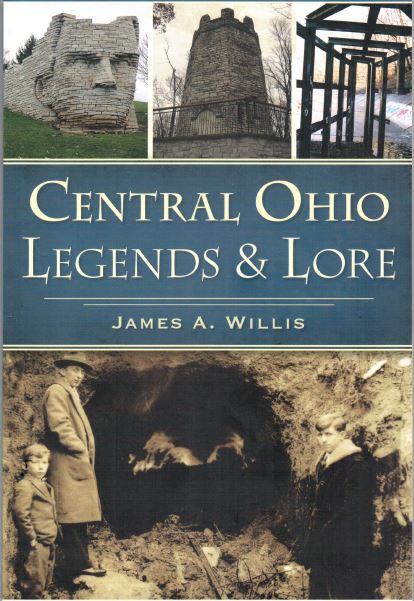 Central Ohio Legends & Lore “Legends from the Heart of Ohio” by James A. Willis.

I first ran across James Willis as one of the co-authors of the book Weird Ohio. He’d obviously been bitten by the ghost bug: in 1999 he founded The Ghosts of Ohio. He followed up Weird Ohio with The Big Book of Ohio Ghost Stories and Ohio’s Historic Haunts: Investigating the Paranormal in the Buckeye State. Now he returns to his weird roots with Central Ohio Legends & Lore, easing into the weird in the opening section with stories from four haunted sites: Camp Chase Confederate Cemetery, Fort Amanda, a railway bridge over the Kokosing River, and Thurber House in Columbus. He then introduces us to some legendary characters: Johnny Appleseed, Chief Leatherlips, Annie Oakley, William Quantrill—and, new to me—Andy D-Day.

Legends are all very well, but it’s villains who I find far more interesting and here we have murderers, like young Albert Frantz who shot his girlfriend and threw her body off of a bridge in Dayton, resulting in a trial where he was confronted with her head in a glass jar. (Spoiler Alert: He did not come to a good end.) While I’ve written about Andrew “Hatchet Man” Hellman, Willis fleshes out more shocking details of this early family annihilator and even gives us the murderer’s face from a newspaper account to go with the horror. Still more shocking (read: “titillating”) to Jazz-Age Columbus was the trial of the oversexed Dr. Snook and his much-younger lover/victim, medical student Theora Hix.

Ohio, as we saw in Weird Ohio, is packed with unusual sites. Willis shares stories of a legendary place not far from my stomping grounds:  “Frankenstein’s Castle” in Kettering. It is also known locally as “the Witches’ Tower” or the “Patterson Tower.”  It’s one of those ominous-looking structures that just cries out for legends to be woven around it: it was built to watch out for Indians or British Redcoats! A Civil War widow threw herself off the top and now haunts the area! When I was researching the site, none of those stories came to light—they are all more modern, internet-era legends. The tower was the site of a terrible tragedy, but I’ll let Willis share the details. (Incidentally, I was baffled by how a tower in Dayton could be “Central Ohio,” but Willis explains that the state has been chopped into three parts the width of the state.)

One of the more fascinating historical episodes was “The Many Graves of William Quantrill.” Born in Canal Dover, Ohio, and a Confederate guerrilla, “bushwhacker,” or mass murderer, depending on your sentiments. Quantrill’s remains were said to have been dug up several times, kept in a box, offered for sale, and memorialized in three states. His eerie wax facial reconstruction haunts the Reeves Victorian Home and Carriage House Museum in Dover.

I was also intrigued by Annie Oakley’s lawsuit over a drug-addicted burlesque dancer and the circumstances behind the Kenyon College fraternity initiation death of Stuart Pierson, who is believed to haunt the train trestle over the Kokosing River.

Of special interest were the screaming woman of Ohio Players’ song “Love Rollercoaster,” and Stonewall Cemetery, of anomalous construction and many legends, also known as the Presidents’ Burying Ground. Perhaps my favorite story was “James Thurber’s Haunted House.” I’ve written about Thurber’s “night the ghost got in,” but Willis, using digitized newspapers not previously available, may have uncovered the secret of the Thurber House haunting at last.

I have to say that I found the Tuttle Crossing and Polaris Mall folklore less than compelling—these urban legends are, like Cry Baby Bridge stories, ubiquitous. It isn’t surprising that they should be told of central Ohio malls; they’re told about malls everywhere. I would rather read about a legend unique to Ohio—like the Gates of Hell in Clintonville. Water-filled tunnels lined with satanic graffiti and strange metal gates: now there’s a home-grown urban legend!

In the same, “Urban Legends” section, Willis is at his best when sorting through the lore of the “Woolyburger” Cemetery, home to satanic cults, red-eyed monsters, ghostly girls, and the world’s youngest serial killer, “Willie Butcher.”

This is the first of three books from Willis on Ohio’s legends and lore, so stay tuned!