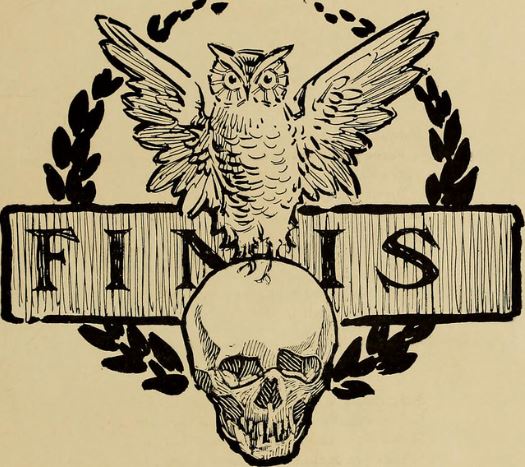 Death by Owl Putting FINIS to a life of a woman scared to death by an owl.

Yesterday began the “International Festival of Owls,” and while we do find some touching stories of owls as pets and grudging acknowledgment that they keep down vermin, the papers of the past are more likely to report on owls killing domestic fowls or sheep, or on monster owls with 4-foot wingspans. Owls are silent, taloned killers and they have long been heralds of death. Even today some people believe that their call is a token of doom. It must have felt that way to this unfortunate Long Island woman:

OWL IS CAUSE OF SUDDEN DEATH

Dies When Bird Flies Against Window

New York, June 15. Mrs. Josetta Coonan O’Neill, wife of James T. O’Neill, assistant corporation counsel in Brooklyn died suddenly in their summer home in Argyle Park, near Babylon, L.I., early yesterday, from apoplexy caused, it is believed, by fright when a screech owl flew against the window of her room just before she retired. Mrs. O’Neill for two days had lived in fear of the owl, a dark-feathered bird that had followed her about the grounds and had passed and repassed her husband and herself when they went out. Her dread is believed to have reached a fatal climax when the owl flew against the window in the darkness, screeching.

The body of Mrs. O’Neill last night lay in the home of her mother, Mrs. Thomas Coonan in Seventh street, Brooklyn, on the Park Slope, the home from which the young woman went forth a bride only last December.

Mrs. Coonan, who is an invalid, was in the Argyle Park home of her daughter when Mrs. O’Neill died. There was no warning that death was to visit the house. Mrs. O’Neill, only five minutes before her death, had passed into the room of her mother and kissed her good night. The younger woman then apparently was in her usual health. It is thought, however, she was suffering secretly through her fear of the owl, which at that moment was screeching dismally from the limb of a tree near the house, and that she concealed her fear for her mother’s sake.

Mrs. O’Neill was in the railroad station in Babylon at 5.40 o’clock Tuesday afternoon, when her husband arrived from Brooklyn, and together, as usual they walked to Argyle park. The owl was not then in evidence, for it was still daylight. After dinner, however, when O’Neill went out to rake a flower bed he had been preparing for his wife, the owl began to screech nearby. The flower bed is in front of the house and only 50 feet from the front porch where Mrs. O’Neill sat watching her husband. Suddenly she uttered an exclamation and her husband looked up to catch a glimpse of the owl that swiftly passed within a foot of his face, crying as it passed.

Three times the bird made the passage in front of him until, in exasperation; he threw his hoe at it. The hoe went over a fence and the owl perched again in a tree, letting out a succession of raucous screeches. To O’Neill it seemed as if the bird mocked him, and he tried to hit it with a stone, but the owl only flew away unharmed.

Mrs. O’Neill was much disturbed by the actions of the bird, which the night before had pursued her and her husband in their walk to the village. O’Neill hardly could persuade her to go out for their usual walk, but at last she went, though expressing a fear the owl would give them no rest. She said the persistence of the bird was an omen. Her husband treated the subject lightly, saying he would get a gun the next day, and end the bird and the omen too.

But Mrs. O’Neill’s fears of being pursued quickly were verified. Scarcely had they gained the street when the owl, out of the darkness, darted past their faces, uttering its hoarse scream. The bird, O’Neill observed, waited until it was passing before it screeched. Once it went so close to them its wings fanned their faces, and Mrs. O’Neill stopped, trembling, and grasped her husband’s arm, saying she could go no further. They had walked no more than 300 yards from home. They just had turned back when the owl again passed them, screeching. All the way to the house the owl passed and repassed, and at last Mrs. O’Neill’s terror became so great she released her husband’s arm when they almost had reached the steps and ran into the house, where she sank trembling into a chair. Her husband reassured her and afterward they sat on the porch and watched for the appearance of the bird, which at intervals flew close to the steps. By that time Mrs. O’Neill seemed to have recovered her courage, and laughed and chatted with animation. Afterward they went into the house where O’Neill wrote letters and Mrs. O’Neill read and commented on some of the articles she looked at. She still maintained the air of cheerfulness. It was almost midnight when they thought of retiring. Mrs. O’Neill’s last act was to kiss her mother.

Just after the wife entered their room, which is on the second floor, O’Neill left it for five minutes. It was in his absence the owl is thought to have struck the screen of the window. When O’Neill returned his wife apparently was asleep. Believing she merely was feigning sleep the husband pinched her earl slightly but she made no response. Then, becoming alarmed, he looked closely at his wife and observed her pallor. He called her mother and the maid and telephoned to Dr. Harold E. Hewlett of Babylon, who on arriving, said Mrs. O’Neill had died from apoplexy.

At dawn yesterday, the owl again flew near the room where lay the body of Mrs. O’Neill. In a second flight the bird flew against a screen door which gives egress from the room to a balcony.

The nurse who had been summoned and several others in the room saw the bird hurl itself against the screen as if to break its way into the room. It uttered its cry, fluttered to the floor of the balcony and then again flew to its favorite perch in a tree nearby. O’Neill, when asked last night about the owl, said it had persisted in following his wife and himself. The Argyle park home has been owned by the O’Neill family for 20 years, but Mr. O’Neill said he never had seen the owl until two days ago. O’Neill said the owl was not larger than an ordinary pigeon, but had a great spread of wings. Springfield [MA] Union 15 June 1911: p. 2

Now, I’m sure a naturalist would hoot at the idea that the owl had anything supernatural about it, and perhaps rightly so. Owls are intensely territorial. The “favorite perch” could have been its nest and it might have been defending its eggs or owlets. Owls are well known for attacking people who come too close. They sometimes hurl themselves against windows, believing the reflection is an intruder. One owl even attacked a window of a room where a stuffed owl was kept. But it does seem a little odd that the bird only showed up two days before Mrs. O’Neill’s death and that it attacked the room where her body was laid out.

Rational explanations aside, the owl is, of course, a token of death.  The unfortunate Mrs. O’Neill believed it had come for her and that she was doomed. Other headlines for this story also emphasized a belief that Mrs. O’Neill was scared to death. “Dies from Fear of Owl,” “Dread of Owl Causes Death.” “Bride of Three Months Scared to Death by Owl.” Even the New York Times’ headline read: “Hears Owl Screech; Dies,” although the Times article mentions that Mrs. O’Neill was also grieving for her father, who had died five weeks previously and that she had had a “nervous breakdown” over his death. In a post on people who died of fear, I cited “broken-heart syndrome,” which is triggered by a sudden loss or shock.

The “superstition” of believing that owls hooted of death was supposed by all educated and right-thinking people to have been wiped out by 1911 (except in isolated pockets of rural or ethnic ignorance).  A 1912 article rather scornfully stated that the barn owl was the source of more ghost stories than any other living creature, with its uncanny cry and ghastly face. Owls trapped in chimneys and furnaces were exposed as the source of haunted house rumors; eerie moans in burial vaults were revealed to be roosting owls. Such things really took all the fun out of folklore. But despite ridicule, there was a deeply-rooted belief in the malignity of owls.

A gravedigger had this to say:

“It seems like the graveyard is their natural element, especially when there’s lots of big trees and ivy-grown vaults. To hear an owl hoot in the night here, as I do sometimes, when everything is still, would make your blood run cold. They don’t keep it up right along through the night, so you can get used to it; but it will be quiet for a long time–so still that you get almost afraid to breathe, and the falling of the leaves startles you–then all of a sudden you’ll hear the long hoot-too-toot and a dull rushing in the air, as a big owl sails by and drops down upon a vault beneath the hill…

“I can always tell when there’s going to be a busy time here,” he continued. “When the owls are particularly plenty and keep up an awful hooting during the night I look for the funerals next day. They always come. When the owls hoot, it means funerals.”

“I don’t like owls,” the old man went on, scraping the red clay from his spade with the toe of his boot. “I don’t like ’em; they don’t mean good. Dead people are good enough in their way, I get used to them. But owls are a kind of half-dead and half-alive bird, and if t’warnt that I knew they couldn’t get at ’em, I’d believe they lived on dead people.” The Independent Record [Helena, MT] 9 December 1883: p. 9

A half-dead and half-alive bird. A perfect description of the skull-faced barn owl, silent and deadly one moment; screaming as if knifed the next. You’ll find a selection of owl calls here. Even knowing what is coming, they are unnerving.  A screeching owl dive-bombing out of the dusk; hitting window screens; screaming like a banshee–it is like something out of The Birds and it is no wonder that, in her weakened state, Mrs. O’Neill felt that a taloned angel of death had come for her. Death is the thing with feathers…

This post was originally published in 2015.  Mrs Daffodil reported on A Grateful Little Owl.