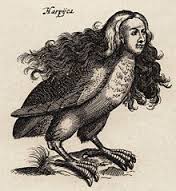 The Bird Woman Horror Much like the horror of a Harpy

Fresh from thinking about the monsters produced by the theory of Maternal Influence and why pregnant women should not look at parrots or monkeys, I found the following narrative in Strange Things Among Us, by Henry Spicer.  Spicer, who died in 1891, was a British writer of short stories, novels, and plays and was frequently published in All the Year Round, the weekly literary magazine founded and owned by Charles Dickens.  He also wrote a rather amusing, non-fictional look at the first flush of Spiritualism in the United States in the early 1850s.

The narrator, a girl of the servant class, but of rather superior education and manners, had called on the writer’s sister on the subject of a place to which she had been recommended, and in the course of conversation, related the following as a recent experience.

The advertisement, in which she had set forth her willingness to take charge of an invalid, infirm, or lunatic person, or to assume any office demanding unusual steadiness of nerve, was replied to by a lady whose letter was dated from a certain locality on the outskirts of a large commercial city, and who requested her attendance there at an appointed time.

The house proved to be a dingy, deserted-looking mansion, and was not rendered more cheerful by the fact that the adjoining tenements on either side were unoccupied. It wore altogether a haunted and sinister aspect, and the girl, as she rang the bell, was sensible of a kind of misgiving for which she could not account. A timid person might have hesitated. This girl possessed unusual firmness and courage, and, in spite of the presentiment we have mentioned, she determined, at all events, to see what she would be called on to encounter.

A lady-like person, the mistress herself, opened the door, and, conducting the applicant into an adjacent apartment, informed her in a few words that the service that would be required of her was of a very peculiar nature, imperatively demanding those precise qualities she conceived her to possess. It was right, she added, to mention that the family lived in great seclusion, partly from choice, partly from necessity, an impression having gone abroad that there existed something strange and evil in connection with the residence, which was, in reality, known in the vicinity by the title of the “haunted house.”

With these preliminary warnings, the lady suggested that the applicant might wish to reconsider her purpose. The latter, however, having little fear of anything human, and none at all of apparitions, at once agreed to the terms proposed, stipulating only that the cause of the strange reports affecting the mansion should be a little more clearly explained, and her own particular duties defined.

The mistress readily assented to both conditions, and, leading the way to a ground floor apartment at the back, unlocked the door and turned the handle as about to enter, but, checking herself suddenly, warned her companion, without sinking her voice below its ordinary tone, that she was about to be brought face to face with a spectacle that might well try the strongest nerves; nevertheless, there was nothing to fear so long as she retained her self-command. With this not very reassuring preface, they entered the room.

It was rather dark, for the lower half of the windows were boarded up; but in one corner, on the floor, was plainly distinguishable what looked like a heap of clothes flung together in disorder. It appeared to be in motion, however, and the mistress of the house once more turning to her follower had just time to utter the mysterious words—

“Don’t be frightened. If she likes you, she’ll hoot; if she doesn’t, she’ll scream”

When from the apex of the seeming heap of clothes there rose a head that made the stranger’s blood run chill. It was human indeed, in general structure, but exhibited, in place of nose, a huge beak curved and pointed like that of an owl. Two large staring yellow eyes increased the bizarre resemblance, while numerous tufts of some feathery substance, sprouting from a skin hard and black as a parrot’s tongue, completed this horrible intermingling of bird and woman.

As they approached, the unhappy being rose and sunk with the measured motion of a bird upon a perch, and presently, opening its mouth, gave utterance to a hideous and prolonged “tuwhoo!”

They were now standing as it were over the unfortunate freak of nature.

“Have you courage to lift her?” inquired the lady. “Try.”

The girl, though recoiling instinctively from the contact, nerved herself to the utmost, and, putting her arms beneath those of the still hooting creature, strove to raise her up. In doing so, the hands became disengaged from the clothes. They were black, and armed with long curved talons, like those of a bird of prey.

Even this new discovery might not have made the girl’s courage quail, had she not, in raising the creature, observed that she was not, as had seemed to be the case, crouched on the ground, but balanced on an actual perch, or rail, round which her feet closed and clung, by means of talons similar to those which adorned her hands.

So irrepressible was the feeling of horror that now overcame the visitor, that, after one desperate effort of self control, she was forced to let go of the thing she held. A wild, unearthly scream that rang through the house marked the creature’s change of mood. The baleful eyes shot yellow fire, and scream after scream pursued her as she fairly fled from the apartment, followed at a steadier pace, by the lady.

The latter took her into another room, did all in her power to soothe her agitation, and expressed no surprise when the girl declared that ten times the liberal amount already offered, would not tempt her to undertake such a charge.

Such then are specimens of the “Strange things” unknown, mis-related, or disbelieved, yet constantly occurring among us; and if, in grouping them together, in this slight and superficial manner, the attention of abler minds should be attracted to the analysis of one or more of the points alluded to in the earlier portion of this work, such as may seem most prophetic of useful result, the writer’s purpose is attained.

Lastly, let it never be forgotten that, as science progresses, as the means of working the mine of knowledge augment in our hands, we must be prepared for new and greater discoveries than those which, in the arrogance of science pronounced impossible, are now the familiar playthings of a child. No fear that we shall arrive too soon at the summit of human knowledge. There is fear that we may mistake a lower elevation for that exalted rest.

Strange Things Among Us, Henry Spicer, 1863

What was it?  The horror seemed like a cross between the political cartoon of Boss Tweed as a vulture and Olga Baclanova at the end of Tod Browning’s Freaks. The author prefaced this story with the remark that it “is grotesque enough, and, though it actually occurred in England but a short while since, would scarcely be out of place in a book of German dreams and fancies.”

The other content of Strange Things Among Us is a jumble of Fortean topics: ghosts, mesmerism, electrical anomalies, séances, Spiritualism, omens, premonitions, death-bed phenomena, dreams, and prophecies. As was the practice of the time, the pages are littered with pseudonymous initials and dashes: “Miss M.F___ was induced by the strangeness of the circumstance to mention it to Dr. H___, a physician, then staying in the house….,” which does not inspire confidence. However, in his preface the author seems to take a strikingly Fortean stance of a) we know very little about the strange things of the world and b) it is important to recount these strange things as accurately as possible:

Well has it been written: “We know not the Alpha of creation. At the very threshold of natural knowledge we stumble and fall. Every day brings the conviction of some error or mistake. The more we study God’s works the deeper is the feeling that the growth of wisdom is just the increasing knowledge of our ignorance. A lifetime is too short to understand the alpha of any single science upon earth.”— (Protoplast.) Applying the remark to our present subject, it is, no doubt, to this fruitful misgiving— which might in reality be termed a better discipline of reason—that we are indebted for many an interesting narrative which would else have never have passed the bounds of a family circle, or, in doing so, would have at least been carefully denuded of such corroboration as name, place, and time afford. In the incidents to be hereafter related these have been supplied without scruple, and without desire for any greater reticence than the writer’s discretion might impose.

The circumstances of each case have been verified with unusual- care, because another object than simple curiosity, or the making a readable book, suggested the inquiry. Still, it may be proper to call attention to the fact, that persons who have been, or who have conceived themselves to have been, the witnesses of so-called supernatural appearances, are, in recalling the occurrence, never wholly free from the dominion of that exalted feeling which accompanied it, and which is ill-calculated for minute and accurate detail. He, therefore, who undertakes to relate a ghost story at second-hand often incurs the difficult duty of rendering incoherences in such a manner as shall not, on the one hand, foster deceit, on the other, bring down unjust doubt upon what is more correct than clear.

To assist analysis, we must compare. To aid comparison, the least possible reserve should unite with the closest possible adherence to facts, so far as (after passing through the ordeal of susceptible imaginations) facts can be fairly ascertained.

Whatever the facts of the bird-woman, those talons will haunt my dreams….