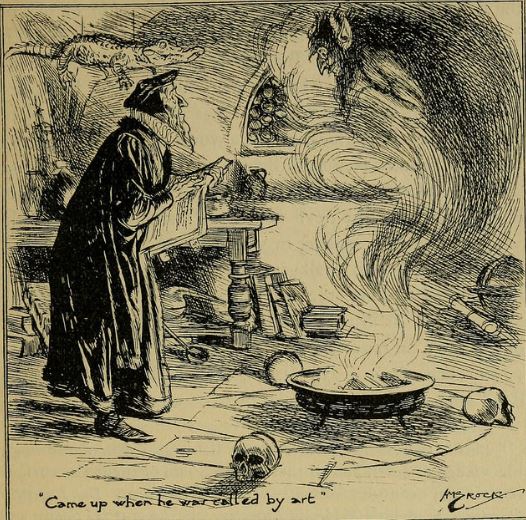 The Expenses of Necromancy Faust and the Devil, 1903

As I have previously remarked in these pages, I find myself out of sympathy with occultism and its rituals. There are too many fanciful flights of philosophical abstraction; too many hours spent out in the garage bottling sylphs; too little practical business. “Adept” is rather a misnomer when they don’t think to pick up a gallon of milk or a pizza on the way home from the Working. So I was amused to find a kindred spirit expounding on the expenses of necromancy, excerpted from a review of a book on the occult sciences.

Skipping the rest of the White Magic, we may try good old Necromancy, evoking souls of the dead. Anybody can fulfil the conditions who has a little money at command for the purchase of the requisite instruments, and has occasionally the privilege of possessing his soul in solitude.”

A little money! Why it would cost thousands. First you take, if possible, the room in which the person to be evoked expired. Then you put up olive-wood shutters (which you must have specially made), and shut them.

Then you hang and carpet the whole room with tapestry of emerald green silk, which you must do yourself, with copper nails. You must collect the favourite bric-a-brac of the deceased in the room, or, if the family has disposed of that, a full-length portrait of him in the last suit he wore will suffice.

This must be veiled with white silk, fastened up with copper, and crowned with his favourite flowers, say primroses. Before this, erect an altar of white marble, with four columns terminating in bull’s feet. A copper five-pointed star must be emblazoned on the altar.

In the centre of the star, put a copper chafing-dish full of dry alder and laurel chips. Add a censer full of incense; the skin of a white and spotless ram must be stretched beneath the altar, with a polychrome pentagram. Erect a copper tripod, with a chafing-dish foil of olive wood.

Get a high candelabrum of bronze, with one pure wax-taper, which alone is lit when you come to business. Enclose altar and tripod with a magnetized iron chain—O shade of Bulwer Lytton !—and with garlands of myrtle, olive, and rose.

Facing the portrait on the east put a canopy, draped in emerald silk, and supported by two triangular columns of olive wood, plated with pure copper. At the foot of each column there must be a sphinx of white marble, with hollow heads for spices.

The apparition will come off under the canopy. You must wear a vestment of azure, fastened with copper clasps, and one emerald. Crown yourself with a tiara of twelve emeralds and a wreath of violets. A copper ring with a turquoise must be worn.

You must wear blue slippers, and carry a swan’s-feather fan. A slight refection of bread and wine must be provided. There is a good deal of incense-burning, and prayers after the religion of the defunct—say, those of the U. P. Kirk—must be pronounced.

Then the spirit will appear; but it won’t tell you what to back for the Derby, nor discover buried treasures; nor, in fact, come to practical business.

This does not appear wholly a frugal kind of ceremony. Let us put it in the form of an account:— 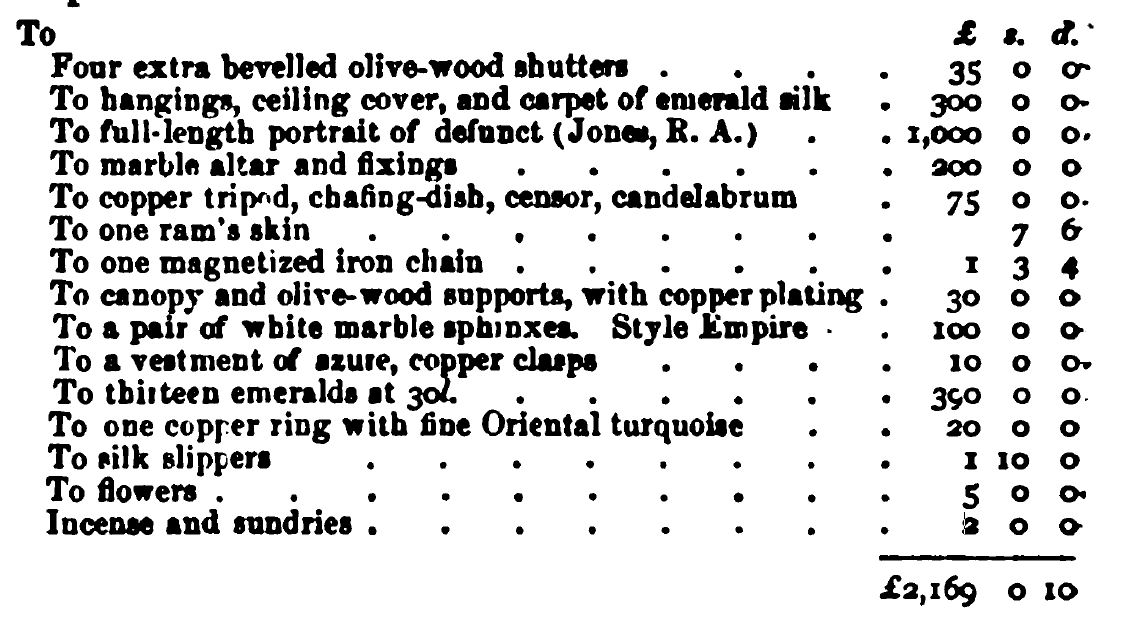 It comes to a good deal of money, but a really fine portrait by an eminent artist should not be grudged, and we have stated the emeralds rather low. The authority for all this is a recent French writer, P. Christian, Histoire de la Magie, Paris, 1871, 8vol.  By the way, sometimes three attempts at intervals of a year are necessary for success, but many of the properties will keep.

“It must be clear from the above ceremonial that there is nothing repellent to the most cultivated spiritual sense in the rites of lawful necromancy.” No, they are rather tasteful than otherwise. But we do not think they meet the demands of a democratic age. Many will prefer the common table, and Medium, at a guinea. Without this expensive upholstery, modem Spiritualism guarantees to us results phenomenally tremendous, when the Medium is not tied up in a bag. The Medium “is a noble animal,” but, if closely watched, “he will not do so.”

The excerpt above is from a review of The Occult Sciences by Arthur Edward Waite.  I’ve left off a good bit of the actual review of Mr Waite’s book. Some sample savagings:

“The so-called Occult Sciences contain some empirical directions, lost in the densest and dullest fog of foolish verbiage.”

“Far from being an entertaining book.”

“Is a farrago of words by so-called adepts a philosophy?”

“Why was this book written and published?”

Waite was not a man to be deterred by one small-minded critic. He went on to write many, many, many books on esoteric subjects. And to co-invent the Rider-Waite Tarot Deck. Did he practice what he preached and splurge on emeralds and a really fine portrait? Or, like the eponymous heroine of “Mrs Packletide’s Tiger,” by Saki, did he give up on luring the dead on the grounds that “The incidental expenses are so heavy.”?