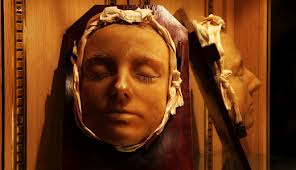 Mrs Daffodil’s Aide-memoire: This is a curious story, mingling fact and completely falsehood. Mary Queen of Scots was never imprisoned in the Constable’s Tower (which was built in the  nineteenth century on the site of a medieval tower that was used to house prisoners during the reign of Elizabeth I)  or anywhere in the Tower complex, and she was certainly not led out of it to her death in the “tower quadrangle.” She was held captive in various manor houses well away from London and was executed at Fotheringhay Castle in 1587.

1900 was indeed an annus horribilis for the Queen. Queen Victoria’s second son, Alfred, Duke of Saxe-Coburg and Gotha and, until 1893, the Duke of Edinburgh, died 30 July 1900. Prince Christian Victor of Schleswig-Holstein was Queen Victoria’s grandson by her daughter Helena. He died 29 October 1900 of typhoid fever in South Africa. The Dowager Lady Churchill was Senior Lady of the Bedchamber and, as the article says, a close friend of Queen Victoria. She was found dead in her bed at Osborne House 24 December 1900, aged 74.  Queen Victoria mourned in her diary: “It is a horrible year, nothing but sadness & horrors of one kind & another.”

Mary Queen of Scots was a romantic figure to the Victorians and an overwhelmingly popular apparition (as she is, even today) so perhaps it is natural that she was believed to be the wailing ghost. The Habsburgs had their White Lady of the Hohenzollerns, who appeared before Imperial deaths. One wonders if the British Royal family felt that they needed their own royal death apparition even though there was a tradition (probably no older than the 19th century) that if the ravens at the Tower of London flew away either England would be conquered by her enemies or a member of the Royal family would die.  And a beautiful, beheaded queen is much more appealing than croaking black birds.  More likely this is a piece of journalistic poetic licence. Other, later versions of this piece elaborate on the basic story and add what appear to be quotes from guards at the Tower or describe how the ghost of Mary appeared to Queen Elizabeth I before her death.

However, Mrs Daffodil must point out that Queen Victoria died 22 January 1901.

See this post about the busy after-life of Mary, Queen of Scots.

I’ll be taking a bit of a holiday break and will return early in the new year.

This post originally appeared on Mrs Daffodil Digresses in 2013.