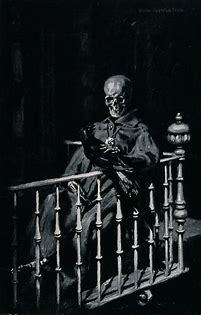 The Ghost of the Evil Raven, Don Rodrigo and the evil raven

On last year’s Day of the Dead, I brought you a very dead, very obedient Spanish nun. Today, we present, not sugar skulls or ofrendas adorned with flowers and lace, but another ghost story from Legends of the City of Mexico to celebrate Dia de Los Muertos.

LEGEND OF THE CALLE DEL PUENTE

AS you know, Senor, in the street that is called the Street of the Bridge of the Raven, there nowadays is no bridge at all; also, the house is gone in which this Don Rodrigo de Ballesteros lived with his raven in the days when he was alive. As to the raven, however, matters are less certain. My grandfather long ago told me that more than once, on nights of storm, he had heard that evil bird uttering his wicked caws at midnight between the thunderclaps; and a most respectable cargador [porter] of my acquaintance has given me his word for it that he has heard those cawings too. Yet if they still go on it must be the raven’s spectre that gives voice to them; because, Senor, while ravens are very long-lived birds, it is improbable that they live and that much time has passed since these matters happened through more than the whole of three hundred years. This Don Rodrigo in his youth, Senor, was a Captain of Arcabuceros in the Royal Army; and, it seems, he fought so well with his cross-bowmen at the battle of San Quintin (what they were fighting about I do not know) that the King of Spain rewarded him when the fighting was all over and there was no more need for his services by making him a royal commissioner here in Mexico: that he might get rich comfortably in his declining years.

It was with the moneys which stuck to his fingers from his collectorship just as the King meant that they should stick, in reward for his good fighting that Don Rodrigo built for himself his fine house in the street that is now called, because of the bridge that once was a part of it, and because of the raven’s doings, the Puente del Cuervo. If that street had another name, earlier, Senor, I do not know what it was.

This Don Rodrigo, as was generally known, was a very wicked person; and therefore he lived in his fine house, along with his raven, in great magnificence eating always from dishes of solid silver, and being served by pages wearing clothes embroidered with gold. But, for all his riches, he himself was clad as though he were a beggar and a very dirty beggar at that. Over his jerkin and breeches he wore a long capellar that wrapped him from his neck to his heels loosely; and this capellar had been worn by him through so many years that it was shabby beyond all respectability, and stained with stains of all colors, and everywhere greasy and soiled. Yet on the front of it, upon his breast, he wore the Cross of Santiago that the King had given him; and wearing that cross, as you know, Senor, made him as much of a caballero as the very best. In various other ways the evil that was in him showed itself. He never went to mass, and he made fun openly of all holy things. The suspicion was entertained by many people that he had intimacies with heretics. Such conduct gives a man a very bad name now; but it gave a man a worse name then and so he was known generally as the Excommunicate, which was the very worst name that anybody could have.

As to the raven, Senor, Don Rodrigo himself named it El Diablo; and that it truly was the devil or, at least, that it was a devil no one ever doubted at all. The conduct of that reprobate bird was most offensive. It would soil the rich furnishings of the house; it would tear with its beak the embroidered coverings of the chairs and the silken tapestries; it would throw down and shatter valuable pieces of glass and porcelain; there was no end to its misdeeds. But when Don Rodrigo stormed at his servants about these wreckings and he was a most violent man, Senor, and used tempestuous language the servants had only to tell him that the raven was the guilty one to pacify him instantly. “If it is the work, of the Devil,” he would say without anger, “it is well done!” and so the matter would pass.

Suddenly, on a day, both Don Rodrigo and the raven disappeared. Their going, in that strange and sudden way, made a great commotion; but there was a greater commotion when the Alcalde being called to look into the matter entered the house to search it and found a very horrible thing. In the room that had been Don Rodrigo’s bedroom, lying dishonored upon the floor, broken and blood-spattered, was the most holy image; and all about it were lying raven feathers, and they also were spattered with blood. Therefore it was known that the raven-devil and Don Rodrigo had beaten the holy image and had drawn blood from it; and that the great devil, the master of both of them, in penalty for their dreadful act of sacrilege, had snatched them suddenly home to him to burn forever in hell. That was the very proper end of them. Never were they seen again either on sea or land.

Naturally, Senor, respectable people declined to live in a house where there had been such shocking doings. Even the people living in the adjoining houses, feeling the disgrace that was on the neighborhood, moved away from them. And so, slowly, as the years went on, all of those houses crumbled to pieces and fell into ruins which were carted away and that is why they no longer are there. But it is generally known, Senor ; that until Don Rodrigos house did in that way go out of existence, Don Rodrigo continued to inhabit it; and that the raven continued to bear him company.

Just a year from the time that the devil had snatched away to hell the two of them and it was at midnight, and a storm was upon the City the neighbors heard between the thunder-claps the clock on the Palace striking its twelve strokes; and then, between the next thunder-claps, they heard the raven caw twelve times. Then it became known that the raven nightly took up its post on the parapet of the bridge that was in that street; and that, when his cawing for midnight was ended, he habitually flew up into the balcony of Don Rodrigo’s house; and that on the balcony he found Don Rodrigo a yellow skeleton, and over the bones of it the dirty old capellar ready and waiting for him. Don Rodrigo’s skeleton would be sitting quite at its ease on the balcony; on the railing of the balcony would be perched the raven; and with his dry-bone fingers making a little clicking sound, like that of castanets Don Rodrigo would stroke gently the back of that intensely wicked bird. All this would show for a moment while the lightning was flashing; then darkness would come, and a crash of thunder; and after the thunder, in the black silence, the little clicking sound of Don Rodrigo ‘s dry-bone fingers stroking the raven’s back gently again would be heard.

And so it all went on, Senor, my grandfather told me, until the house tumbled down with age, and these disagreeable horrors no longer were possible; and it is most reasonably evident since the street got its name because of them that they really must have happened, and that they must have continued for a very long time.

As I have mentioned, Senor, my friend the cargador who is a most respectable and truthful person declares that sometimes on stormy nights he himself has heard the raven’s cawings when the Palace clock has finished its twelve strokes; and from that it would appear that the raven is to be met with in the Puente del Cuervo even now.

Legends of the City of Mexico, collected by Thomas A. Janvier, 1910

The wonderfully lurid illustrations in this book are by Walter Appleton Clark.