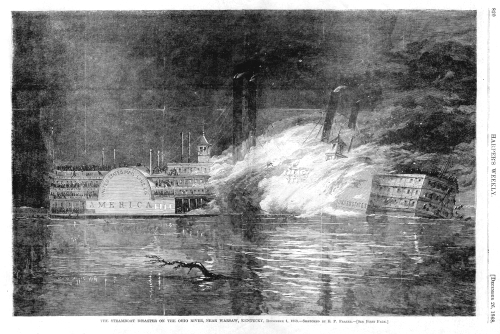 The Ghost With One Hand An illustration of the collision between the steamboats United States and America. From this site, telling the story of the disaster. http://freepages.genealogy.rootsweb.ancestry.com/~wynkoop/webdocs/steambts.htm

Today, on the anniversary of a horrific steamboat disaster, a ghost story for the traditional season of ghostly tales.

The folktale “The Golden Arm,” is a classic ghost story long told at sleepovers and around the campfire. It is paralleled in this ghost story linked with an Ohio River steamship disaster.  Steam packets United States and America collided in the Ohio River December 4, 1868, two miles above Warsaw, Kentucky.  The estimated death toll has ranged from 40 to 170—the passenger lists were destroyed in the ensuing fires.  At the time it was the worst steamboat disaster in the country’s history. There were several wedding parties on board the United States and a number of the victims were women, like the mutilated apparition in the following story.

Who Had Been Drowned in Ohio River

Came Back to Earth

To Reclaim a Lost Hand That Was Severed

At the Time of Death, When Steamboat United States Was Sunk.

Dillsboro, Ind., June 4. From time to time there have been many incidents published relative to the sinking of the large steamboat United States which occurred many years ago in the Ohio River about one mile above Warsaw, Ky., on the Indiana side of the river. Terrible, and even uncanny stories have been told about the wreck. A man of the name of Garret gives the following account of the tragedies:

“It was in the summer of 1881, and the Ohio River was low. My father was working in one of the wrecks near shore for some valuable relics. He was digging in the sand about four feet from the hull, which at that stage of the river was but half buried in the sand and water. He had not dug long when he unearthed something, apparently a lump of tallow. After handling it very carefully and washing the sand off, it proved to be a human hand—that of a young lady, presumably not more than 20 years of age. The member had been severed at the wrist.

“The fingers were slender, the finger nails being pink as a sea shell and perfect as in life. The joints and cords were very plain and even the veins were easily traced. The hand itself was of pearly whiteness, but cold and firm. The hand became my property and for a long time I kept it locked in a walnut box. Some months later a startling phenomenon took place, which for family reasons has thus far been withheld. At the time of the peculiar event my mother was away for a month’s visit and my father and myself were left alone to “batch” it. I retired as usual about 9 o’clock leaving my father in an adjoining room reading. The light from his room showed in my bedroom, lighting up the corner in which my bed stood. About 10 o’clock my father concluded to retire, and as he was preparing to do so happened to look toward me, and to his surprise he saw standing by my bedside a fair young woman in a purple robe. She was leaning over my couch, with the palm of her right hand resting lightly upon my forehead. While my father stood gazing at the apparition it glided behind the door and disappeared. At the time of this strange visitation all the outer doors and windows of the house were securely fastened.

“Shortly after that, at about the same time of night, the apparition again appeared and this time my father crept stealthily toward it. The ghost, spirit, or whatever it may be termed, knelt beside the bed and raised up its arms as if in supplication to me, I being asleep at the time. To his horror my father saw that the right hand of the supplicant was missing, and that blood gleamed at the lacerated place. After a few seconds the phantom arose and disappeared as before.

“The next morning at breakfast my father seemed gloomy and troubled. I was in the same mood, for I had seen in a dream the same sight witnessed by my father. I began to tell him of the dream and the vision. When half through the story my father stopped the recital and with a pale face, asked me if it was not the right hand that was missing. I told him it was, and then he asked me if the hand in the box was a right or a left member. I could not remember, so we unlocked the box to find that it was a right hand.

“‘Then we will bury that ghostly relic immediately,’ said he, and without further ado the interment took place. My father at that little burial in the garden invoked eternal peace of the troubled spirit to whom it had belonged in life and we agreed to say nothing about the incident, fearing people might think us partially demented. I no longer fear such a verdict and have given the facts in the case.

“The apparition never visited us again.”

Assuming that the hand was, in fact, from a victim of the steamship crash, could a severed hand survive thirteen years buried in a sandbar?  The answer is yes, if the hand turned to adipocere, also known as “corpse wax,” a substance produced when a body is buried in a damp area with no oxygen—such as in a river sandbar. I kept waiting for the ghost to demand, “Give me back my hand!”

This is an excerpt from The Ghost Wore Black: Ghastly Tales from the Past.