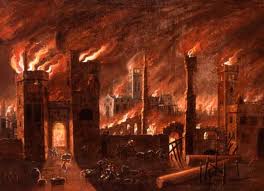 The Little Match Girls: Incendiary Poltergeists Have incendiary poltergeists been at work here? [Well, no, that’s the London fire.]

While writing The Face in the Window: Haunting Ohio Tales, I became fascinated by incendiary poltergeists—fire-starters or fire-spooks, in the vernacular—and included several stories on the subject in that book, including a chapter on a Springfield, Ohio orphan who went into “trances” and was the focal point of a series of mysterious fires at the boarding house where she was employed.

Fire spooks are one of the strangest, most erratic, and most terrifying of paranormal entities. They cause outbreaks of inexplicable fires—sometimes dozens in a single day. Even damp objects combust. The bewildered victims may extinguish one fire, only to find another erupting. I can’t fathom what the mechanism might be, but there are centuries of reports about people with a mysterious talent for starting fires–usually girls or young women.

These fiery mysteries may be related to Spontaneous Human Combustion, where flammable objects near the fire are untouched and witnesses have said that the flames burn a bright, hellish blue. There also seems to be a link to ill-health, fevers, or seizures.

In 1922, an incendiary poltergeist case, known as “The Fire Spook of Caledonia Mills,” captured the attention of the world.  Like so many poltergeist cases, it centered around a young girl, Mary Ellen, the 15-year-old adopted daughter of farmer Alex McDonald of Antigonish County, Nova Scotia, the apparent focus for the mysterious fires that plagued the family. The case, which was covered exhaustively in US and Canadian papers, was investigated by Dr. Walter Prince of the American Institute for Scientific Research. Dr. Prince, who was famous for his work on abnormal psychology, especially the multiple personality case of Doris Fisher in the first decade of the 1900s, concluded that Mary Ellen was responsible for setting fires while in a dissociative state.

“But I am emphatically of the opinion that the girl was not mentally culpable. She is, mentally, exceedingly young for her years [some said she had a mental age of 4], and within the past years has had singular ‘dream states’ from which it was difficult to rouse her. It is very probable that she was the victim of altered states of consciousness…if the views of the late Dr. Hyslop, who amassed considerable evidence in support of them, are correct, this would be a case where a discarnate agency brought about the alteration of personality and performed the acts through the girl.” Philadelphia Inquirer [Philadelphia, PA] 16 March 16 1922:  p. 8

Here is a brief summary of some of Dr. Prince’s reasons for believing Mary Ellen was the fire-bug. You can read his entire report online here.

1)      None of the wall fire damage extended higher on the walls than 5 feet, which was Mary Ellen’s height.

3)      The fires never began in front of witnesses and fires never started in places visible from the kitchen. (Dr. Prince found this especially indicative of Mary Ellen’s guilt. Why would a “ghost” hide while starting a fire?)

5)      Dr. Prince found bottles containing kerosene, turpentine, and separator oil in the kitchen, which could have accounted for some of the effects of the fire spook.

Others scoffed at Dr Price’s ideas and believed that large radio antennae were sparking the fires.

Boston, March 13. Edward J. O’Brien, scientist and author declared today that the ghost of Antigonish was in reality the product of electrical energy….O’Brien said he found that strong wireless currents between the two great radio stations at Wellfleet, Mass., and Glace Bay, N.S., ran through the valley at Caledonia Mills, where stands the home of Alex MacDonald, scene of the eerie events.

“The MacDonalds,” said O’Brien, “will have to move their house out of range of these powerful radio currents if they wish to avoid the ghost-like incidents. If not, the house may be burned down when the atmospheric conditions are just right, as they apparently were when the fires were set around the barn.” …O’Brien predicted that Dr Walter Franklin Prince, New York, director of the American Society for Scientific Research, who has spent the past week in the “Haunted house,” would fail to find any other causes of the phenomena. Winona [MN] Republic-Herald 13 March 1922: p. 1

[My Electrical Engineer spouse commented that “there could be a standing wave that would concentrate the energy,” but added that this would require very unusual conditions.]

The media coverage was extensive and the Antigonish case was so well-known that it was frequently cited in subsequent cases as a kind of shorthand for any incendiary poltergeist incident, just as the notorious Cock Lane ghost of 1762 was often referred to in rapping poltergeist cases. The New York Times for 13 October 1922 reported that Mary Ellen MacDonald had been admitted to the Nova Scotia Hospital for the Insane in Halifax after the police caught her setting fires. She was eventually released, married, and died in her 70s in Ontario, Canada.

The year 1922 was a busy one for fire-spooks. In March of 1922, just after the Antigonish investigation, fires broke out in an Alva, Oklahoma sickroom.

Break Out in All Parts of Room and in Bedding of Invalid Woman.

Alva, Okla., March 13. Blue flames, their origin a mystery, which seem to burst from the air itself, threaten a horrible death to Mrs. Ona Smith, 23, an invalid, who lies paralyzed on a bed in a little cottage here.

The authorities are completely baffled by the outbreaks. Bedside watchers, who are keeping vigil day and night, can only leap to the rescue as the mysterious fires burst out at intervals in the bedding, clothing worn by Mrs. Smith, wall draperies, or any inflammable material in the room….Two mattresses have been reduced to smoldering ruins, a calendar on the wall has been ignited, a shawl worn by the invalid has burst into flames and several other blazes have started in bedding in the last few days….Witnesses say the fires seem to start in the air, blue flames jumping and crackling. New York Times 14 March 1922

A Port Arthur, Texas newspaper ran the same article with the headline “Has Halifax Spook Moved to Oklahoma?”

Flames Burst Out in Residence in Oklahoma

Origin of All Mystery

Norman Okla (United Press) A Guard was today place around the alleged haunted house in which J.L. W. Wagoner and his wife lived here, following twelve mysterious fires in the house in the past two days.

Fires have burst out in all part of the house during all hours of the past two days and nights, according to Wagoner.

Bed clothing has become ignited in rooms where there were no occupants. Clothes closets have been discovered in flames hours after any member of the family was near. Two fires broke out on the roof and to cap the climax, a wet wash rag, hanging in the kitchen, burst into flames. All of the conflagrations were extinguished before serious damage resulted….

This article introduces another theme in incendiary poltergeist literature, an attempt to find some “self-combusting” chemicals to blame. Certainly farmers were familiar with spontaneous combustion—it posed a real threat to crops and buildings—but it seems far-fetched to suggest sophisticated chemical solutions to this particular mystery.

Not so in the Springfield, Ohio fire-spook case from 1890 mentioned in my opening paragraph, where fires broke out in Mrs. McGowen’s boarding house. Three of Mrs. McGowen’s boarders worked in a nearby greenhouse where the owner had made a special study of chemical fertilizers. The usual suggestions about combustible chemicals were made—only in this case, these men actually did have access to fire-starting substances.

The insurance agents of the city have secured the services of chemist J.D. Lisle who will make a thorough examination of the premises in search of any chemical preparation which may have been used to cause combustion. If he fails the spirits will have to bear the blame until some stroke of good fortune vindicates them. Springfield [OH] Republic Times 23 December 1890

The “spirits” to bear the blame refers to another motif in poltergeist accounts, an attempt to find a ghost responsible for the fires. Here is the Springfield Republic Times again, on a possible ghostly culprit:

The fourth outburst occurred at a little after noon and was discovered by Miss Merkly, just as a Republic-Times reporter was leaving the house. In this instance it was a chest of clothing which belonged to a deceased daughter of Mrs. McGowen. The young woman died about four years ago and her clothing was packed away shortly after the funeral since which time it has not been touched. This is the most mysterious of all features yet developed and has done much to arouse a feeling among the superstitiously [inclined that some supernatural] agency is responsible for the phenomenon…Springfield [OH] Republic Times 23 December 1890

There is a maddening ambiguity about poltergeist cases: It’s the girl! No, it’s a ghost! It’s chemicals! No, it’s a haunted house! Of course the ambiguity could be the result of overlap in different types of manifestations: you have a troubled adolescent in a dissociative state who might be attracting malign “earthbound spirits,” who might be drawn to a historically haunted site or feeding off the troubled adolescent’s energy. I do not know how one would easily separate the threads of the tangle.

From the following curious footnote to the Antigonish story, it appears that the farm where Mary Ellen set her fires had a haunted history:

Miss Katherine Pitts of Cleveland, born near the famous haunted farm of Alexander MacDonald in Caledonia Mills, N.S., does not quite agree with Dr. Walter Franklin Prince that the Antigonish firebug spook was human.

“That human spook just took advantage of a situation on the farm which existed there before I was born,” Miss Pitts, who is now 20, said.

“But a haunt or ghost did exist there where I was a little girl, going to school and I and other children witnessed the strange phenomena which I first attributed to the superstitions of the folks who lived in the neighbourhood.

Miss Pitts told of how doors would open and shut mysteriously and on nights when there was no wind or storm on which to blame the manifestation. Tinware and dishes were heard to rattle and that the clanging of chains being dragged across the floor, weird sighs and whistlings were often heard by passers by.

‘On several occasions when I drove by the place with my father, even in broad daylight, our horses would shy at some object we did not see and dash uncontrollably for a mile from the scene,” Miss Pitts said. Lima [OH] News, 16 March 1922: p. 6

So which came first? the haunting or the poltergeist? I can only report on the patterns of historical poltergeists, but have never been able to make up my mind about this burning question.