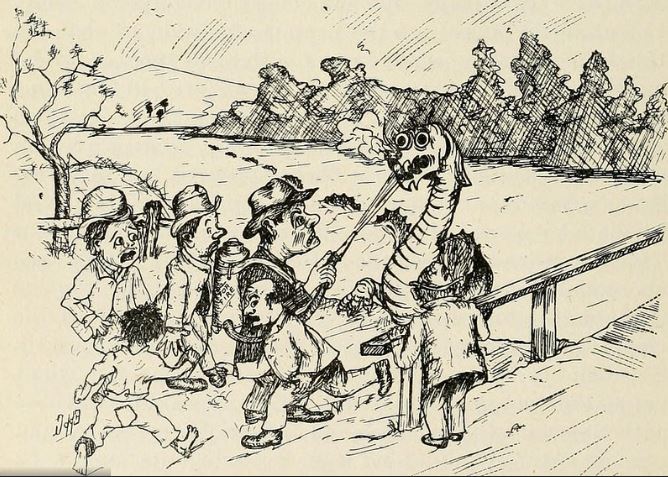 It’s too hot to do much of anything except enjoy a Silly Season sea serpent story–not from the serpent-haunted waters of the North Sea, but from–Kansas.

About this time [1876] there occurred an event that, from a frivolous beginning, created quite an excitement along the river. There appeared in a Missouri paper a flaming article, afterwards copied and illustrated by the New York Police Gazette, regarding a sea serpent which appeared in the river at Scandia. The article was about as follows: “On Sunday morning, as Mr. George Lembke, the toll collector of the bridge, approached the river, he saw a huge monster in the stream and uttered a Swedish cry of astonishment which brought the whole population running to the bank. The appearance of these persons seemed to astonish and enrage the creature, and rearing itself upon its hind legs, it reached its long neck over the bank, and was almost in the act of seizing an inhabitant; just at this moment Mr. Birchfield, who had rushed promptly to the scene with his fire extinguisher strapped upon his back, aimed the nozzle of his machine at the open mouth of the animal and discharged such a stream of chemicals down the creature’s throat as to cause it to fall back into the water and depart rapidly down the river. Raising its huge, cut-water fin, it parted the waves, throwing the water with great violence against either bank and soon disappeared around the bend.”

Now what concerned us was its departing down the river. The Republican river had its rise in the wild and unknown regions of the west and we did not know what kind of creatures had their being there. One settler, who farmed on the east side but lived on the west, refused to cross the river to tend his corn and let it go to weeds. Another man. a Buffalo hunter and Indian killer, patrolled the river bank for days in the hope of adding fresh laurels to an already undying fame.

The cause of the sea serpent scare was very simple. It seems that Mr. Lembke had set a hook in the river for the enticement of such wandering catfish as might be passing, to which some person had fastened an enormous bull snake, they being very plenty and of great size in those days.

Mr. Birchfield, who was a very pleasant gentleman, although a little odd, had procured a fire extinguisher, which he was fond of showing to his friends at the store, which stood on the corner where Morey’s bank now is. A drummer, who saw Mr. Lembke pull the snake from the river and to whom was shown the fire extinguisher, being of romantic disposition and vivid imagination, wrote the thrilling tale which had created so much uneasiness.

A History of Republic County, Kansas: Embracing a Full and Complete Account of all the Leading Events in Its History, Isaac O. Savage, 1901

Damn. Each time we get our hopes up, they are dashed. A sea serpent fought off with a fire extinguisher would have been something to write home about.

For another silly-season monster, see “The Hideous Ice Worm.”