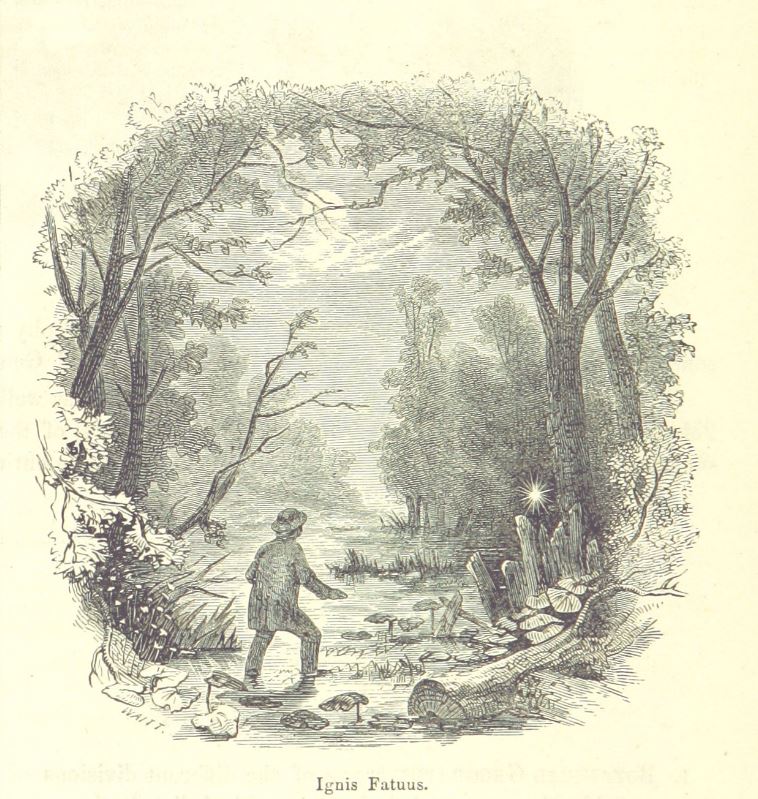 The Rolling Bogey of Pogue’s Run A boggart or will-o-the-wisp leads a man astray.

A short time ago I wrote about a hollow tree ghost in a place called Pogue’s Run, in Indianapolis, Indiana. I was not surprised to find that there was yet another supernatural creature in the vicinity—one that curiously suggested the tales of rolling wool boggarts unspooled by Dr Beachcombing.

Creates Much Excitement Near Campbell and Highland Ave.

John Miller and Family and Others Describe it – Two Patrolmen Watch for the Spook.

Local ghost stories are going the rounds in the neighborhood of Campbell street and Highland avenue. At the point where these two streets ought to come together Pogue’s run wends its way in a southwesterly direction and cuts off the nearer approach of the first-named street. Spanning the run at Highland avenue is a well-constructed bridge, and in the vicinity of the bridge is where a ghost has lately made its appearance.

The bridge is about as lonesome a place as could be found, considering that it is located in a populous section of the city. It is about two blocks east of the Big Four and Lake Erie tracks, and about as far south of St. Clair street. To the east of the bridge stretches an expanse of vacant ground. This is owned by the Big Four Company. It is ground which came under the ownership of this company through the old Bee-line, which had its shops and round-house there. Further east is the arsenal grounds. The immediate vicinity of the bridge is not thickly settled, and short cuts across vacant lots and through alleys are as frequently used by pedestrians as the unimproved highways.
it is an ideal spot for a ghost, and according to the stories told by the natives, a blown-in-the-bottle one is making things lively for people who happen to pass that way at night. Joh Miller and family, consisting of a wife, two small boys and a boarder, live in a tumble-down house on the bank of the run just west of the bridge. All the members of the family have seen the ghost, and their accounts of their experience are weird enough to set the bones in a superstitious person rattling. Mr. Miller was spokesman for the family when the Journal was given the following (reported verbatim) last night:

“I don’t know what to think of it” he said. “I have lived in this city goin’ on to twenty-two years, and before that I was all over Shelby county more or less, and I ain’t never seen anything like it. The first time I seen it was when my woman called me out into the yard one morning efore day. We both seen something white. It looked like a man, only it was too big. It came across the bridge and right up to the corner of my lot and then it just appeared to melt in the air. I got a better look at it at another time. I was crossing the bridge, just about half-after 9, when I seen the thing come toward me. It seemed to raise right up out of the ground, and to get bigger and bigger when it came closer. There was a fellow with me, and he hollowed at me, and the thing just disappeared. It looked then like it was shaped like a man.

FAT AS IT IS HIGH.

Since then the people who have seen it say it is not so large. It seems to be getting into a bunch, and it is about as fat as it is high. A couple of young men saw it the other night as they were crossing the bridge. It rose up right before them, and they stood still while it approached them. They say they were not scared, and wanted to learn what sort of a thing it was. They tried to see how it moved, but could not see that it walked, and are sure it made no noise. When the thing got alongside of them one of them stuck at it with a big hickory stick, and he swears the stick went right through it, and the thing went up into the air.”

Mr. Miller was asked what he thought the thing could be, and said: “Well, some says it is the ghost of a colored man who was murdered five or six years ago in the second house above the bridge. I don’t see how this can be for the ghost is sure white. Others say the ghost ain’t no ghost at all, but that somebody is trying to scare the people out of the neighborhood so as to make property low. I don’t believe this. If it is some man he is an awful good acrobat, and I believe he could make more money in the show business than he could playing ghost.”

Mr. Miller was asked what time the ghost generally appeared. “Well, it ain’t no use to look for it now while the moon is shining. I never did see a ghost in moonlight, and I am told that they are never out then. The light seems to hurt their eyes.”

There was quite a crowd last night waiting for the ghost to appear, but they were disappointed if they were really anxious to see It, for it was not seen. For several nights the people of the neighborhood have been trying to solve the mystery, but it is said no one has been able to see the ghost for three nights. It is this length of time since the presence of the ghost became generally known about the neighborhood. Before that it was no trick at all to get a sight of it.

Herman Schwoer, a teamster, has been in the habit of crossing the bridge every night on his way home. Last night he said, in Euskaup’s saloon, on Dorman street, to a crowd of people who were discussing the affair, that he had made his last trip over the bridge at night.

“I saw the thing,” he said, “and I don’t want to see it again. I can’t say that I believe in ghosts, but I am certain that I saw something that I could not explain and I would rather not see it again. It was a round, white object that seemed to walk or roll without noise and to appear and disappear at will. It seemed to walk right off the bridge.”

A number of boys claim to have seen the apparition several times along the bank of Pogue’s run. Its form seems to differ, sometimes being tall and slender and other times being short and thick. Two women, Mrs. Simpson and her daughter, who live on Highland avenue near the bridge, saw the apparition Sunday night and were badly frightened.

The affair has caused a great deal of excitement in the neighborhood. For the last three nights Patrolmen Bray and Schrader, who run the district, have been trying to get a glimpse of the ghost. It is their avowed intention to capture whatever it is, if it is capturable.

Mr. Miller states several original ideas about ghosts: a black man could not be a white ghost and ghosts cannot appear in the moonlight.  Were these his own or local folklore?

Whenever there is a ghost reported near a creek or on a bridge, my first thought is “miasma.”  I could be wrong, of course, and the apparition could just be one of those Things that haunt liminal spaces. Let’s look at the descriptions:

“getting into a bunch”

“could not see that it walked”

“a round white object”

“seemed to walk or roll without noise”

Quite a variety there, which suggests observer bias or a shape-shifting boggart. I vote for the latter. While the United States has an abundance of Spook Lights, silent, rolling bogies are rare in this country (although I chronicled a rolling shot visitant at Murfreesboro, Tennessee, during the Civil War.) and I’d like to see them encouraged. I was struck by similarities in this Rolling Pooka story from Dublin, Ireland, about a similar white rolling object reported in The Fairy Census.

Pogue’s Run was named for early settler George Pogue, a blacksmith, who went in search of some missing horses one April day in 1821 and was never seen again.  If we wish to be utterly fanciful, we might ask: was Pogue [cue the dramatic chord] led to his doom by a local boggart? Surely as a blacksmith, he would have known to carry prophylactic iron…

Today, you will seek for the bridge of the rolling bogey in vain. Much of Pogue’s Run, which had become an open sewer, was paved over in 1914 for health and safety reasons.  It is a nice point whether a ghost panic, over a large misty man or a silent rolling object, constitutes a public health emergency.

Other US rolling bogeys, especially shape-shifting ones? Roll over to chriswoodyard8 AT gmail.com