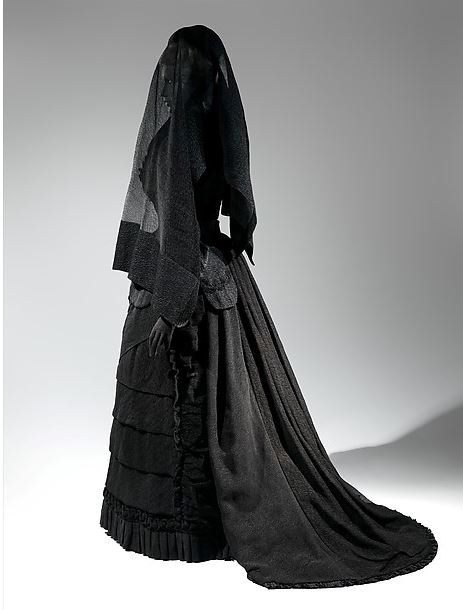 A few days ago I wrote about a Woman in Black haunting the town of Massillon in 1895. The town was in a fever of excitement and a young man, ill-advisedly impersonating the ghost, was wounded when shot by a friend. I was very excited to find this story while working on The Face in the Window: Haunting Ohio Tales, which includes a chapter, “Death in Black Silk,” on ghostly Women in Black. As a story it was quite satisfying, with multiple witnesses, detailed descriptions, and varying theories about what the creature might be.

Then I made the mistake of looking farther.

Normally Women in Black Ghost Panics just end with a whimper, fading away with a one-line squib about “the Woman in Black has been seen no more,” but in a surprise ending, the Massillon Woman in Black was revealed as a genuine flesh-and-blood creature.

THE “GHOST” AND WHAT SHE WAS DOING

THE REWARD OFFERED BY “THE INDEPENDENT” BRINGS TO LIGHT

THE TRUE STORY OF THE PROSPECT STREET APPARITION

The shedding of blood and general excitement concerning the Prospect Street “woman in black” caused The Independent to offer a small cash reward on Monday, for a genuine explanation of the alleged mystery. Although many investigators were thoroughly convinced that the creature was a ghost, it was thought possible that some other conclusion might be reached, and so it has been proved. The reward goes to Mr. B.J. Graybill, who furnishes the sub-joined account, which has been verified by Independent reporters in every particular.

“The mysterious woman in black who has lately appeared to several persons in the vicinity of Prospect and Plum Streets to be a ghost or spectre, is none other than a respectable lady from Canton, Mrs. Libold, whose mission here is to sell Catholic prayer books. Her anxiety to liquidate a debt upon property she owns at Wooster, O., and the peculiar fashion in which she attires herself is the cause of her being chased until almost exhausted, and the weird name of ghost applied to her.

“During her visits here, her interests at the store are looked after by her daughter, who is a school teacher. She generally returns home on the last car, but sometimes her work detains her so long that she misses it and is compelled to remain here over night. A black dress, small black hat, small face and head and a black veil together make her appearance somewhat grotesque, if not ghostly, especially after dark. She has discontinued her visits here, and I hope this will set at rest the minds of those who have mistaken her for a phantom.”

I was intrigued by the reports which all emphasized the ghost’s tiny head. The fashions of 1895 featured huge puffed sleeves as well as small hats worn on smoothly dressed hair. The contrast between enormous shoulders and a wizened face with a veiled hat worn on upswept hair might have been enough (particularly in the dusk) to give the impression of an abnormally small face.  If Mrs. Libold was wearing outmoded fashions—perhaps from the 1880s—her hair would also have been worn close to the head under a small hat.

Canton, Sept. 14. The mysterious “woman in black” proves to be Mrs. Libold, of Canton, who lives opposite the Yohe House. Frequently during the summer Mrs. Libold has visited friends in Massillon, and not being aware that she presented a frightful appearance to the superstitious she has crossed Prospect and Plum Streets on her way to see them. On one occasion, no doubt the night that Peter Ertle and the young lady with whom he was talking first reported the ghostly spectre in black, Mrs. Libold says she was followed quite a distance by a young couple after she had crossed Prospect Street.

“I remember the instance well,” said Mrs. Libold, “for I was rather frightened myself. I had called on friends in Plum Street and remained there later than I should, for I wished to spend a few moments with acquaintances in Center Street. I started for the latter place and walked rather fast. When I reached Prospect Street, instead of turning up to North I walked straight up Plum Street and then through the alley in the rear of the Steese residence to North. I then noticed that I was being followed by the young man and lady and walked faster. When I reached Hamel’s they had retired and I returned on North Street. The two walked past me and stared at me so closely that I thought they must have taken me for someone else. I then took the 10:30 car for Canton.”

When informed that she had been taken for the ghost and had badly frightened several persons she was astonished but greatly amused. The Massillon [OH] Independent 19 September 1895: p. 7

Well. I was about as deflated as a historic ghost story hunter could be by this anti-climax. (I confess that I had one brief moment of temptation to suppress the evidence.) Still, it was a lesson for me: the story isn’t over until you’ve seen all the possible sources. The truth is out there—in the following Saturday’s evening edition.

Of course completely tracing a story is not always possible: newspaper archives lack that one vital issue containing the end of the story, or, in real life, there was no actual resolution. In addition, some editors seemed to drop stories for various reasons. Poltergeist cases, in particular, have a humiliation factor (prominent witnesses fooled by teenaged girl!) that can lead to an abrupt end to newspaper coverage or to improbable or patently absurd “explanations” (like “strings” being employed to move an 800-pound stove in an 1877 poltergeist case in Belmont County) just to put an end to an embarrassingly inexplicable sensation.

There is another reason for looking further, particularly at sources outside your target area. If you find a tale widely disseminated (like the luckless David Mergenthaler who was killed by a meteor at multiple sites from New Mexico to Ohio.) you know that you’re probably dealing with a journalistic hoax.

None of those applied in this case: the newspapers seemed anxious to publish a comprehensive history of the Woman in Black of Massillon panic of 1895. And I was lucky enough to find all the stories. It was a sobering lesson for people like me who are always looking for the next thrilling tale and one which I took to heart while researching a Spook Light Sensation in western Ohio, which drew thousands of witnesses and did not turn out to be a respectable lady from Canton.

But that is for another day.

For chilling stories of unexplained Women in Black, see The Ghost Wore Black: Ghastly Tales from the Past. The Ghost Wore Black, which covers fortean stories from around the United States, is available in book form from this link, at your local Barnes & Noble (ask your other bookstores to order it), and from Amazon and other online retailers. It is also available for Kindle. If you’d like to check out the table of contents–there are reports of many different types of ghosts and paranormal entities in the book–see this introduction to the book. You’ll find a general index here and a state index here.