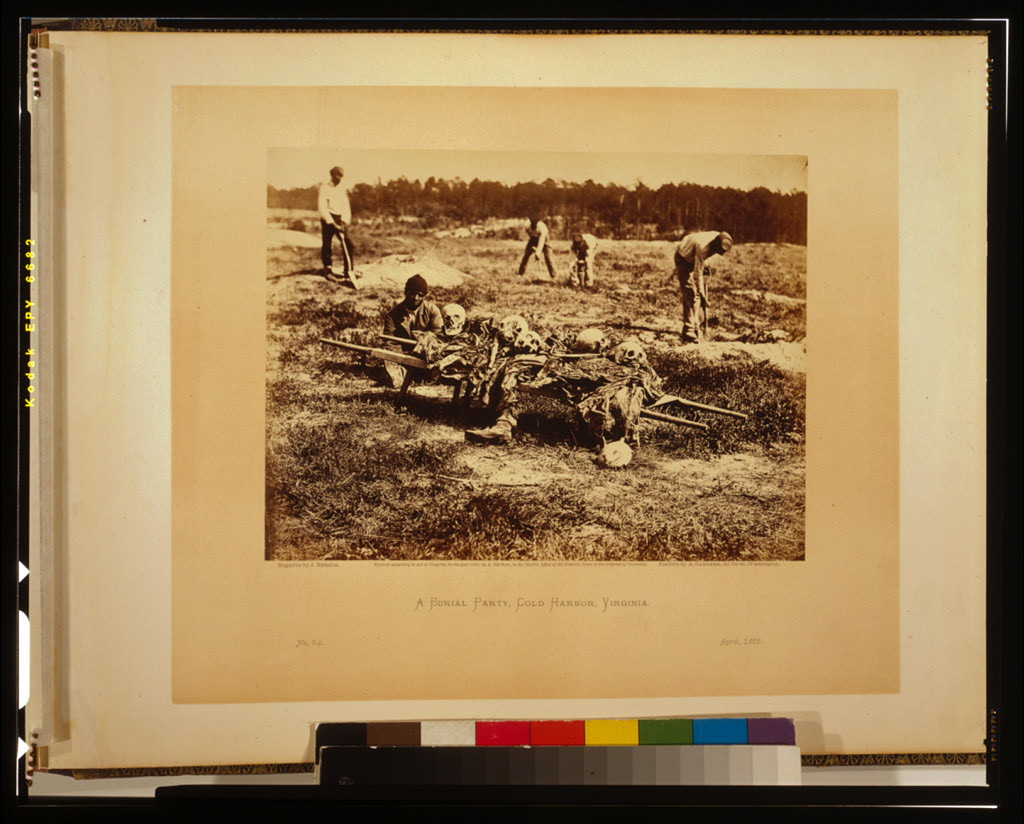 Twenty Acres of Skulls A burial party at Cold Harbor with a stretcher full of skulls and bones. http://www.loc.gov/pictures/resource/cph.3g10205/

Nothing fortean today, just a remembrance of the horrors of war for this Memorial Day weekend.

Malvern Hill, One Year After the Battle, Was a Field of Skulls.

“I think the ghastliest sight I ever saw,” said Sheriff Barnes yesterday, “was during the late war on the field of Malvern Hill. I was in the battle, and a more terrible battle I never witnessed. But that is not the exact time to which I refer. About a year after the battle was fought my regiment was ordered out into the neighborhood of the same old field. We went over the very same ground, and there in the open field,  exposed to the torrid sun, were bleaching the bones of our comrades who fell in that awful engagement. It was a sight I shall never forget. On every side lay a waste of skulls—skulls of almost every shape and size—a modern Golgotha. We could not identify them, however, and could only gaze with a feeling of sorrow on the aggregate pile of human heads that had once been full of life and feeling. After the deeper emotions excited by the spectacle had worn away, I thought of the infinite variety of shapes that were presented by the heap. There were no two of the same shape or size, and it was rather a matter of course, though melancholy, interest, to inspect the different skulls as they lay crumbling in the sultry atmosphere of that August day. It was, after all, a mournful sight, and one that was full of abiding pathos, to think that all that was left of the gallant men that figured in the fight of that eventful day was a lot of skulls that were now beyond recognition, and that would soon be a part of the dust on which we were standing. Such is a picture of that awful sight, and only one of the many horrid scenes in the portraiture of war.” Atlanta Constitution. Plain Dealer [Cleveland, OH] 25 March 1893: p. 12

Abiding pathos did not long abide in the face of economic development:

A correspondent thus writes of the Confederate burial place at Malvern Hill, Virginia:

“The cemetery keeper offered to act as our guide, and, after showing us the fort and its adjacent rifle-pits, he escorted us to a large field on the northwest side of the fort, and there a most terrible scene presented itself. Thousands of Confederate soldiers, who had fallen in their desperate and persistent attempt to take Fort Harrison, were buried by the Confederates where they fell. Twenty acres or more have just been plowed up by the owner of the field, and the plowshare turned to the surface all these skeletons. Over the whole tract the bones are strewn in profusion, and grinning skulls stare the visitor in the face on every hand.

“When the farmer was questioned, he said the land was now the richest piece he had, and in justification of his sacrilegious act, stated that ‘he didn’t put ‘em there, nohow.’ We learned afterward that the bones had been taken away by the cartload and sold to fertilizing mills in Richmond. Two humane men, too poor to do anything else, came one day we were there, and attempted to burn some of the bones to prevent the wretches from carting them off. But a long job they will have if they attempt to burn them all.”  Cincinnati [OH] Commercial Tribune 3 May 1869: p. 6

For background on The Battle of Malvern Hill.  At this, the last battle in the Peninsula Campaign, the Confederates lost over 5,000 men without gaining any military advantage whatsoever.

As General D.H. Hill said after the Battle of Malvern Hill, “It wasn’t war, it was murder.”