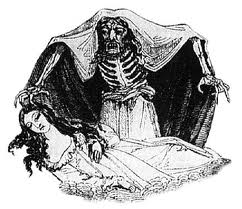 I’ve been reviewing my bulging files of entranced, incorrupt, and seeming-to-sleep corpses in preparation for the final assault on the upcoming The Victorian Book of the Dead. The concept of “suspended animation” seemed to fascinate the journalists of the nineteenth century, possibly because it was so bound up with premature burial. There are multiple accounts of persons who seemed to die, but whose bodies did not decay–one young woman’s body lay unburied for 21 days with no signs of decomposition. The dilemma for the nineteenth-century mourner watching at the bier of a loved one was that there were plenty of stories of corpses reviving after “being in a trance” for hours, days, or even weeks.  There are truly harrowing first-hand accounts by some of these individuals, who, like the gentleman in the story below, could hear everything going around them, but were helpless to act, even when about to be buried alive.  Even if exaggerated, such stories made the bereaved vulnerable to anyone offering a gleam of hope.

[From the St. Louis Democrat.]

A good deal of excitement has been created by the circumstances attending the death of Mr. Joseph F. Keitkamp, an old and wealthy citizen of German birth, and the belief of his family that he was not dead, but in a state of suspended animation.

Two or three weeks before his death Mr. Keitkamp had a singular dream, which he related to his daughter Josephine. He said that he dreamed that he became sick, and lost the power of speech; that he was believed to be dead and placed in a coffin for burial; that he knew all that was going on, but was unable to speak or move; that he was taken to the church, and the burial services of the Catholic Church read over him in the presence of a large concourse of people; that he heard his daughter weeping, and, by a powerful effort he kicked the end of a coffin off, and, bursting the lid, arose to his feet. All the people ran out in terror, except the driver of a carriage, who remained and assisted him.

On Christmas eve Mr. Keitkamp had one of his fingers paralyzed; then his tongue, and finally his whole body. He was put to bed and a physician sent for, but all his remedies failed to produce any effect, and on the following Monday night the old man died. His family had his death announced in the newspapers, with a notice that the funeral would take place on Wednesday. The features and complexion appeared as natural as in life, the cheeks retaining their healthy hue and the skin being soft and moist. Remembering the dream related to Josephine, and thinking it might possibly be realized, Mrs. Keitkamp had the funeral postponed, and watched the body for the return of life. On Thursday and yesterday a large number of people visited the house to look at the corpse. It retained its fresh appearance, and no signs of decomposition were visible. Yesterday morning several physicians were called in, and they, after making a careful examination, pronounced the death as a reality and restoration to life impossibility.

Yesterday, a gentleman of our acquaintance, with a friend, visited the house to look at the body. He found two or three ladies in the room, apparently friends of the deceased, and standing over the corpse were two strange-looking beings—one a man, the other a woman. The man was dressed in a long black robe, like that worn by priests, and his countenance had a strange, unearthly appearance. The woman was dressed in a costume very much like the street dress of the eccentric Dr. Mary Walker [a man’s suit or, perhaps, bloomers.] The two vampire-looking creatures stood gazing intently upon the face of the dead, with glaring eyeballs and features that twitched with occasional convulsions. Suddenly the man turned to our friend and said:

“Do you want to see a miracle?”

The gentleman intimated that he had no objection.

The black robed man then seized one of the hands of the dead man, and laying it in his palm, struck it repeatedly with the fingers of the other hand, crying in a deep, sepulchral voice: “I command you to rise from the dead, in the name of Jesus Christ of Nazareth!” The woman, at the same time, stooped over the corpse, and, placing her hand under the neck, raised the head upon her bosom. The man repeated:

“In the name of Jesus Christ of Nazareth, I command you to rise!”

Notwithstanding the conjurations of the strange pair, the body of the dead man did not stir, but remained cold and lifeless as before.

One of the ladies who was watching in the room where the candles were burning in front of crucifixes, went down stairs, and in a moment a burly German, a barkeeper of the deceased, came into the room. He walked up to the conjurer and struck him a heavy blow on the side of the head, causing him to drop the hand of the deceased, and lift his own hands in astonishment. The blow was repeated and several vigorous kicks were added, which greatly accelerated the motions of the man, for he made his way down the stairs at a very rapid gait. While this was going on, one of the ladies pitched into the bloomer with almost equal violence. She seized a mirror and belaboured the head of the witch, and tumbled her down stairs after her companion.

The supposition is that the miracle-working visitors were a certain spiritual doctor and his wife, who came to the city recently. And may be imposing upon the credulity of the public by pretending to perform all manner of cures and to work miracles. They pronounced maledictions upon the city , and prophesied terrible mourning and lamentation.

I found several points of interest about this story. First, vampire-looking creatures? Why “vampire?” Nothing about the pair initially suggests that they are blood-suckers or even societal leeches. And what did a vampire look like in the imagination of the 1870s reader? Certainly tales of Eastern European vampires were known in the United States, but they described corpses with “fresh and ruddy” complexions. (Not unlike the dead Keitkamp.) Varney the Vampire with its lurid illustration of a skeletal creature on the cover, was published in England in the mid-1850s. Did it get enough circulation in the United States to influence a cultural vision of vampires?

Second, were the uncanny pair really Spiritualists or something on the order of Pow-wow doctors? Spiritualism and reform dress—the lady’s masculine attire–were often linked in the minds of those unsympathetic to either cause. The general public also associated Spiritualism with insanity (glaring eyes and facial tics) or religious mania. Even if the couple were not Spiritualists, they were being tarred with the same dark brush, in addition to being called a “conjuror” and a “witch.” I am not sure if there is any special significance to the male “vampire’s” hand-slapping ritual; it’s nothing I’ve encountered in spiritualist literature, although spirit hands sometimes playfully slap at séance attendees.

Third, why did Mr. Keitkamp’s body show no signs of decomposition? Since he died at Christmas, possibly the cold weather helped slow down the natural processes, but there are many similar accounts documented during hotter weather. Do these entranced corpses who do not decompose then become “incorruptibles” even when buried?

I once had a mortician tell me that nowadays decomposition is delayed by about three days due to the preservatives in our modern foods. Do certain diseases predispose one to incorruption or do some corpses have the right genes or intestinal fauna so as not to decay at all? Would professional movers of graves say that the phenomenon is common or rare?

If you know of any studies on the subject, lay out your arguments on a cooling board and send to Chriswoodyard8 AT gmail.com.