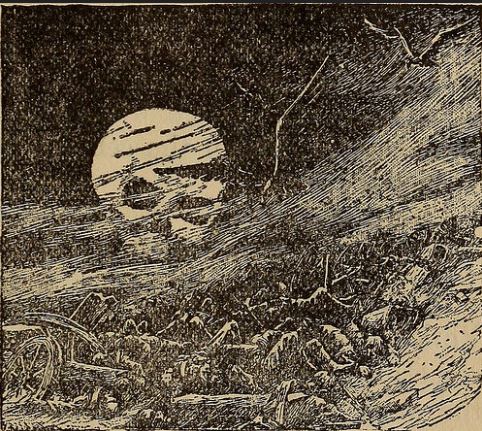 Weird Tales from the Trenches of the Great War Skull moon over the trenches, 1915.

I’ve been a bit fixated on the Great War this week of Remembrance Day/Veteran’s Day/Armistice Day. A couple of days ago, we looked at a slide-show explanation for visions in the sky.  This article also offers earthly explanations. While it was probably newspaper (and perhaps military) policy to discount “strange visions” as hallucinations, one has to wonder….

WAR GHOSTS AT THE FRONT SOLDIERS TELL OF MANY STRANGE VISIONS THEY HAVE SEEN.

Although Hallucinations Come From Utter Exhaustion, Men Believe They Are True

Often an Aid in Fighting.

When a man’s eyes are aching from lack of sleep, when he must tighten his belt because rations are overdue, or exhausted, and when his nerves are subjected to such strain as only war can subject a man’s nerves to, you may say that he is in a fit condition to “see things,” as we vaguely term the supernatural.

Sitting round a cozy fire, munching toast and drinking tea, the blue clad heroes back in Blighty began to talk about the ghosts of the war zone, and there wasn’t a Tommy among them who scoffed, although many had explanations for these things.

Jock’s tale was of a moonlit evening in France when he was on sentry go outside the barn where his companions awaited their summons to the firing line. Jock declared he wasn’t sleepy, and he could give no reason for what he saw and heard.

His ghosts were a brace of dun-colored bloodhounds, coupled together by a short steel chain. And as they galloped past him they gave tongue, clear as a bell.

“First I’d heard one faint note in the distance,” said Jock, “and the deep, mournful bay had caused me to grip my rifle and keep alert. In fact, I’d been searching for a hound, as far as my eyes could search the flat, treeless, moonlit countryside. Then, all at once, there they were before my eyes, and just as suddenly they were gone, with the sound of their baying in my ears.”

The Scotsman said he’d told his tale to many, and that others had seen the hounds. But whenever they were seen something big had always happened on the battle front.

Many a man who fought at Verdun, in those days when it seemed as if the Germans must break through the French defense, has a tale to relate of the old warrior, clad in the equipment of 1870, with long white beard and flowing hair, rosy cheeks and laughing eyes, who showed himself to weary troops and wounded men times without number. This ghost seems to have been very much in evidence during the earlier part of the war. In nearly every instance victory followed his appearance.

Sometimes it was to marching troops wearied to the last point of endurance that he showed himself. Sometimes he led the charge to German trenches. Sometimes he bent over the dying with his water bottle, and gave the draught that saved life.

Just for a second would his athletic old figure be seen, and then a blank. But that there was a Verdun ghost to help their cause was faithfully believed in by the fighting men. Some of them swore that they had seen the old fellow trip up more than one German, and knock his weapon out of his hand.

Another hospital boy, who had been through the campaign in Southwest Africa, before he came to do his bit in France, had plenty to say on the subject of optical atmospheric illusions. He told queer tales of mirage in the Kalahari Desert. “And, besides that, lots of us suffered from hallucinations,” he said.

There was a tale of a long ride in column of sections one moonlit night, when he and his half section both simultaneously reined up their horses to avoid the left flank man of the section in front of them, who had dropped from his horse.

Both men thought the fellow had fallen asleep, tired with the long, long trek. And both rubbed their eyes in amazement, the next second, because there was no man in the sand, but he was riding along a few paces in front of them, and had never fallen.

“A man’s eyes play him tricks when he’s tired out,” remarked another, who had listened quietly. Then he, too, told his tale of when he was out in the Dardanelles.

“I was on outpost duty with my pal Robinson,” he began, “when an enormous shell came along and blew him into little bits before my eyes. I was about fifty yards away, and stood rooted to the spot with the ghastliness of it all. When something happened that scared me more. Head, arms and legs began moving, and they made for poor Robinson’s trunk. A few seconds later there was a complete corpse lying there, just as if he had been knocked out by the shock of the explosion.

“It’s the truth I’m telling you,” he finished. And he honestly believed that it was.

Analysing these stories rationally, the bloodhounds might have been real dogs run amok in the chaos of civilian bombardment. Jock’s story is ambiguous about whether the creatures actually disappeared in front of his eyes or just ran onward, out of sight. The 1870 Veteran is an interesting, if predictable character. As a veteran of the Franco-Prussian War, he would naturally be interested in seeing the Germans defeated. But how did British soldiers know what a veteran of that conflict should look like? He, too, could have been a flesh-and-blood Samaritan of the battlefield. As for the man falling from his horse, I previously told a story about a phantom cavalry troop (at the end of this post), attributed to exhaustion and eye-strain.

But I have to say, the “hallucination” of seeing shell-severed limbs writhing back to their mutilated trunk will stick with me….

A couple of other ghost stories from the Great War can be found here. Others? chriswoodyard8 AT gmail.com

Ron Roffel wrote in with this excellent observation.   “I just read the above article courtesy of a link via Beachcombing’s Bizarre History blog and would like to comment on the story about the hounds.

What the Scot soldier Jock may have seen was a vision of the Hounds of Arawn. According to Welsh legends, they accompany soldiers on the battlefield.

Its appropriate that a man of Celtic ancestry would experience such a vision.”