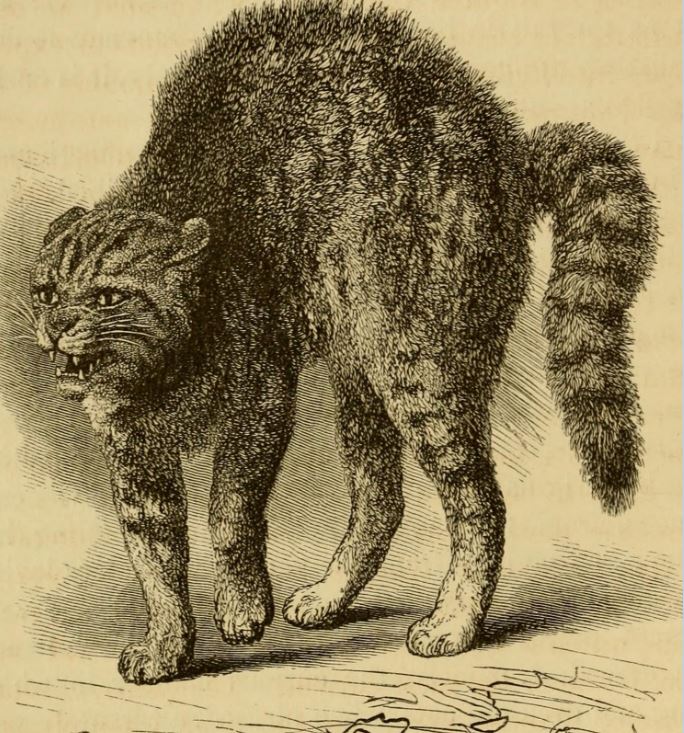 In 1875 the Rev. J. G. Wood published a little book called Man and Beast, Here and Hereafter. Wood was a “parson-naturalist,” who popularized the study of the animal world in his books and lectures. Most of Man and Beast consists of anecdotes about such concepts as the language of animals, as well as memory, generosity, humor, jealousy, conscience, and friendship in the animal kingdom. While it seems to me to unduly anthropomorphize our furred and feathered friends, it does attempt to point out their individuality and emotions, making a case for animal rights. In final chapter of the book, Wood goes a step further, and comes to a most unorthodox conclusion for a Church of England clergyman. Hint: On the title page of Man and Beast is an epigram from James Hogg, shepherd and poet, which reads “I canna but believe that dowgs hae sowls.”

He also suggests that animals can see spirits, citing the precedent of Balaam’s ass in the Old Testament [Numbers 22: 22-33] and sharing a chilling tale about what a cat saw:

There are, as we know, many persons who can not believe that, as they put it, the living should be able to see the dead. Neither do I believe it. But as the spirit lives, though the material body no longer inclose it, surely there can be no difficulty in believing that the living spirit within an earthly body may see a living spirit which has escaped from its material garment. We do not doubt that after the death of the body the spirit will live and see other spirits similarly freed from earth, and it is no very great matter that the living should see the living, though one be still enshrined in its earthly tabernacle, and the other released from it.

This being granted—and it is not very much to grant—it necessarily follows that if the lower animals possess spirit, they may be capable of spiritual as well as material vision. That they do possess this power, and that it can be exercised, is shown by the story of Balaam. There we find it definitely stated, not only that the ass saw the angel, but that she saw him long before her master did. Now the angel, being a spiritual being, could only be seen with the spiritual eye; and it therefore follows that, unless the story be completely false, the animal possessed a spirit, and saw with the eye of that spirit.

I should think that none who believe in the truth of the Holy Scriptures (and I again remind the reader that this book is only intended for those who do so), could doubt that here is a case which proves that the spirit of the ass was capable of seeing and fearing the spiritual angel. And if that be granted, I do not see how any one can doubt that the spirit which saw the angel partook of his immortality, just as her outward eye, which saw material objects, partook of their mortality. Shortly afterward the eyes of the prophet were opened, and he also saw the angel; but it must be remembered that the eyes of the beast had been opened first, and that she, her master, and the angel met for the time in the same spiritual plane.

I have for a long time had in my possession a letter from a lady, in which she narrates a personal adventure which has a singularly close resemblance to the Scriptural story of Balaam. It had been told me immediately after I threw out my “feeler” in the “Common Objects of the Country.” As I had at that time the intention of vindicating the immortality of the lower animals, I requested the narrator to write it, so that I might possess the statement authenticated in her own handwriting.

At the time of the occurrence, the lady and her mother were living in an old country chateau in France.

“It was during the winter of 18— that one evening I happened to be sitting by the side of a cheerful fire in my bedroom, busily engaged in caressing a favorite cat—the illustrious Lady Catharine, now, alas! no more. She lay in a pensive attitude and a winking state of drowsiness in my lap.

“Although my room might have been without candles, it was perfectly illuminated by the light of the fire. There were two doors—one behind me, leading into an apartment which had been locked for the winter, and another on the opposite side of the room, which communicated with the passage.

“Mamma had not left me many minutes, and the high-backed, old-fashioned arm-chair, which she had occupied, remained vacant at the opposite corner of the fire-place. Puss, who lay with her head on my arm, became more and more sleepy, and I pondered on the propriety of preparing for bed.

“Of a sudden I became aware that something had affected my pet’s equanimity. The purring ceased, and she exhibited rapidly increasing symptoms of uneasiness. I bent down, and endeavored to coax her into quietness; but she instantly struggled to her feet in my lap, and, spitting vehemently, with back arched and tail swollen, she assumed a mingled attitude of terror and defiance.

“The change in her position obliged me to raise my head; and on looking up, to my inexpressible horror, I then perceived that a little, hideous, wrinkled old hag occupied mamma’s chair. Her hands were rested on her knees, and her body was stooped forward so as to bring her face in close proximity with mine. Her eyes, piercingly fierce and shining with an overpowering lustre, were steadfastly fixed on me. It was as if a fiend were glaring at me through them. Her dress and general appearance denoted her to belong to the French bourgeoisie; but those eyes, so wonderfully large, and in their expression so intensely wicked, entirely absorbed my senses, and precluded any attention to detail. I should have screamed, but my breath was gone while that terrible gaze so horribly fascinated me: I could neither withdraw my eyes nor rise from my seat.

“I had meanwhile been trying to keep a tight hold on the cat, but she seemed resolutely determined not to remain in such ugly neighborhood, and, after some most desperate efforts, at length succeeded in escaping from my grasp. Leaping over tables, chairs, and all that came in her way, she repeatedly threw herself, with frightful violence, against the top panel of the door which communicated with the disused room. Then, returning in the same frantic manner, she furiously dashed against the door on the opposite side.

“My terror was divided, and I looked by turns, now at the old woman, whose great staring eyes were constantly fixed on me, and now at the cat, who was becoming every instant more frantic. At last the dreadful idea that the animal had gone mad had the effect of restoring my breath, and I screamed loudly.

“Mamma ran in immediately, and the cat, on the door opening, literally sprang over her head, and for upward of half an hour ran up and down stairs as if pursued. I turned to point to the object of my terror: it was gone. Under such circumstances the lapse of time is difficult to appreciate, but I should think that the apparition lasted about four or five minutes.

“Some time afterward it transpired that a former proprietor of the house, a woman, had hanged herself in that very room.”

The close but evidently unsuspected resemblance of this narrative to the story of Balaam is worthy of notice. In both cases we have the remarkable fact that the animal was the first to see the spiritual being, and to show by its terrified actions that it had done so.

I’ve previously written about another cat, Fluff, who saw a phantom and saved her master, and about horses that scent death. And I have a silly theory that cats stare fixedly at that point just below the ceiling, just to make us uneasy, but Lady Catharine’s terror was beyond feline fakery. What could account for it? Do cats hear sounds we cannot? Do their eyes see colors beyond our range?  What, exactly, did the cat see? Which begs the question, would the lady narrator have seen the terrifying apparition if the cat had not?

Other examples of animals seeing the unseen? chriswoodyard8 AT gmail.com

Just after this post was published, this article on “do cats see ghosts?” was making the rounds.