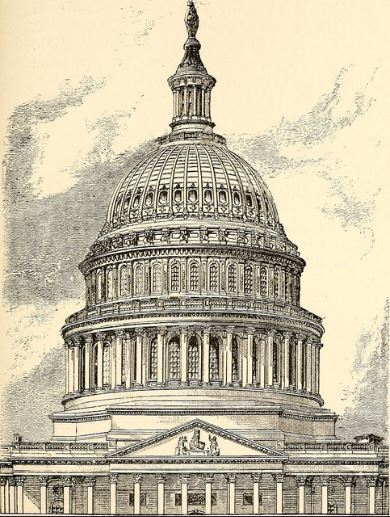 While we like to imagine that we have a government full of wise and prudent legislators, high office is no guarantee of sagacity or sense. Some of us may remember the D.C. celebrity psychic, Jean Dixon, or the scandal that arose when Nancy Reagan consulted an astrologer in the White House. Some of us even recollect Mrs Warren Harding receiving a dire prediction about her husband from Washington psychic Madame Marcia.

The papers of the past often ridiculed such things as “superstition,” linking it to a lack of education or to ethnic or racial minorities. It carried such a pejorative subtext that it is surprising to find it in the following setting.

It is not a thing which is generally known, yet it is true, that there are a great many public men in Washington who are superstitious in the extreme. There are eight senators, [John H.] Mitchell [Oregon]; [Cushman] Davis [Minnesota]; [John H.] Reagan [Texas]; [Samuel] Pasco [Florida]; [Charles F.] Manderson [Nebraska]; [Charles J.] Faulkner [West Virginia]; [Daniel] Voorhees [Indiana]; and [Henry Laurens] Dawes [Massachusetts], who are averse to riding in a street car, herdic [a horse-drawn omnibus], or any other kind of vehicle drawn by a white horse. It is said that ill luck follows in either business or pleasure immediately after riding behind a white horse.

A few days ago one of the senators named had gotten on a street car without noticing the color of the horses, his mind being absorbed in some other mighty question. After having paid the necessary fare he looked toward the front end, and to his horror discovered that there were two snow-white horses pulling the car. With a motion as quick as sight had taken in the white steeds, the able senator jumped to his feet and called the conductor to stop the car at once, though it was not stopped till after the senator had touched the ground. In his haste to get out he could not make his exit with as much accuracy as he desired, and was thrown from the step.

The senator, relating the incident to some friends a day or two later, said it was a superstition which he could not overcome, and that in many cases the riding behind a white horse had been followed by bad luck in the extreme. In speaking of the circumstance of alighting from the car so quickly, the senator also said that, notwithstanding the fact that he was in the car only a minute or two, he had been hoodooed as it were, and that on arriving at the post office department, whither he had started to ride, he met there the ill luck which he attempted to keep off. He had gone there to urge the appointment of a friend to a place in the service, and on the day before he had every reason to believe his friend would receive the appointment, but on the day in question he was disappointed, the friend of a member of the house having been selected. The senator attributes it all to the white horse drawing the car.

There are a number of members of the house also affected with the same superstition. At the last session of congress there were ten or fifteen members who were speculating in stocks to a considerable extent, and especially in Central and Union Pacific railroad stocks, pending the passage of the resolution providing for the investigation of the roads.

[Archibald M.] Bliss, of New York; [Julius C.] Burrows, of Michigan; [John G.] Sawyer, of New York, and [James Hugh] Ward, of Illinois, all of whom speculated more or less, were each possessed of the belief that an itching in the palm of the left hand was an indication of a lucky investment. When the hand would itch, they would scratch it on wood, generally using the sides of their desk, and then quickly hurry out of the office and telegraph to New York brokers their orders.

One member, who now tells the story, said that in one deal into which he was led by the itching palm, he made in two days’ time over $1,700. Senator [William M.] Evarts, upon seeing the new moon for the first time, will always stop and gaze intently at it for a few minutes. He dislikes seeing the moon over his left shoulder or through a tree. In this respect he is not unlike the average woman, who invariably makes a wish upon seeing the crescent. Senator [John J.] Ingalls is a victim of superstition also. Jackson [MI] Citizen 10 January 1888: p. 4

That last sentence seemed tantalizingly inadequate, so I looked further and Senator Ingalls had quite an interesting story to tell. But let me add one more anecdote about an unnamed senator before we hear from our distinguished colleague from Kansas.

Superstitious people can be found in all walks of life. There is a southern Senator who has overcome all his superstitious beliefs but one. He will never make his exit form a room through any other door than the one that he entered by. The other day his committee held a very important meeting at which the Senator was present. Immediately outside of the door of the committee room several newspaper men lay in wait for the committeemen to come out to obtain information as to the action of the committee. The room has two doors, only one of which is used, however, as a thoroughfare, the other being used only on extraordinary occasions. Two of the committeemen in order to give the slip to the newspaper men went out the unused door. But the superstitious Senator, although advised of this way of escape, could not overcome that superstitious feeling, and out the main door he went. Of course he was immediately surrounded by his newspaper friends, with whom he is very popular, and was subjected to severe cross-questioning. The Senator said afterwards: “It was a mighty hard job to turn those boys down, but I would have felt worse had I gone out that other door.” Evening Star [Washington DC] 15 February 1896: p. 14

Now, the Chair recognizes the Senator from Kansas:

United States Senator John J. Ingalls of Kansas, who made such a savage attack a few days ago on the Southern Democrats, and was so badly used up by Senator Blackburn of Kentucky in a debate on the pension bill, is a Boston man and a cultured one at that. Nevertheless he is said to be extremely superstitious. He has a dread of seeing the moon over his left shoulder, and will not commence a journey or an important piece of work on Friday. He is reported to have said to a newspaper man recently: “When I was about 6 years old I was one afternoon down on the bank of a familiar stream that crept into a pool at that point near my home, and I was thinking about the problem of whence and wherefore that has puzzled me ever since. Suddenly a strange shadow fell on that lucent pool, and in the shadow I saw a certain date vaguely and tremulously outlined. I was impressed that it was the date of my death. Perhaps it was not, but the impression was vivid and permanent. I have never shaken it off.

“I never would begin a journey on Friday, or any important piece of work, and there is a number, other than the date I have alluded to, which has been so uniformly disastrous to me that I always avoid placing myself in relations with it. If I were about to take the train and saw the fatal number on one of the cars I should go back and wait for the next train.” Times-Picayune [New Orleans, LA] 11 March 1888: p. 6

The full interview with Senator Ingalls can be found at in the Atchison [KS] Daily Globe 8 March 1888: p. 4. I will mention that the Senator had a reputation as a wit and a satirist, but he sounds dead serious in the interview.

The journalist interviewing him was unable to extract the “fatal date,” from the Senator. Does anyone have any more information as to whether he ever revealed the date he saw in the pool? Make up a quorum and send to chriswoodyard8 AT gmail.com

And are there any current reports of senatorial superstition? It seems that Congress ought, like many institutions, to have its own set of folk-beliefs. (Freshmen congressmen are told to go to the Lincoln Memorial at the dark of the moon, walk counter-clockwise around the statue three times, and say “Bloody Abe” three times in a high falsetto voice. If this is done, the statue will arise and grant the freshman the ability to get their bills out of committee and up for a vote. If the ritual is not followed exactly, the unfortunate freshman will be found drowned in the Reflecting Pool clutching a large marble finger carved of Georgia marble.)

For other Washington forteana, see The Fortean White House and the Shadowgraphs at the White House.