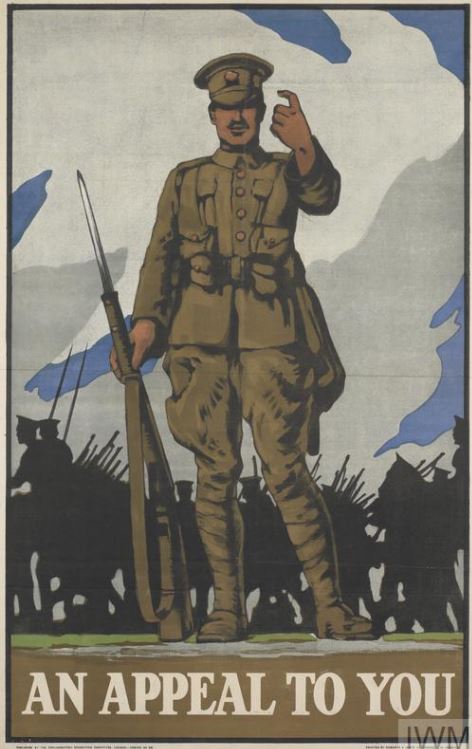 The Beckoning Soldier. A soldier beckons for comrades to join him, c. 1915 http://www.iwm.org.uk/collections/item/object/28454

For this 99th anniversary of the Armistice and for Veteran’s Day, an eerie story from a survivor.

In the summer of 1918 our battalion formed part of the renowned 10th French Army of Verdun, under General Mangin, nicknamed the ‘Butcher’ by the poilus. We had been action for several days, and had lost heavily, and on the day of which I write were hanging grimly on to a line of isolated shell-hole posts that formed the firing-line, a few kilometres left of Buzancy.

In front of us extended a wide stretch of open country, over which we gazed wearily to a distant line of poplars that bordered the Soissons-Chateau-Thierry road. As we lay, ever and anon glancing along the rifle sights as the Germans showed themselves, we fell to counting and recounting those slanting trees.

It became a maddening task, this self-ordered one, as the poplars steadily diminished in size till they became indistinguishable as individual trees in a grey blur on the line of the horizon. I suppose that those trees held a peculiar interest for us, in that they formed the first objective towards which we had received orders to advance on the morrow. The enemy lay strongly entrenched between, and we had already made a very costly attack on his positions.

The sergeant of our platoon lay dead beside us, and his duties had temporarily devolved upon me. Fritz had just made a feint of attacking us, but we had repulsed him, though the fact that his artillery continued to shell us indicated the probability of a further attempt on our line.

Towards sundown the bombardment slackened appreciably, and, as the light of day began to fade away into the wet, it was possible to take a more careful survey of the position. Our platoon officer had just crawled into our shell-hole, which now held five men all told.

Looking towards our left front in the direction of a German strong-point, I was surprised to see one of our fellow standing on the top, about seventy yards away, and beckoning urgently in our direction. As he did not desist from doing so the officer’s attention was drawn from his trench map towards him, and he immediately focused his field-glasses upon the disconsolate figure. Almost immediately he lowered the glasses to his breast and scanned me somewhat wanly before resuming his observation. He was a good fellow, this officer, and never set anyone a task he feared to carry out himself. ‘I cannot quite make out who he is,’ he said, as we all continued to watch the anxious figure of the beckoner, ‘but he must belong to “A” Company, who have posts somewhere on our left. There is a bad gap in our front just here. Go you, corporal, and see what the fellow wants. I shall remain in your post till you come back. It’s not far.’

I thought it rather a tall order, so to speak, as the light was still very good, and the German snipers on the alert. As my foolhardy friend of ‘A’ Company was not being fired at, though his body was recklessly exposed, I took a careful note of my directions, and climbed out on top. Simultaneously the shelling recommenced.

A raid by the enemy would certainly result in my capture. About half-way out a shell-hole offered a convenient resting-place, and there I examined my magazine while recovering breath. There yet remained about thirty yards to traverse to the stump of the tree from the neighbourhood of which the man had signaled. He was not now visible, nor could the least indication of a trench or other position be found when at last the blackened root was reached. Stranger that all, no signs of his presence were apparent, nor, though I called repeatedly, did he hail me or otherwise endeavor to attract me towards him.

Thoroughly nonplussed, but quite unsuspicious of anything abnormal, I started to crouch around in an endeavor to locate him. Obviously ‘A’ Company’s posts were much further in the rear, and I was alone in No Man’s Land. The shadows of the gathering night were now over all things. The obscurity prompted me to make a close and final search before returning with the stupid report that my mission had been unsuccessful.

The odour of death hung heavily over the spot, drifting up from the riven ground like vapour from a tropic swamp. The brooding sullenness of this vile quarter was sufficient indication that there was no one there, that there never had been anybody there, save the ghastly dead. It was now that my thoughts began to play with the vague idea that the beckoning figure had been a vision of unreality. In a flash I understood, or thought that I understood. One night in Ypres I had seen a man die who imagined that I had befriended him once in the trenches, and who had said a very strange thing to me as the light of life had flickered out of his eyes.

The sky was now palpitating with the flashes of the guns, and the night air was stirred as by the rushing wings of a multitude of fiends. At length my post came into view, but even as I caught sight of the darkly silhouetted figure of the officer the roar of a descending trench-mortar caused me to lie flat on the earth. It was a big fellow, one of the dreaded ‘rum-jars,’ and the debris showered upon me as it burst.

Little need for me now to rush forward with a cry—little need indeed. The occupants of the post were dead. The only thing I found that was not mutilated was the officer’s field-glasses. Many a time since that night have I wondered what they revealed to him when he directed them towards the spectral figure that beckoned so steadfastly.

Was the phantom drawing the narrator away from death or was there a skull-faced soldier beckoning to the officer to “come on over?”

And somehow it seems like a sentence or two is missing from that enigmatic bit about seeing a man die in Ypres.

Other eerie tales from the Great War? chriswoodyard8 AT gmail.com  C’mon this way.