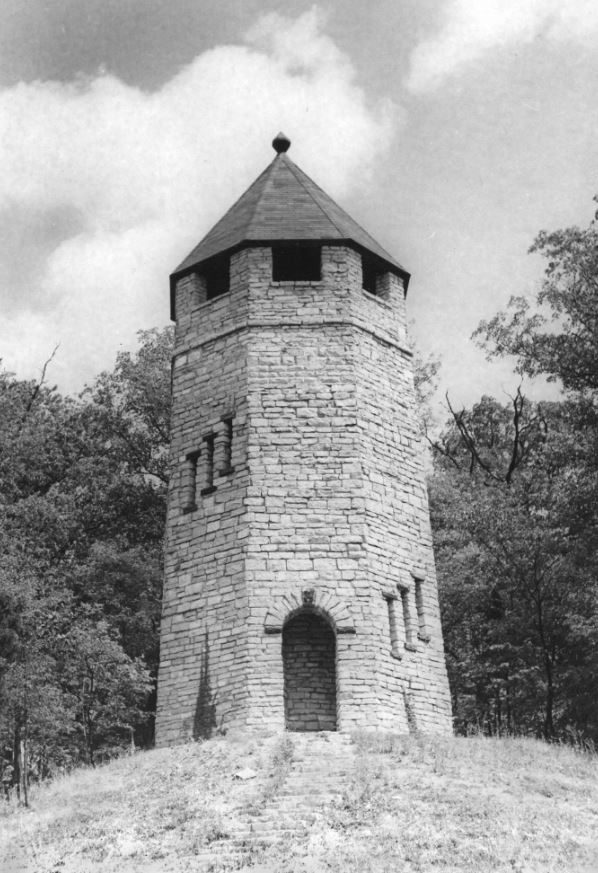 Once again Atlas Obscura Day has rolled around and what is Ohio doing to celebrate? When I looked at the roster of upcoming events, the program was the same as two years ago: A visit to the Edwards Accelerator Laboratory in Athens, Ohio where you can “tour the 4.5-million-volt tandem particle accelerator.“ No doubt an educational and edifying day, but somehow in a state with a discriminating selection of witch’s graves, haunted cemeteries, and serial-killer childhood homes, the laboratory seems a less-than- compelling choice. Yawn. Particle-bored…

And a second event has been added: The John Brown Monument Tour led by a puzzling partnership of the Akron Zoo and the Summit County Historical Society. The monument to abolitionist Brown, standing “on land where Brown once shepherded a herd of Merino Saxony sheep for Col. Simon Perkins, this rugged terrain, currently not open to the general public, makes for an interesting hike that also features monuments to local women on plaques attached to large boulders. “

That must be very uncomfortable for the local women.

I was also driven to wonder if the species of sheep makes a difference to the event. Would it be a less interesting hike if the sheep had been, say, Leicester Longwools?

What I am driving at is that, for a state that is “first in flight” “Mother of Presidents,” “So Much To Discover” “The Heart of It All” and which urges tourists to “Find It Here.”  (a slogan that seems to equate the state with a medical building’s lobby directory) for three years, Ohio has been unable to muster even the bare minimum of Quirky to celebrate Atlas Obscura Day.

Lord knows, I’ve done my best, suggesting a Hatchet Man’s victims’ graves and an extraordinarily preserved nineteenth-century Wunderkammer. This year I’ll try again with a mysterious stone tower, said to be frequented by witches, and site of a vastly more-than-4.5-million-volt tragedy.

When I first moved to Dayton, while exploring one of its many Patterson Avenues, I was startled to find a medieval-style stone tower apparently guarding the fiefdom of John H. Patterson, whose paternalistic policies towards his National Cash Register employees and gallant conduct during the great Dayton Flood, suggested a Lord of the Manor.

No one seemed to know very much about the tower, which went by various names. Some said it had been built in the late 1800s; others suggested the 1930s.  I was told a story about a group of young people who had been killed by a lightning strike at the tower, but (and this was in the age of unindexed newspapers on microfilm) I could find no confirmation of this story, which, frankly, sounded like an urban legend. When  I spoke to several members of the Kettering Police force and Emergency Squad, they all said that they remembered the incident well, but couldn’t recall the victims’ names or the specific date, except possibly “in the ‘60s.”  So I wrote up this little squib of a story as local lore among the 100+ stories in Haunted Ohio III and there the matter rested.

The Stone Tower, Patterson Tower, Witches’ Tower, Frankenstein’s Castle—whatever name you call it, it is a startling sight: a Norman keep overlooking Dayton’s Community Golf Course along Patterson Avenue.  There are no records of when or why it was built.  Researchers studying Hills and Dales Park suggest that it was built by CWA [Civil Works Administration] workers in the 1930s as an observation tower.  Others believe John D. Patterson built it. [Patterson died in 1922.]

In the 1960s, a group of teenagers were hanging out at the tower when a summer thunderstorm blew in. They scrambled inside and sat on the stairs, laughing and talking, confident that they were safe.  After all, the walls were nearly a foot thick.  But lightning struck the tower, and sizzled down the metal stair rail, electrocuting two of the teens.  For weeks you could see scorch marks on the walls.  After that, metal plates were riveted over the door and over the barred slit windows.

Now, on thunderous nights, it is said, you can see the black silhouettes of the two dead teenagers suddenly light up as lightning explodes at the tower.

The metal plates covering the upper windows have been wrenched off by the curious so that you can see the bars at the windows, the spiral staircase leading to the top of the tower. The ground in front of the tower’s door is scorched in a spidery pattern.  Another lightning strike?  Bonfires set by kids just hanging out?  Or an eternal reminder of a fiery tragedy?
Haunted Ohio III: Still More Ghostly Tales from the Buckeye State, Chris Woodyard, 1994: p. 145

Several years ago, however, a friend of mine, Curt Dalton, whose history chops I am not worthy to grill, found a one-paragraph story on the real tragedy in a newspaper from Van Wert, Ohio—about 100 miles north of Dayton. Using that information, Curt found more details and the shocking truth: that one person did die that day at the tower.

BELLBROOK — A 16-year-old Bellbrook High School sophomore was instantly killed and her 17-year-old male companion, a junior at the school, seriously burned, apparently victims of a bolt of lightning during a severe electrical storm Wednesday night in Kettering.

He was listed in fair condition this morning at Kettering Memorial Hospital where he is receiving treatment for burns.

Kettering Police said they received a report at 8:03 p.m. that someone was injured at the Lookout tower in Hills and Dales Park. The tower stands high on a wooded hill on the east side of Patterson Blvd. in the southeast end of the park and is used for observation.

Police found the Stevens boy lying at the foot of the stairs. He had been burned on his chest and face. The Harmeson girl was found nine steps up the tower dead. She had been burned extensively on the face and chest area, police said.

“The best we can tell is sometime around 7:30 there was a bad lightning storm here and apparently a bolt of lightning hit the tower. A ball of fire may have hit at the door and rolled up the stairs. They were no doubt on their way down and she was in front and got the full force,” police said.

Police said the tower is made of stone. There is a metal gate on the front.

Apparently the couple was out driving, decided to visit the observation tower and were caught in the storm. Police said they were not sure of all the details because the boy had not been able to remember exactly what happened.

“The boy was pretty incoherent. He didn’t know anything. He thought he had gone home,” police said.

The Montgomery County coroner’s office said this morning that it had not yet ruled on the cause of death. However, Kettering Police said it no doubt would be ruled accidental death by lightning.

REQUIEM MASS for Miss Harmeson will be held Saturday morning at Church of the Incarnation, Centerville, with Rev. Raymond C. Kallaher in charge. Burial will be in Calvary Cemetery, Dayton. Friends may call at the R.L. Ullmer & Son Kettering Chapel, 4100 Benfield Dr., Friday from 3 to” 5 and 7 to 9 p.m.

She is survived by her parents; her paternal grandmother, Mrs. Blanche Harmeson of Dayton; two sisters, Nancy Kay and Susan Marie, and two brothers, Mark Timothy and Stephen Roy.

She was active in the Girl Scouts and was a member of Senior Troop 771 of Bellbrook.

Curt also found details in a Dayton newspaper, solving the mystery of how and when the structure, originally known as the Hills and Dales Lookout Tower was built.

Reminiscent of the old Schantz Lookout Tower, Hills and Dales Lookout Tower has recently been completed on Southern boulevard south of the Patterson monument, overlooking the Community Country club. It was built by the boys of the National Youth administration, the work being done under the direction of Earl Shock, superintendent of the Community Country Club. It required a year to build, is constructed of stone salvaged by the city from condemned buildings, is 56 feet high to the peak of the roof and offers a view of 15 miles around. It is reached by 50 steps from the boulevard and 50 more steps from the entrance to the lookout platform. The walls are more than three feet thick in places.

Much like the Civilian Conservation Corps, the National Youth Administration was set up in 1935 by President Roosevelt and was designed to “provide work and education for unmarried men and women between the ages of 16 and 25.” [Made Do or Did Without: How Daytonians Coped in the Great Depression, Curt Dalton, 2015]

Ronald Stevens got out of the hospital on 28 May, 1967. In an interview with the Xenia newspaper he said he didn’t even remember leaving his house. He went into the United States Air Force from 1968-1972, serving in Vietnam. He died in 1991.

For a long time the tower stood derelict; the illustration in this link shows how the mighty were boarded up. But today, even though the roof has not been replaced and the interior is off limits, the exterior and the grounds have been cleaned up and a fence and a retaining wall have been built to shore up the sloping ground. Here’s a relatively recent photo from Google Earth. It looks very Game of Thrones or a fit place for witches to dance. You can visit, but please do not try to break into the tower and take your trash away with you. And no bonfires, not even to celebrate Atlas Obscura Day.

The legends that the tower is haunted still persist.  Personally I would not care to be there during a storm, or, for that matter, in the dark.

Many thanks to Curt Dalton for his help with this story. You can find more discussion on the Tower at his astoundingly complete website Dayton History Books Online. This site is a labor of love for Curt, who is the author of several dozen books on Miami Valley history. He has created and runs the site entirely without any official support.  It is a model of what local history sites ought to be.