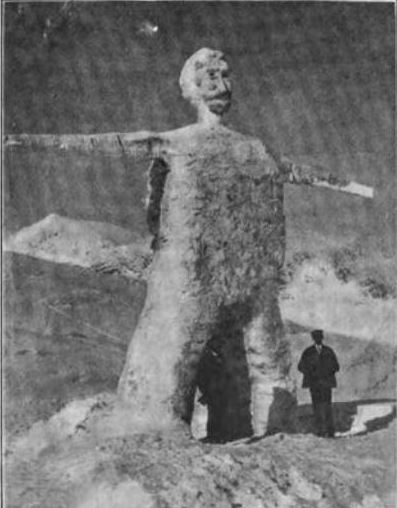 The Abominable Snow Giant The giant snowman on the US/Canada border.

I have never been a fan of snowmen. Misshapen, cold, black-eyed, and with a rictus grin like the Joker, it is a wonder that they have not sprung to meme-life like Slenderman or become recurring villains on Dr Who.  They are obviously cads since they wear top hats and smoke. And I always assume that there is a corpse concealed inside. So finding the photograph above merely reinforced my hominochionophobia. This is what happens to men who go to the Great White North and find themselves with too much time on their hands.

“There is perhaps no place in the whole wide world where the long hours of the dreary winter drag more slowly than in the mid-land of the New North of America, the vast waste of ice and snow-covered wilderness broken only at very irregular intervals by straggling settlements that in the rush of the short-lived summer are boastful cities in embryo, but which, with the falling of the mercury to  50 deg. and 60 deg. below zero, are but halting-places for the men of iron mould who trek it over the river-ice to or from Dawson City. The coming of these, the daily arrival and departure of the stage up or down the solid-frozen Yukon, and the consideration of the comparative merits of dog teams make up the entire chapter of winter life from Whitehorse, the railway terminus, through to the Klondike goldfields, five hundred miles or more of bleak, inhospitable desolation. Nowhere in the broad and busy world are the contributory elements of suicidal melancholia more in evidence, and when an enterprising resident of The Summit proposed some few months ago that the entire population of the boundary post ‘turn out and build a snow man,’ his ennui-breaking suggestion was hailed with glad approval, albeit the overworked thermometer showed minus 52 deg., and the comforts of life upon the mountain tops that mark the provisional inter-national boundary are notably inconspicuous in fact. The people of the American western and northern wonderland do nothing incompletely; hence their snow man takes precedence over all other snow men that yet have been. He calmly guards the peak on which there are flying side by side the significant banners of Great Britain and the United States, looking serenely down upon a sea of snowy ridges and a rugged wilderness of valley through which the world’s northernmost railway crawls from cliff to precipice in manner most uncanny. The snow man is himself a trifle reminiscent of bygone days of giants upon the earth, for from base to crown he stands thirty-two feet six inches high, a glittering and conspicuous, if scarcely an artistic, figure. As the blocks of snow were piled in place, water (readily obtained by melting the convenient snow) was used with prodigal liberality until the snow man be~ came in truth a man of ice, and lasting as other ice formations in these latitudes. The fancy of the architect has made him Janus-headed, and when imagination is coerced to aid the eye the features of the serene and silent sentinel of the snowy summit are recognised as those of His Majesty King Edward overlooking the British domain and of Uncle Sam on the American side.” [Is that the face of Uncle Sam or King Edward?]-—Mr. C. H. Gibbons, Editor, Vancouver World, Vancouver, B.C.

One can only imagine conditions when sculpting Ymir was the alternative to “suicidal melancholia.”  I wonder how long the figure survived? There must have been some thumpety thump thump when it came down.

Apparently creating snow figures was quite the 19th-century winter entertainment although not always on such a large scale. [Another day, another post.] Even today the abomination persists. Back in 2010, this all-too-jolly giant snowman was built in Poland, with a traffic cone for a nose. Other examples?  Catch me if you can. Chriswoodyard8 AT gmail.com