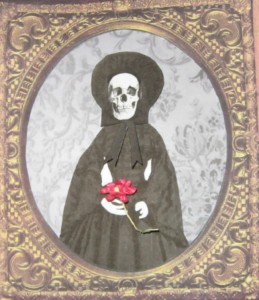 This site is about much more than just Haunted Ohio, although I got my start writing a series of books on Ohio’s ghost lore. I write about Victorian mourning practices–particularly its more eccentric manifestations. I write about ghosts, spook lights, incendiary polts, strange visions in the sky, monsters, Marian apparitions, and forteana from around the world.

I call myself a “fortean”. Forteans are named for Charles Fort, a researcher of all things strange. Here is what the Fortean Times website says about Charles Fort:

Born of Dutch stock in Albany, New York, Fort spent many years researching scientific literature in the New York Public Library and the British Museum Library. He marshalled his evidence and set forth his philosophy in The Book of the Damned (1919), New Lands (1923), Lo! (1931), and Wild Talents (1932).

He was sceptical of scientific explanations, observing how scientists argued according to their own beliefs rather than the rules of evidence and that inconvenient data was ignored, suppressed, discredited or explained away. He criticised modern science for its reductionism, its attempts to define, divide and separate. Fort’s dictum “One measures a circle beginning anywhere” expresses instead his philosophy of Continuity in which everything is in an intermediate and transient state between extremes.

He had ideas of the Universe-as-organism and the transient nature of all apparent phenomena, coined the term ‘teleportation’, and was perhaps the first to speculate that mysterious lights seen in the sky might be craft from outer space. However, he cut at the very roots of credulity: “I conceive of nothing, in religion, science or philosophy, that is more than the proper thing to wear, for a while.”

I neither “believe” nor “disbelieve” the material I collect, study, and write about. It isn’t really a question of belief. M.R. James, the famous British ghost story writer once said, “I am prepared to consider evidence and accept it if it satisfies me.” I collect information and I look at patterns—how many people report the same kinds of ghosts or phenomenon. How often poltergeist phenomena swirl around disturbed or traumatized individuals, particularly teenagers. How often stressed people would rather see ambiguous or unusual happenings as ghostly or demonic, rather than deal with the real, earthly roots of their problems.

I’ve often joked that I ought to study to become a psychologist because I so frequently end up offering, not psychic, but psychological explanations for strange occurrences. This is not to say that mysterious and (to me) unexplainable events do not happen. But the percentage that I have been called in to investigate that appears to be “ghostly” is very very small. Perhaps 95%, perhaps more, of my cases have their origin in a disturbed living human being unable to cope. This, to me, is almost more interesting than genuine ghosts—what is the mechanism that allows the human mind to generate electrical disturbances and other physical phenomena?

But then, there is that remaining 5%…..  It seems to run in our family to see and sense spirits. When I see them they look solid and very real. As a former vintage clothing dealer, I can frequently date the ghosts I see by their clothing. It’s a strange thing to walk into a property with no knowledge of the history or people (a requirement of mine–I don’t want to know anything until after I’ve had a chance to walk through and take notes) and see the same things that have been haunting the owners.

I am not a member of any ghost clubs or organizations because a) I’m not a joiner and b) I prefer to work alone.  I am pretty much retired from making paranormal house-calls, but there are always exceptions.

Other stuff: Originally from Columbus, Ohio, began college studying to be a librarian at Bowling Green State University, degree in Medieval and Renaissance Studies from OSU, lives in an unhaunted house near Dayton, Ohio with her husband. Collects books, dollhouse miniatures and fish castles. Former church organist. Relentlessly Informative.

I am currently working on various non-fiction projects, several mystery series, fictional horror stories, and some historical novels. You may read about a sentimental succubus, a vengeful seamstress’s ghost, Victorian mourning gone horribly wrong, and, of course, Mrs Daffodil’s efficient tidying up after a distasteful decapitation in my collection, A Spot of Bother: Four Macabre Tales in the Amazon Kindle Store and at Barnes & Noble, for the Nook. Written in the spirit of Saki and P.G. Wodehouse, these four neo-Edwardian stories will appeal to ghost-story lovers as well as fans of Downton Abbey, costume history buffs, and fanciers of Victorian life and culture.

The title story, “A Spot of Bother” introduces Mrs. Daffodil, housekeeper at stately Whitsend Hall. When Nancy, the still-room maid is decapitated by the dumbwaiter, Mrs. D. is there to tidy away the family skeletons in an ever-widening circle of murderous accidents. Mrs. Daffodil demonstrates why she has been dubbed the unholy love-child of Jeeves and Mrs. Danvers. Think Downton Abbey meets Dexter…

Here are my most recent non-fiction books:

The Ghost Wore Black: Ghastly Tales from the Past, covers stories from around the USA, including fiery devils stalking Kentucky, bloody handprints left by a ghost in San Francisco,  the walking corpse of a woman in Michigan, banshees and other evil entities, the girl who married a ghost, and the terrifying Women in Black, believed to herald death wherever they walked.

The Face in the Window: Haunting Ohio Tales is a scrapbook of Victorian horrors drawn from 19th- and early-20th century sources, including grisly ghost stories, spook lights, poltergeists, and Women in Black.

The Headless Horror: Strange and Ghostly Ohio Tales, continues to unearth the ghosts of the past, as well as monsters, Fortean mysteries, wonders and curiosities, and the paranormal history of Pearl Bryan. You don’t need to have any connection with Ohio to enjoy these treasure-troves of long-lost Forteana.