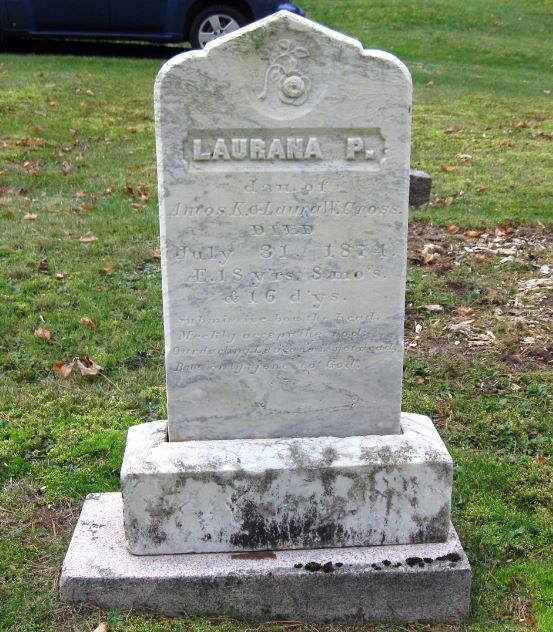 Driven to Death by a Curse: Laurana P. Cross

I seem to be rather haunted by curses and talismans lately, but never mind, we’ll get to the Christmas-season horrors soon enough…

I had vacillated about posting this story after the holidays, but recently Dr Beachcombing wrote about a tragic young governess who drowned herself because she believed she saw madness and death in her hand.  I was struck by some similarities in this story of a New Hampshire school mistress, who, it was said, was

DRIVEN TO DEATH BY A CURSE

Miss Cross, a school teacher in Stark, N.H., lately committed suicide by drowning, under the following circumstances, as related by a local paper: She had had charge of the school for several weeks. The scholars thought much of her, and till within a short time before her death she kept an orderly and excellent school. But during the last week all seemed to be disorder and confusion in the school. The committee, Dr. A. Thompson and M.T. Pike, esq., having heard of the fact, visited the school on Friday, and found it much as above described, on which after the school was dismissed, they kindly talked with her privately relative to the school, told her how it seemed to them, and advised her, as she appeared pale and nearly sick, quietly to go to the agent and resign her position; or if she felt strong enough to go on with the school, and thought she could improve in the particulars they mentioned, she could do so. She said she would determine what was best between that time and the hour of school the next morning. They left for their homes. She did not return to her boarding house that night, and her friends became alarmed. The school house was locked. On looking in at the window, the key was seen on the floor. On entering they discovered on her desk some little articles of value she had taken from her person and the following note addressed to her sister.

Dear Mary—All I have to say is that the curse is fulfilled. The daughters shall die in sorrow if not in shame before they are twenty. Ask Albert Thompson and Thomas Pike why. Good bye all.

Search was made for her body. The school house was situated on the bank of the river, where the water was deep and still, and the body was found near by. Before the coroner’s jury her sister explained the note by relating that they were the children of Amos K. Cross, of Waterford, Me., and that in consequence of some difficulty between them, her father separated from his first wife, and was again married, on which his mother, taking sides against him, pronounced with dreadful emphasis this curse upon her son’s children: “His daughters shall die in sorrow, if not in shame, before they are twenty, and the sons shall be cut of in infancy.” She said that for some time Lauraina had constantly dwelt upon the subject of the curse, and the more so, recently, as she was nearing the age of twenty, and she had done and said things which had caused her to think her sister meditated suicide. And her room-mate testified that only a week before she had spoken of it to her, and alluded to the fact that she was over nineteen years of age, and if the curse was fulfilled she had but a short time longer to live. The fact that some of her brothers died in infancy tended to strengthen the superstition, that insanity and death were the consequence.

The unfortunate young woman’s name was actually Laurana P. Cross and she died 31 July 1874. Her brother Frank, born in 1854, did not reach his first birthday. Another sister, Caroline, died of spinal meningitis at the age of 24, only six years after her marriage. After Amos Cross divorced his first wife, he married Laura Wheeler, a widow with children. It was one of these children: Mary H. Wheeler, to whom Miss Cross addressed her letter.

Another article about the tragedy added this editorial comment:

But what could be the remorse of the wretched woman who had wrought the ruin? Let us hope she is dead, and beyond the knowledge of the verification of her fearful curse. Yorkville [SC] Enquirer 12 November 1874: p. 1

That would be Persis Kimball Cross, mother to Miss Cross’s father Amos. I could not find a death-date for her, but she married in 1801, so she would have been aged, if not dead by the time of her grand-daughter’s suicide. It was a despicable thing to have said to anyone; what person—heartless or heedless—made Miss Cross aware of it?

In the annals of Victorian suicide, there is a small  subcategory of persons killing themselves in advance of a deadline, anticipating a death too dreadful to be borne.  It is, one supposes, a way to control the seemingly inescapable.  I have in my files, for example, the story of a young woman who was said to have killed herself because of that hoary, penny-dreadful plot-point, the Gypsy’s Curse, which gave her ten days to live. [Another day, another post.]

Other suicides with paranormal elements? chriswoodyard8 AT gmail.com