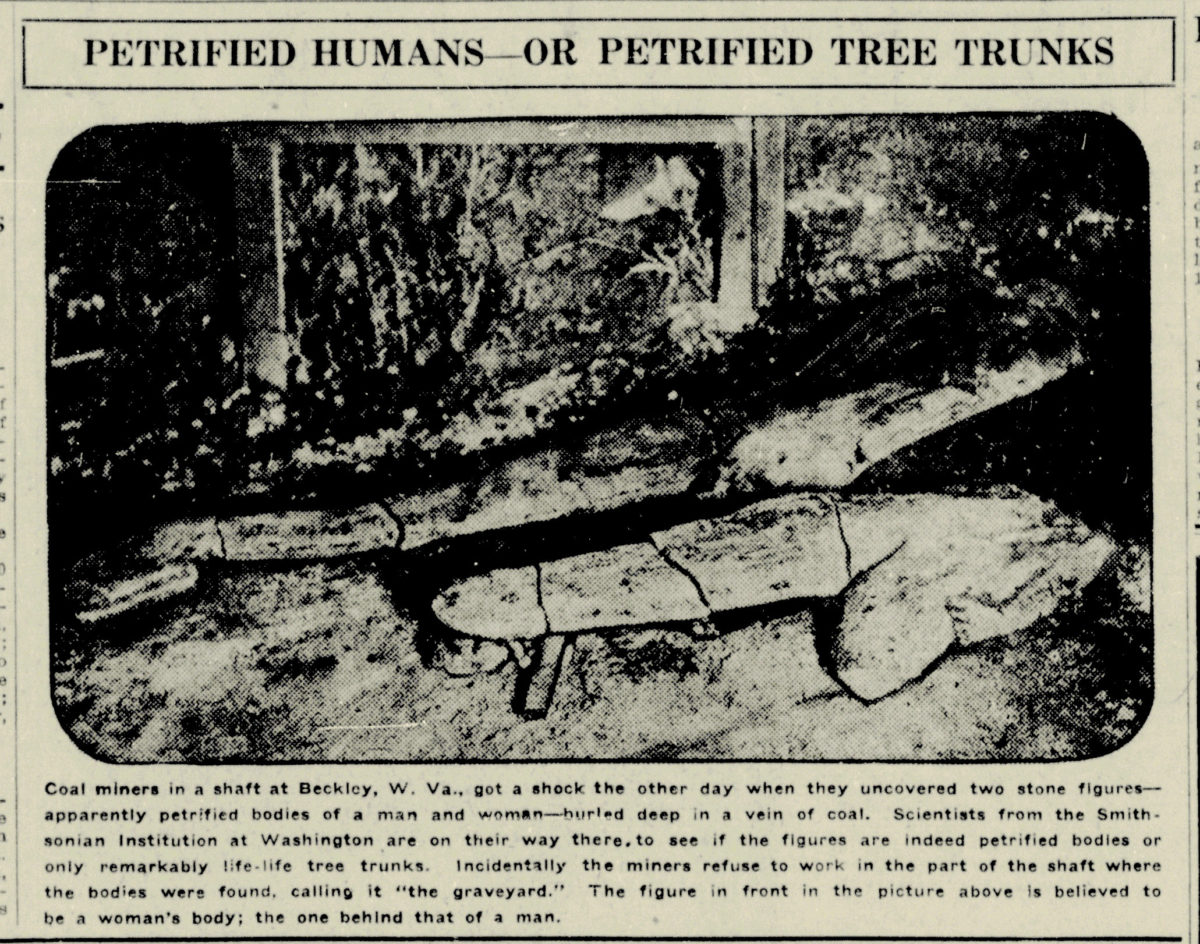 Farmer Burrows’s Stone Corpses Stone corpses said to have been discovered in a Beckley, WV mine.

Tales of petrified corpses thrilled the readers of nineteenth-century newspapers, particularly in the 1870s and 1880s, perhaps inspired by the “discovery” of the Cardiff Giant.  Generally the stories ran something like this:

The Seneca Falls (N.Y.) Courser says, “About six weeks since, L.C. Boardman, of this place, was engaged by D.V. Benedict, of Buffalo, to disinter his wife, who was buried in the Canoga Cemetery four years ago this month, and forward it to Buffalo for reinternment. The coffin came apart in the operation, and the corpse was found to be as natural as when buried, and as hard and heavy as stone. The clothing had rotted and lay in folds upon the form, which was as white as marble. The deceased was a sister-in-law of Mr. Boardman, and he says the features were perfectly natural and full as when in life. The body had turned to stone, weighed 400 pounds. This is a genuine case of petrifaction and no mistake.”

Down at Quincy, Shelby County…a petrified woman has been discovered. She is no Cardiff giant, but a Mrs. Kellison who used to live in Illinois. [She died while on a visit to her son and was buried on his farm.  He sold the farm and it was then that the petrification was discovered.] The body had turned to solid stone, and it took a dozen men with ropes and pulleys to drag the remains from the grave. The old lady was 70 years of age, in good flesh, and weighed 130 pounds when she died. When exhumed the petrification was perfect, and the only part of her body lacking is a small portion of the left [part] of the nose. The weight of the body is now estimated by good judges to be at least 1,000 [lbs.]. The remains have been laid away in Prospect Graveyard, Quincy, Ohio, where they now are, but Mr. Kellison promised them to a scientific gentleman, who intends to present them to one of the medical museums of the State.

But there was another category of petrified corpse, those found “in the wild,” so to speak, rather than in the graveyard, and it was these that were the object of fantasy, speculation, and perhaps outright fraud. For example:

A petrified body, supposed to be that of an Indian squaw, was found in a St. Louis suburb by a workman employed to dig a cellar. Its resemblance to the human form in death is remarkably perfect. It lies straight, the hands lying across the breast, but not folded together—the left being several inches nearer to the chin than the right. The hands and feet are perfect to the minutest details, and the features are perfectly preserved. The ends of two teeth—as white as ivory—show between the partly-opened lips. The length is 5 ½ feet. A number of irregular shaped depressions appear on different parts, giving it the appearance of having been severely wounded, or suffering from numerous eating sores.

Petrified Bodies in a Cave.

Cleves, O., March 15. The cavern found on Dr. Terrill’s farm in Boone county, Ky., is attracting a horde of visitors. Four petrified bodies have been found, wrapped in the remains of what appears to have been some kind of cloth. Over 500 people visited the cavern Sunday.

It is this type of feral petrified corpse that we find in this story from Warren County, Ohio. I’ve gotten rather fixated on Dr Beachcombing’s post about Death by Oak, having recently written about a ghost in a hollow tree, but there is always room for another story in the same horrifyingly claustrophobic genre, especially with the addition of petrified bodies.

Thought to Have Been Victims of the Indians.

Lebanon, O., March 30. John L. Burrows, a farmer living seven miles south of here, tells a hair raising story of a grewsome find in a tree on his place. He says that he discovered two petrified bodies in a tree trunk. They were bound with thongs of leather. Farmer Burrows thinks that the two were victims of the Indians.

The story of Burrows’ find is in substance as follows.

Burrows owns a large farm and in clearing off a portion of it he came across the trunk of a large tree. The trunk had been in the ground for years, evidently, and in dragging it off the land Burrows says he discovered the figures of a man and woman, petrified and imbedded in the trunk.

The two figures were as hard as stone, and were thoroughly preserved, while the decaying wood of the tree covered them and only the vigorous efforts used in dragging away the fallen oak, which broke off portions, revealed the two objects.

How long they had been imbedded in the trunk it is impossible to judge. They were bound together with thongs, and the only solution that has been reached is that the two were caught by the Indians years ago and lashed to the tree, which presumably had been only a fractional part of its present size.

Whether they were killed cannot be determined, but it is presumed that as the tree continued to increase in size the bodies of the man and woman were gradually covered by the wood.

No article of clothing remains with the exception of a few leather bits which were found after the farmers had cut away portions of the tree in search of further objects.

The case is a very strange one, and nothing can be made of it by the local sages.

Various solutions have been suggested, but the binding thongs and the fact that the two figures were tied to each other gives strength to the theory that the two were pioneers who met a horrible death at the hands of the Indians.

The figures are in possession of Farmer Burrows, whose house is besieged constantly by the curious wishing to see the strange figures.

Investigation on the part of the fingers revealed that the figures had completely become solidified and that the state of petrifaction was complete. The figures are in a standing position, back to back, with the woman’s head leaning across the shoulder of the man. The woman is about five feet four inches in hight, [sic] while the man was evidently not large, as he overtops the other figure by only a few inches.

If this wasn’t a case of going one better than the Cardiff Giant, perhaps a more logical explanation was that the bodies were put inside the tree, the corpses naturally mummifying inside the trunk, rather than the tree grew around them.

But there’s the teensy snag that I can’t find Burrows in the census or grave reports and would leather thongs really survive for decades, even inside a tree trunk? Then there’s the date–just before April 1….

1902 was far removed from the days when the Shawnee roamed the Ohio territories, yet we still see the casual racism too often displayed towards “savages” who were deemed capable of any sort of atrocity.

If the corpses had been discovered in England or Europe, they would have been given what I have heard described as the “two-penny coloured ‘walled up’ alive business.” with a lurid story about an adulterous wife and her lover or a monk and a nun who violated their vows of chastity being tied together and walled up alive. I consider that the Plain Dealer journalist missed out on a golden opportunity.

Does anyone have any more information on Burrows and his petrified corpses? Let he/she who is without sin, cast the first stone corpse at chriswoodyard8 AT gmail.com.

Coincidentally, about 30 miles from Lebanon, in the Clinton County town of Sabina, the embalmed corpse of  an unknown man dubbed Eugene was a prime tourist attraction for many years.