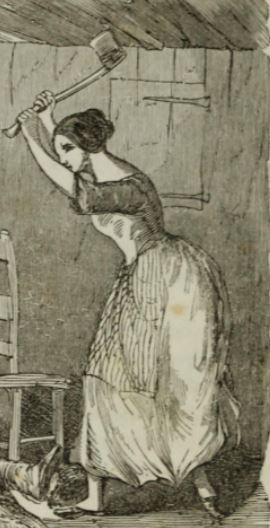 The following story is told by Chedo Miyatovich, [Čedomilj Mijatović] former Serbian Minister to the Court of St. James. He prefaces the tale with this note:

Two instances of a Hungarian magician may be cited as proofs of the efficacy of modem magic. Both of these are to me very conclusive, coming as they do from the lips of my mother, who, when a child of six years, was kidnapped by an old Wallachian woman — the magician who is referred to in the two examples I purpose giving. The old woman resided in Arad, a town in South-Eastern Hungary, and for six years my mother served her as her apprentice, being discovered by her family and taken back home when she was twelve. As a youth of sixteen I remember my mother telling me wonderful stories of her life and experiences while with the old magician, and the two that most impressed me arc those I am about to recite. [My note: I’m omitting the first one, which has to do with calling a far-away lover back.]

A lady of a neighbouring town having been left a widow, had taken as her second husband, a doctor. She had a daughter by her first husband, and as, up to the time that this young lady had reached the age of twenty-five, no suitor for her hand had appeared, despite her undoubted prettiness and not inconsiderable dowry, her mother grew alarmed lest she should be doomed to spinsterhood. Wherefore, she one day took her daughter to the magician to see if the old woman could tell her what was to be her child’s fate.
Sitting as usual before the large fire in her kitchen, the magician heard the woman’s story, and then threw a few white haricot beans on to the earthen floor. For a while she sat staring at the beans, absorbed in what she saw, and oblivious to the presence of her visitors, who sat and waited in suspense. Presently the old woman spoke—
“Yes,” she said to the mother, “ your daughter will be married, but at present there is an impediment—a woman.”
“Could not your magic remove that impediment?” asked the lady.
“Of course it could,” replied the magician confidently, and after the professional question of terms had been settled, the party went into the garden, the young apprentice [the author’s mother] carrying a large axe. The old woman led them to a slender-stemmed peach-tree in full bloom, took the lady’s daughter by the right hand, and walked with her three times round the tree, the while muttering some magic formula. This done, she gave the young girl the axe, told her to strike a hard blow at the stem, at the same time pronouncing the words—
“I strike at the hindrance to my marriage, that it may be removed.”
The girl did as directed, was then told that she must do the same thing every Friday until the tree was on the point of falling down. For three Fridays, therefore, the young woman and her mother went to the magician’s house, and carried out the instructions, and in due course the peach-tree fell to the ground. When this happened the old woman said to the mother—
“Now you may sleep without anxiety, for your daughter will be married within a year.”
On that very day, the girl’s mother was taken ill while driving home, and in three days she was dead. In less than a year her daughter was married— to the doctor, her step-father.

Folklore connects trees with human souls, as in the planting of trees at the birth of a child and the dire consequences for the child if the tree dies. There is also a belief that if one puts a lock of hair from a corpse into a hole in a tree, the spirit of the dead will enter the tree and not haunt the living. Trees associated with specific individuals can die at the same time as their human counterpart.

“Morhart’s great-grandmother Roth lived in the house with them. She loved the garden and, especially, a beautiful evergreen tree. A neighbor remarked to Morhart’s grandmother, ‘Ani [great-grandmother] loves that tree so much that I am afraid to think what will happen to that tree when she cannot see it anymore.’ Grandmother Dischinger thought this was a strange thing to say. But Ani died and several weeks later, the neighbors noticed that some of the beautiful evergreen’s branches were turning yellow. They were lopped off, but one after another the branches turned yellow and within a few months the tree was dead. The neighbor next door told Grandmother Dischinger, ‘I was afraid of that. She took it with her. That has been done before.’” The Zoar Story, Hilda Morhart Dischinger p. 43-4

On the day of the surrender of Napoleon III after the battle of Sedan a frightful storm broke over Windsor, and during the tempest a tree which the Emperor had planted in the park, while he and the Empress Eugenie were visiting Queen Victoria in 1855, was struck by lightning. Still half the stricken tree remained standing, but on the first of June, 1879, a similar terrific storm again swept over the park and a further lightning stroke completed the destruction of the tree. On this date [Napoleon III’s son] the Prince Imperial was killed in action in Zululand. Haunted Royalties, Katherine Cox

It appears that the magician’s spell was designed to “attach” the girl’s mother to the peach tree as a surrogate psychic-murder victim. So much tidier than actually axing the mother or explaining the exotic poisons in the victim’s tissues to the police. Which, of course, raises the question:  was something deadly added to the mother’s refreshments during those three Friday visits?

Mijatović was a well-respected diplomat with a deep interest in the occult. He attended an seance on 20 March 1903, with W.T. Stead and a number of other witnesses at which the assassination of King Alexander and Queen Draga of Serbia—which took place on 11 June 1903— was described in detail.

Other instances of Hungarian magic?  chriswoodyard8 AT gmail.com