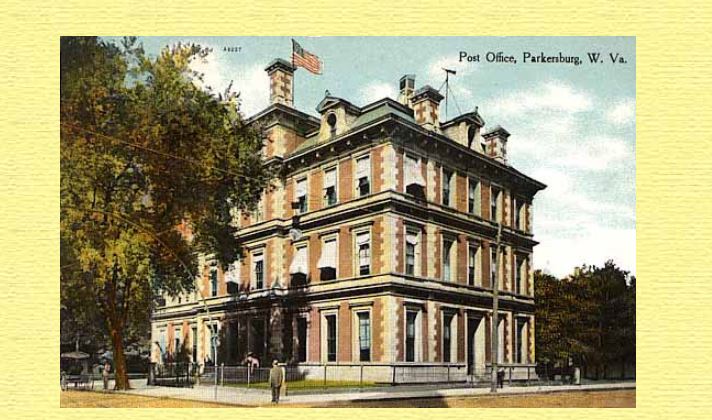 The Phantom Postman of Parkersburg. The Parkersburg customs house and post office, 1900 http://www.electricearl.com/parkersburg/PO2.html

On this day in 1775, the United States Postal Service was established by the Second Continental Congress. I’m too busy to bake a cake, but I can’t think of a more appropriate way to commemorate the  institution that ensures that we reliably get our neighbor’s insurance bills than with a phantom mail-sorter.

I’ve written before on “lightning daguerreotypes” — those mysterious faces that materialized on glass. This account from Parkersburg, West Virginia, is a trifle ambiguous as to whether the apparition is an image in the glass or a moving spectral mail-sorter seen through the window.

A Mysterious Figure Clearly Outlined on the Windows, but No One Can Account for It.

Special Telegram to the Sunday Register.

Parkersburg, W.Va., May 17. The phantom letter distributor in the custom house is one of the features and to many people an inexplicable mystery. On the southern end of the building through the second window on the first floor on bright mornings and moonlight evenings and nights, the form and features of a big, portly, middle aged man with sleeves rolled up can be clearly defined in form and feature through the window. His arms and body seem as clearly defined if but a few feet away. The necktie and even the elastic which support his sleeves are plainly seen, and the man appears to be carefully scanning a bundle of letters, which can be seen in his hands. The phantom has been seen for several years, but the owners of the property from which it is seen have had a delicacy in saying anything about it, as the revelation would necessarily involve considerable annoyance, but within the past few days the matter has been revived to such an extent that even the postmaster himself has taken an interest in it. Wheeling [WV] Register 18 May 1890: p. 1

A later syndicated squib about the postman joked: “Hundreds have seen it, and among the superstitious it has created alarm. It reads the postal cards.” The Atchison [KS] Daily Champion 1 July 1890: p. 2

This account tells of the best site to view the figure and, again, is ambiguous about whether it is a shadow or illusion.

Parkersburg, W. Va., May 6. A strange shadow or refractory illusion has for some time been shown from the window in the southwest aspect of the Custom House night and morning, and frequently during the day, through the windows referred to, can be seen the form and features from the eyes down, of a middle-aged person, apparently in the act of distributing mail-matter. He stands with his sleeves rolled up, with rubber supports, to all intents and purposes distributing mail. The family residence adjoining is a good point of view; in fact, the view is so good and the illusion so perfect that several servants have fled, preferring to seek another place before facing the “ghost of the mail-carrier.” The former postmaster was made aware of the peculiar shape shown through his windows, and he had them thoroughly cleaned and scoured, but the vision still remained and is there to-day. The resemblance is perfect and always the same to everyone who sees it. The Hickman [KY] Courier 9 May 1890: p. 2

Here we see a frequent theme in various faces-in-the-window cases: that washing or scouring the windows not only does not remove the window-pane ghost, but enhances it. And, like so many other stories of window phantoms, there is no follow-up and no resolution. Adding insult to historical injury, the post-office/customs house building was torn down in the 1960s to make way for a new Federal building.

Any other stories of the “phantom postman,” perhaps in the new building? Postcards with spicy details worth reading, please, to   chriswoodyard8 AT gmail.com

Mary in NE Ohio writes with a question I should have answered:

I enjoyed your story of the Parkersburg PO apparition, but found myself wondering why Parkersburg needed a Customs House.  When that area was raw frontier, West Virginia did not exist as a state. Was a “Customs House” something every town aspired to ?

Thanks for the question, Mary! The Customs House was for regulating commercial traffic on the Ohio River and collecting duty on imported goods shipped on that river. There were Customs Houses on the Mississippi that served the same function.