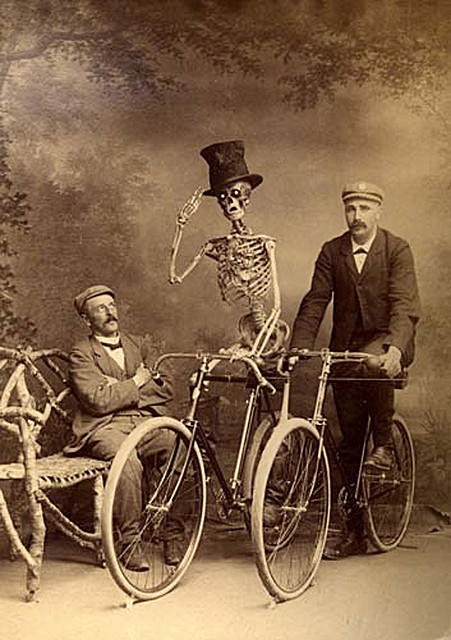 Since we are nothing if not topical here, I thought I ought to do something in honor of the Olympics. Even thought it is an Olympic sport, I find watching cycling a tedious pastime, frequently dropping into a coma easily mistaken for death while viewing the surging masses of spandex. But devotees are fanatical about the sport. In this astonishing story, one man crossed the finish line as a corpse.

Victor in an Australian Contest Goes Under the Tape a Winner.

Vancouver, B.C., Feb. 25. Australian advices by the steamship Miowera tell of a remarkable bicycle race in Sydney, which was won by a dead man.

It occurred at a big electric light carnival. In a one-mile race there were 50 entries, some of the fastest men in Australia taking part in it. While 10,000 people watched this particular race, which was for a magnificent cup, young James Somerville passed under the tape a winner, though dead.

At the start he quickly forged ahead, closely followed by another crack rider named Percy Cliff. They left 48 riders away in the rear and shot around the track almost wheel to wheel. When within 25 yards of the tape Somerville, who still led by half a wheel, was seen to relax his hold on the handlebars. His pedals whirled around, however, and he pluckily held his position. Five yards from the tape Cliff put on a tremendous spurt and struck Somerville’s hind wheel, shooting the machine with its then almost inanimate burden, like a rocket under the tape.

The crowd yelled wildly, but silence ensued when Somerville, after crossing the tape, plunged head foremost from the machine. When picked up he was dead. Physicians who examined his body said he must have had an attack of heart failure on the last lap. Jackson [MI] Citizen Patriot 25 February 1899: p. 1

A thrilling narrative, indeed!  But who was this plucky post-mortem winner?

The friends of the above-named well-known cyclist will regret to learn that he died in Sydney Hospital at about six o’clock this evening. It may be remembered that at the electric light bicycle race held on the Sydney Cricket Ground on Thursday last deceased fell while riding for the Trustees’ Gift and sustained fracture of the skull. He was taken to the hospital and at first, according to the newspaper reports, hopes were entertained that he would recover; but these proved illusive and he never regained consciousness, but died as stated above.

Deceased was a very respectable, well-conducted young man, much liked by those who knew him. He was second son of Mr. J. Somerville of Yarra, and until recently he assisted his father and brothers in carrying on farming. Lately however he became enamoured of cycling and devoted much attention to it. In his career as a cyclist he was fairly successful, having last year won two races at Braidwood and one at Cootamundra, and about four months ago he was first in a local road race from Tarago to Goalburn.

He was single and leaves a father, mother, and three brothers to mourn their loss.

The body will be brought to Goulburn by mail train to-morrow morning, and the funeral will leave Mr. Wiseman’s Auburn-street, at five pm., for the Presbyterian cemetery, North Goulburn. Cyclists are by advertisement requested to attend. Goulburn Herald [NSW] 23 January 1899: p. 3

An inquest was held a few days later, giving an affecting description of his funeral and some unexpected details.

The Inquest on Somerville.

The inquest was on Tuesday resumed on the body of James Somerville, the Goulburn cyclist, who was fatally injured whilst riding in a race at the electric light cycling carnival at the Sydney Cricket Ground on Thursday night. A number of witnesses were called to show that the ground was well lighted during the progress of the race in question, and the track was in good order. Senior-constable Pearse, who was stationed within the enclosure, stated that the riders were in a bunch until within 150 yards of the wining post, when they spread out. He saw two men fall near the fence, and went to their assistance. In the casualty room he asked deceased how it happened, and he replied, “I know nothing about it.” Joseph Cliff, cycle mechanic, Waterloo, who fell with Somerville, said that in the rush for the finish he was three yards behind him, and another man was an equal distance ahead. He saw him suddenly fall, but did not notice the machine strike the fence. Henry Johnston, who was a spectator of the race in the public reserve, stated that he saw deceased fall a few feet away from where he was leaning over the fence. In falling deceased struck witness on the arm. He thought Somerville’s machine must have struck the back wheel of a bicycle in front of him. Fred Rathgen, who was present at the carnival in the capacity of referee, said that he was standing close to the scene of the fall. Deceased was on the outside of the bunch, and nearest the fence. The front wheel of his bicycle must have struck another bicycle, as it turned it completely round, and brought the machine to a standstill, throwing deceased off. He struck the track with his head, and lay there bleeding and motionless. The jury, without retiring, found that death resulted from injuries accidentally received. The funeral took place in Goulburn on Tuesday afternoon. A large number of cyclists took part, walking in procession in front of the hearse in couples, with their bicycles on the inner side. Before the cemetery was reached the wheelmen numbered over seventy, and the procession had a very imposing effect. Following the hearse were the mourning coaches, a large number of other vehicles, and horsemen. The hearse was draped in the riding colours of the deceased. The remains were interred in the Presbyterian cemetery. The Rev. Stanley Best, assistant minister of St. Saviour’s Cathedral parish, officiated at the grave, and in the course of a brief address said that it was a beautiful sight to see so many of the deceased’s fellow cyclists attending the funeral. Handsome wreaths had been sent by the local and metropolitan branches of the League of Wheelmen and by the promoters of the electric light cycle meetings. Mr. R. Sidney Craig conducted the obsequies. General sorrow is expressed at the untimely end of so promising a young man. Goulburn Evening Penny Post [NSW] 26 January 1899: p. 4

Wait—he spoke? He was injured on Thursday and died on Friday? But what about the exciting narrative of young Somerville crossing the finish line as the winner, lifted off his bicycle a corpse?

Alas, for the world of strange deaths, this fanciful tale had more revolutions than a peloton.

Usually a tragic event needs to fade at least slightly into the mists of history before becoming distorted, but Somerville—the man, the myth, the legend—began his victory lap almost immediately.

He died on the 23 of January 1899 and a month later, the story heading this post appeared in the Michigan paper. In April, not even three months after the tragedy, the local paper was commenting on the far-flung variants of the story and even they had their facts wrong with “died some days after.”

It has often been a puzzle to understand where English journals get their Australian news from. Some of it is fearfully and wonderfully mangled during the process of transposition form the columns of the Australian to those of the English press. He is a paragraph in point, taken from the “British Weekly,” one of the most respectable of English religious weeklies, which has a large circulation in these colonies:

A bicycle race was won by a dead man at Sydney a few days ago. When James Somerville, a champion Australian bicyclist, was within 25 yards of the winning post, he released his hold of the handles, and his head dropped forward, but he apparently continued to work the pedals, and came in the winner. He was lifted from his bicycle, and was found to be dead. The doctors said he died during the last lap.” The facts of the unfortunate case, it will be remembered, are that James Somerville was thrown from his machine while racing on the Sydney Cricket Ground, and died some days after from the injuries received. Goulburn Evening Penny Post [NSW] 8 April 1899: p. 4

This story whirled round the world nearly as fast as the bicycle of the unfortunate Somerville. In a discussion of long-distance cycle racing the tale was commented upon with an even stranger assertion about the story having its origins in a fictional yarn in a cycling magazine.

Thus an English contemporary: Those of us who’ve done long distances know that it is quite possible to drop into a semi-sleep and yet keep on pedalling. But it is news that a man may be dead and yet ride a bicycle.

The latest tall tale arrives from Australia. A telegram tells how James Somerville, a champion rider, came to his death suddenly. It was during a race, when within 25 yards of the winning post, he released his hold of the handles and his head dropped forward. But he worked the pedals for all he was worth, and came in the winner. He was dead; the doctors said he died in the last lap. Who was James Somerville, anyhow? A “prize tale” in a cycling contemporary a few months ago had this incident as its foundation, and the name of the hero thereof was James Somerville The Ballarat Star [Vic.] 6 May 1899: p. 6

Much in the same way that some continue to insist that Victorians photographed their dead standing, held miraculously upright by a mere posing stand, this story had wheels, running on for years after Somerville’s death. What is strangest of all is to find the dead-man-winning tale repeated in Australian papers in 1899, where, you would think, the actual story might have been known.

One of the latest versions was published in 1925. The story was freshened by a preface reading, “It is not long since a valuable cup was won in a bicycle race at Sydney by a man who was actually dead when his bicycle flashed past the winning post.” [Dallas [TX] Morning News 9 August 1925: p. 1] The story was also repeated as true in the Evening Star (Washington DC) 27 February 1949: p. 56 in one of those features about “quaint stories from the past.” Even today you can find dozens of sites where James Somerville’s post-mortem victory is celebrated. Lore, we must admit, is stronger than death.

Was there actually a fictional story in a cycling magazine where this legend got its start? Or is that just another part of the Somerville legend? No valuable cup for guessing. chriswoodyard8 AT gmail.com

See this story from The Ghost Wore Black: Ghastly Tales from the Past, at Mrs Daffodil’s blog. It is dated 1892; could it have been the inspiration for the cycling dead man?

Undine of Strange Company writes in with a chilling parallel from the world of horse racing. Thanks, Undine!

Your post about “Dead Man Cycling” reminded me of this memorable finish from the world of horse racing. (Lewiston Sun, June 5, 1923) 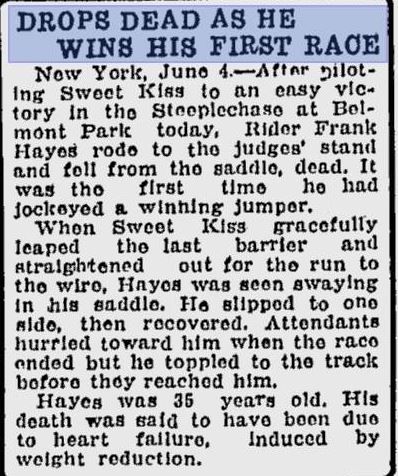