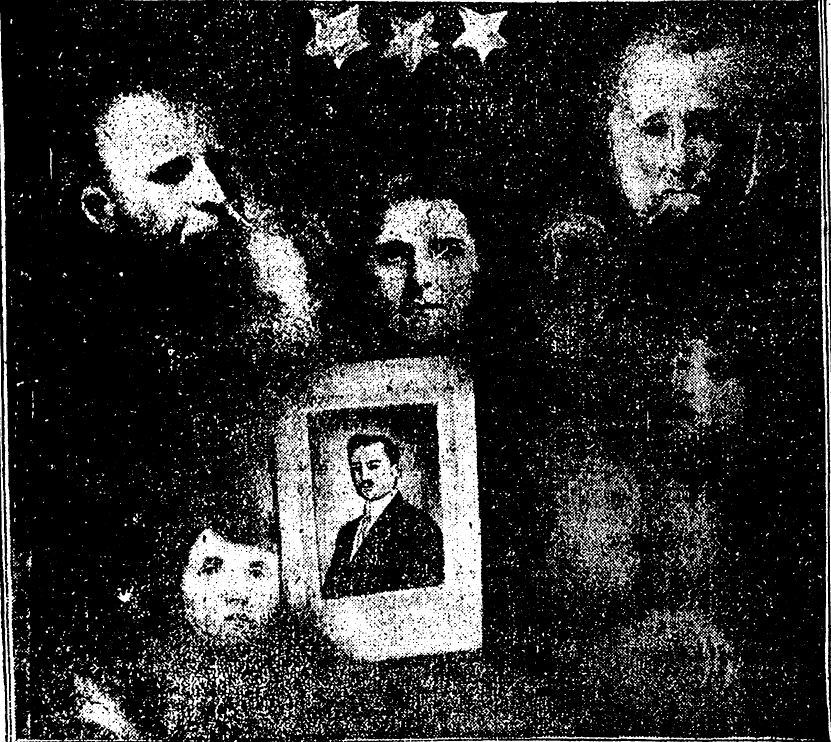 The photo above is an unexceptional specimen of the usual grainy, blurry “spirit photo” so characteristic of that genre.  The photograph’s creator, the Rev. Dr. Richard R. Schleusner, ministered to the Church of Modern Spiritualism, an institution with a name that simply begged for treatment by Sinclair Lewis.

The article accompanying the photograph laid out an ambitious program for the Church, which, I assumed from the mocking tone, was merely your usual shabby Spiritualist organization, as pedestrian an affair as Schleusner’s spirit photo, run by a fraud with delusions of grandeur.

New York, March 17. Those cubist and futurist artists who can make a picture of a lady without raiment coming downstairs so that the finished product looks like the front door of an olive importer’s establishment after the explosion of a dynamite bomb have nothing on the Rev. Richard R. Schleusner, pastor of the Church of Modern Spiritualism, of 138 East Twenty-seventh street. The reverend doctor has produced some photographs of spirits that are wonders.

They open up a style of photography that the world has never known up to this era and offer wonderful possibilities. The doctor is trying to establish his temple and seeks a small matter of $300,000 as a fund for building. His concern is incorporated under the laws of New York, with K. Marx [Mrs. I. Marx] and R. Demuth as fellow incorporators, for the making of scientific and religious research and the other like purposes that always appear in religious and charitable charters.

TWELVE FACES IN THE PICTURE.

But the pictures are the striking developments of his cult. The doctor told about them today. He produced two specimens. One of them was large bromide print, for all the world like the crude, material output of the ordinary newspaper photograph room after the enlargement of a picture from a plain negative. But in the picture, with the focus good in each case, appeared twelve faces. Several of them stood out in strong relief, with the features all in the right places and the lines good. In the corner was a photograph of the doctor. Over the whole lot appeared three stars.

“I was sitting in my Psychic Room,” said the doctor, “thinking about a picture of myself that stood before me. I had a small camera in my hand and the room was absolutely dark. I snapped the bulb of the camera and when the plate was developed the picture appeared on the negative. There were the faces you see.

“The face at the top of the left hand side is that of a lawyer I knew thirty years ago. He has passed over the line and he has been one of my main guiding influences in many matters. The woman next to him is my mother. I do not know who the other persons are.

“The three stars, at the top of the picture are my lucky lights.”

The doctor produced a second picture of himself, taken, he said, in the dark. Behind his own counterfeit presentment was that of a woman. The light for the pictures came from the radiance of the woman’s spirit.

SIT IN THE DARK WITH CAMERA.

The doctor says that he is able to photograph spirits at will. All the person who wants a view of the spirits that possess him has to do is to sit in a dark room and the camera does the rest. The light for the whole performance is supplied by the spiritual calcium carbide that is carried around by every well-regulated dweller in the higher realm of after light. Denver [CO] Post 17 March 1913: p. 2

All fairly commonplace spiritualist stuff. Nothing to see here except stars that look like kindergarten craft cut-outs, and that crack about “spiritual calcium carbide.”  But, as we see in the next story, the good doctor was a go-ahead sort of person, interested not only in spiritual advancement, but in the most up-to-date technology for talking with the dead.

Psychical Sharps Claim Wireless Messages Are Surrounded by Spirits by the Hundreds.

(Written for the United Press.)

New York, April 7. Communication with the spirit world by means of a wireless telegraph apparatus is the latest sensation reported in New York psychical circles. Within the last few days a complete wireless station has been installed in the Temple of Modern Spiritualism, and, according to its pastor, the Rev. Dr. Richard R. Schleusner, regular messages have been transmitted to and received from “those on the other side.”

Dr. Schleusner and others connected with the temple explain that the sending apparatus is operated by a weakened current to prevent its messages from being picked up by the regular wireless stations around the city. But the spirit operators are so sensitive to the wireless waves that they can read the faintest messages sent out and their responses, while feeble, are entirely intelligible to the receiving operator at the terrestrial end of the wireless.

At first, it is said, there was no response to messages sent out from the church. This was explained by the fact that the spirits had not “practiced” the code and could not read the messages as well as they could send them—an explanation that would appear reasonable to anyone who has practiced ordinary Morse telegraphy. But, owing to their keener faculties, the spirits quickly became expert in sending both Morse and Continental codes.

“We operate our station by placing one or more of our mediums beside the telegraph operator,” explained one of the officials of the temple. The medium attracts the spirits or controls, as we call them, within the radius of our wireless current.

‘When the medium has established the proximity of a control, a message is given the operator and he sends it in the ordinary manner. Almost instantly the reply comes and conversation between the medium and the controls continue without interruption for several minutes. Then the communication becomes confused by the efforts of other controls trying to transmit messages of their own, and the station has to shut down for a while, until the spirits stop crowding around”

Dr. Schleusner said the temple must not be confused with the fakirs that have brought discredit upon spiritualism. He said his organization is doing everything it can to promote the scientific advancement of his faith. Daily Capital Journal [Salem, OR] 7 April 1913: p. 1

The temple, located at 138 E. 27th Street, New York, at the former site of Welsh Baptist Church, seated 600 people and claimed an extraordinary 4,000 members. The “Psychic Room,” mentioned in the photography article, was a séance room meant for research and demonstrations of psychic power.

Dr. Schleusner explained that “while the old time spiritualism was accused by its enemies of using electricity and scientific apparatus in order to fool the public, modern spiritualism openly calls all such aids to its service…

The psychic room is furnished with somber colored curtains, draperies, chairs, wall papers and rugs. Here the investigating committee meets and experiment. At one end is a cabinet hung in black and electrically lighted with a rose hued incandescent bulb.

A central object is a large trumpet enclosed in a frame of magnetic coils, through which spirit voices are said to have been heard. There are about the room many tubes and bulbs, crystal balls and apparatus for producing X-rays. A new model of the old fashioned planchette is constructed in such a way that there is no opportunity for even unconscious trickery, for the slightest push by the hand will tip it up and render it useless. There are several cameras by which spirit faces are said to have been taken. One photograph shows a face outlined in wet clay, another Dr. Schleusner himself standing in a group of shadowy visitors from the other world presumably.

That spirit voices communicate by means of vibratory currents is one of the theories of modern spiritualism. The Sun [New York, NY] 4 May 1913: p. 6

To keep its spirit communication shipshape, the church hired “William Russell, formerly connected with the wireless bureau of the United States Navy” to take charge of the spiritual telegraph. [Bell Telephone News 1913]

1913 seemed to be a banner year for the temple; multiple articles were syndicated all over the country. It was announced that a site had been decided on in Central Park West for the new temple and that $50,000 had already been subscribed. It all sounded very grand and flourishing. The losses of the Great War brought new life to spiritualism, presaging a prosperous future for the Temple. Yet, beyond 1913 there are only a few stories in the mainstream press and none in the spiritualist databases, about mediums doing test séances at the Temple. Then—silence. 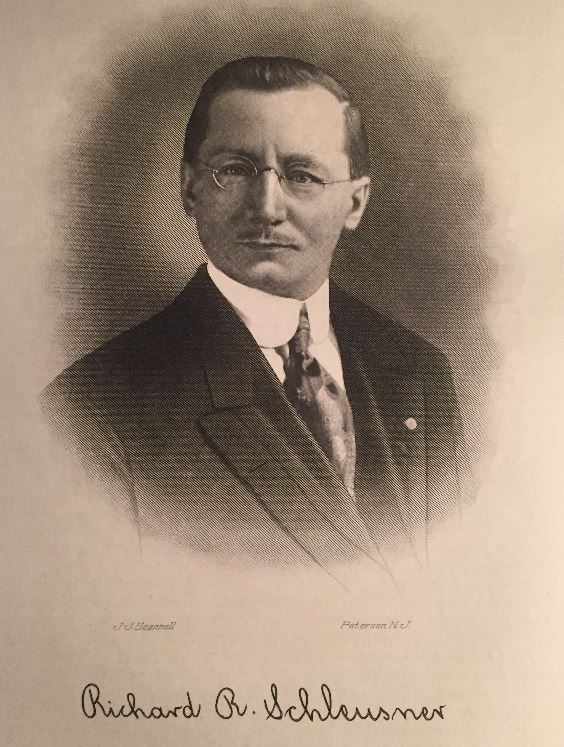 The last I found of Dr. Schleusner  was a reference to his position as Grand Master of the New Jersey Grand Lodge in 1928. He is buried in Laurel Grove Memorial Park, Totowa, New Jersey. The death date on his grave marker is obscured by foliage.

What happened to The Temple/Church of Modern Spiritualism and the property in Central Park West? Did Dr. Schleusner return to his own Temple’s Psychic Room for special post-mortem appearances in grainy, blurry photographs or to offer proof of the truths of Spiritualism on the wireless?  chriswoodyard8 AT gmail.com