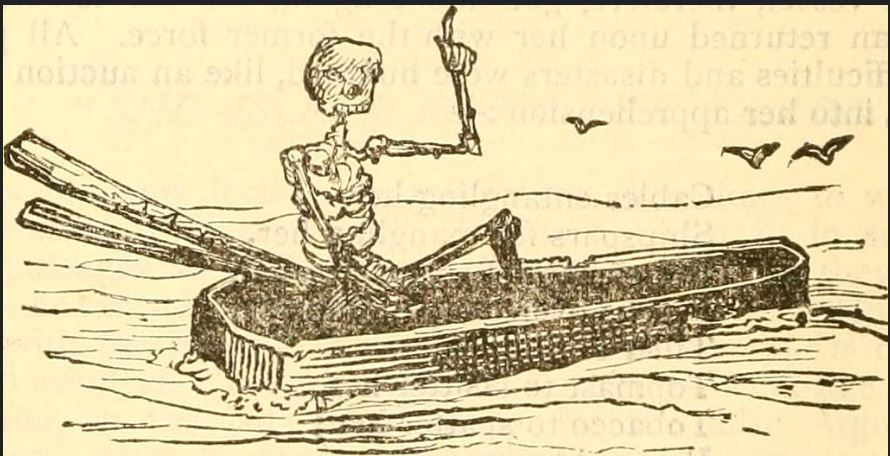 The “Revue des Sciences Psychologiques” tells the following story. The thing occurred at Sfax in Tunis, soon after its capture by the French [July 15-16, 1881]; the narrator is a certain “M. J.”

Just after the taking of Sfax, the heat being very great and the people of Sfax being so preoccupied by the recent events that they were neglecting their fishing as well as everything else, so making the Mediterranean for the moment a shipless sea, it occurred to “M. J.” and a friend to go out into the open and bathe. For this purpose they took an Arab boat, but finding no oars, they appear to have taken the handles off a stretcher, used for carrying the corpses of the Arabs killed during the recent bombardment, and to have somehow manufactured a pair of temporary oars.

About a quarter of a mile from the shore an Arab sloop lay at anchor. This vessel was quite isolated and deserted. The two friends fastened their boat to the sloop, got on board and undressed, and jumped into the water. “M. J.” then says:—

“After having made about a hundred strokes my friend cried out:—

‘What are you throwing stones at me for?’

‘What are you talking about? Where do you suppose I am to get stones?’

‘But someone is throwing stones at us!’’

‘Where are the stones?’

‘Look, one is just falling, and others are coming!’

‘You are off your head; I see nothing of the kind!’

‘Look, there’s another; let us get out of this.’

Seeing my friend was frightened we went back to the sloop, he all the time seeing stones fall about him, while I saw nothing.”

When they got back to the vessel they found their boat full of water and just ready to sink. They hunted all over the sloop, but there was no one there, and on the calm sea no sign of humanity was visible. They emptied the boat with their hats, but failed to find any leak,

“Having dressed ourselves, I began to loose the boat from the sloop. Our astonishment may be guessed when we found, instead of the cord we had used, a great rope tied in a sailor’s knot, tightened up just as if it has been there for months. We could not undo it, and began to be alarmed at the abnormal state of things. I had not seen the stones, but I know I cut through that knot with my knife. As soon as this operation was over, we were about starting, when we found that the boat was fastened to the sea bottom by another rope an inch thick. I cut this second cord, and at last we were free.”

It is, perhaps, not to be wondered that, that when the companions got near the shore, they jumped off that uncanny boat, and ran for their lives.

What do we make of this curious tale? Rock showers or stone-throwing poltergeists, depending on how you interpret the phenomenon, are a cliché of the paranormal genre. I’ve almost stopped collecting these stories unless they have some unique feature. However, the common element of nearly all stone showers  is that they occur on land.  I’ve been searching for a case I recall of a sailing ship being showered with stones, with no success. Still, I think I’m correct in saying that sea-going stone showers are exceptionally rare. These stones fall into the even rarer class of phantom falls or possibly into the utterly mythic category of “illusory lithobolia appearing to a single polt vector.”  The readers of Light would probably have suggested that the witness who saw the falling stones was a medium unaware.

The story is ambiguously titled “The Haunted Ship.” Is that the row-boat or the abandoned sloop, prototype of Ghost Ship and its horror-movie ilk? (“Don’t open that hatch!”) There are hints of djinn-ery: stones visible to only one hysterical witness; an undamaged boat full of water; the immense sailor’s knot and the rope attached to the sea floor (was there an anchor?). These could point to angry spirits or even angrier Tunisians hiding on or around the sloop. It seems unlikely that the calm sea filled the boat to sinking point. But using oars made from corpse-carrying stretchers was probably not the wisest choice.

Thoughts on the haunted ship? Parallel cases? Shower me with your wisdom. chriswoodyard8 AT gmail.com