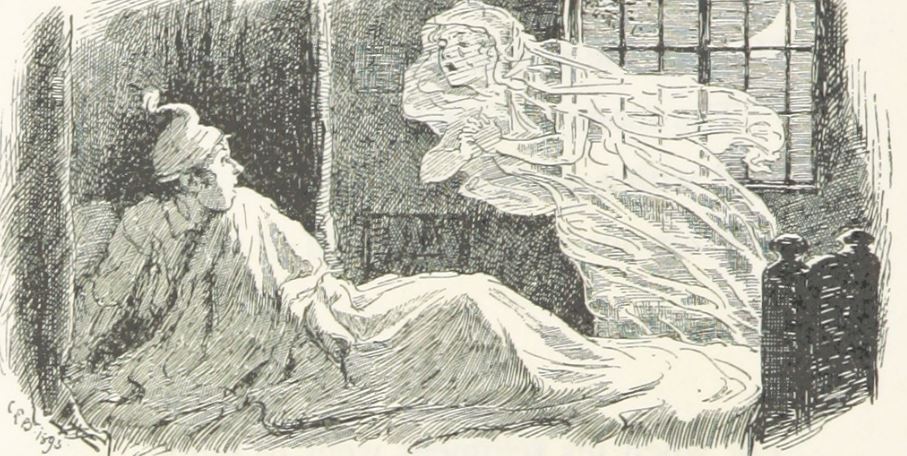 As a connoisseur of Tokens of Death, I’m always intrigued by the outliers, particularly the aural omens of doom. In this example, from the Isle of Skye, we find a case of what amounts, if not to “Second Sight,” then to what we might call “Second Sound.”

“Don’t be alarmed,” [the narrator] commenced, “when I tell you that the story I am about to relate is told in connection with the cottages, situated on the banks of the river, flowing past Rhundunan. It is, as you know, generally occupied by shepherds, who return from their work on the mountains too late in the evening for them to reach their own homes. Well, one of these men had slept there two or three nights in succession, and I was a good deal annoyed by hearing from a servant that he had been telling some idle tale in connection with an apparition seen by him whilst sleeping there. I at once sent for him, and expressed my regret that he should have done so; upon which the poor man replied, with a face of consternation, ‘Indeed, ma’am, I am very sorry that you should be vexed with me, but, were it to cost me my situation, I cannot sleep any longer in that house after what I have seen!’

“And what have you seen ?” I asked, impressed, in spite of myself, by the shepherd’s serious manner.

“‘You may laugh at me,’ he said, for what I am about to tell you, but it is as true as if every word I utter were to be my last. During the past three nights, the figure of a woman dripping wet, has taken her stand by my bedside. She had her handkerchief tied round her head, and her arms folded over her breast. After gazing on me for a little while, she kissed my forehead, and then went across the room and stood by the fire-place, keeping her eyes fixed upon me with a melancholy look until she vanished.’

“I vainly endeavoured to persuade the man that he had either been dreaming, or that some one had played a trick upon him; he seemed firmly convinced that what he had seen was a supernatural appearance.

“Perceiving him to be the prey of an unreasoning terror, I gave him leave to change his sleeping quarters.

“A few days afterward, while I was with one of my domestics, getting linen out of the closet in my room, suddenly there was a report as if a pistol had gone off in the press whence we had taken it.

“‘Oh, ma’am!’ exclaimed the maid, with a face of horror, ‘ there will be grave-clothes taken from that chest before this week is over.’ I laughed at the woman’s fears, and proceeded with my occupation.

“The next day, having some business to transact at Portree, I sent this identical servant, who, being a clever, active person, and an excellent walker, I thought best suited for a message of the kind. Portree being distant thirty miles, I allowed her three days for the journey [!!], expecting her back on the evening of the third day from that on which she started. It rained incessantly during the woman’s absence, and the river she had to cross, which flows at the foot of the park, was unusually wide and rapid. I felt rather uneasy when the night she had fixed for her return had passed over without our seeing anything of her; but I calmed my fears, hoping she had been detained at Portree on account of the weather, and that the morrow would bring her back in safety. The next day passed in like manner, bringing no tidings of the absent female.

Seriously alarmed, we issued forth in a body to search the river, in case she might have arrived at the ford after dark, and not perceiving the increased size of the water, have possibly been drowned in attempting to cross. Our fears, alas! proved to have been too well founded. The corpse of the unfortunate woman was discovered a short way below where the ford was situated. She had, as we conjectured, missed her footing in attempting to cross, and had perished ‘mid the darkness and the storm of that dreadful night.

“The strangest part of the tale remains to be told. The arms of the servant when found were crossed upon her breast; she had bound her head round with a handkerchief, in order, as we supposed, to protect herself in some measure from the rain; and the body was carried into the previously mentioned cottage; whilst the bed was removed and placed beside the fire-place, that being a more convenient position.

“In this manner the shepherd’s tale met with this singular realisation. It only remains for me to add, he had been a personal friend of the deceased; also, that the grave-clothes in which the unfortunate woman was interred, were taken from the closet in which the report of the pistol was heard, and that within the week, as she herself had predicted.”

Ghostly gunshots are one of the rarer tokens of death. In fact, I’ve found only one other example in the Spiritualist literature:

About three years ago I was at Schroon Lake, New York, and one evening retired early. About half-past ten o’clock I heard a noise like the report of a gun, and, looking up, I saw my sister in an arbor of flowers, beckoning to me. I felt she had passed away, and had come to me while I was asleep. The next morning I received a telegram, stating she had passed away the day before. Facts Devoted to the Statements of Mental and Spiritual Phenomena June 1885: pp. 92-93

The sound of a gun is also often reported in “exploding head syndrome” and, in one case, by a man in a fugue state, as he came out of a two-year episode of amnesia. I’ve also written about a ghostly stalker who haunted a woman with the sound of phantom gunshots.

Other reports of the report of a gun in a paranormal context, perhaps in religious visions or UFO encounters? Shoot me a line at chriswoodyard8 AT gmail.com

Chris Woodyard is the author of The Victorian Book of the Dead, The Ghost Wore Black, The Headless Horror, The Face in the Window, and the 7-volume Haunted Ohio series. She is also the chronicler of the adventures of that amiable murderess Mrs Daffodil in A Spot of Bother: Four Macabre Tales. The books are available in paperback and for Kindle. Indexes and fact sheets for all of these books may be found by searching hauntedohiobooks.com. Join her on FB at Haunted Ohio by Chris Woodyard or The Victorian Book of the Dead