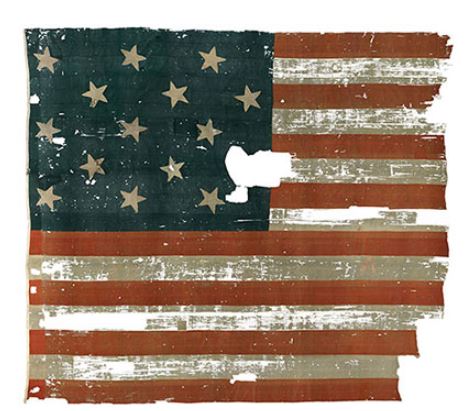 It was on this day in 1814 that Francis Scott Key wrote a poem he called “The Defense of Fort McHenry,” now known as our national anthem.  We cannot exactly hold him responsible for the fiendishly difficult music to which the poem was set, although historians and vengeful contraltos have some evidence that he had “To Anacreon in Heaven” running through his mind when penning the lyrics. I have sought in vain for some Fortean story about “The Star-spangled Banner,” which is why you are experiencing a clumsy segue to the material inspiration for Key’s anthem: the American flag.

As a patriotic symbol, it is unassailable. Viewed purely as a specimen of design, it is (let’s be honest) something of a mess. It is not a simple flag like that of Sweden or Belgium. Its complexity does not suggest an easy subject for simulacra. Yet a surprising number of visions of this banner, spangled down to the last star, have been seen emblazoned across the heavens, particularly in times of war.

SIGNS AND WONDERS IN THE HEAVENS

A National Flag, Soldiers Marching, Etc., seen in the Sky.

On Thursday night last, the 9th inst., between the hours of 9 and 10 o’clock, a most splendid and gorgeous spectacle was witnessed in the heavens. A number of intensely bright and vivid lines of light were seen stretching up in the Northern horizon to the zenith, somewhat resembling those caused by the wondrous displays of the Northern Lights, and were at first taken to be such; in a few minutes, however, the lines or streaks began to converge gradually together, and a most beautiful and perfect National Flag was formed, and stood out in bold relief in the sky, to the awe-stricken gaze of the beholders. This beautiful and magnificent spectacles continued for several minutes, and was witnessed by many persons born in the town and adjoining country, of unquestionable truth and reliability, who solemnly affirm that, notwithstanding the incredulity and disbelief entertained by many of the incredulous in regard to the occurrence of so singular a phenomenon, it really did occur, and that the lines of light really did assume the shape of a flag as above described, and was witnessed by them with feelings of wonder and awe. We are further informed that many persons also firmly avow that on the same night and about the same time, they saw in the skies vivid representations of soldiers marching in regular line of battle, with flags, etc. For the truth of this latter statement we will not vouch; but we feel perfectly convinced that the beautiful and grand spectacle of the flag was witnessed beyond doubt, in truth of which we have the statements of a number of persons of approved veracity. It was truly a most singular and remarkable phenomenon, and may possibly have been an omen foretelling the speedy success of the national cause and the compete restoration of the Union. Hanover, Pa., Spectator. Portland [ME] Advertiser 2 May 1863: p. 4

Night Phenomenon Is Stars and Stripes Silhouetted in Sky.

Searchlights of the cruiser Maryland bring out at night a phenomenon that has aroused the patriotic admiration of all who have seen it. It is a silhouette of the American flag in the sky.

During the marine pageant upon the harbor at night it was noticed with especial distinctness. One of the searchlights of the cruiser had been set upon the flag at its mast, bringing it out in the darkness as brilliantly as though it had been done in colors of fire.

Passing on, the white shaft of light fell in a great white circle on the low hanging clouds over the city, and in the ring of light among the clouds, fluttered the colossal shadow of “old Glory.” Oregonian [Portland, OR] 15 June 1912: p. 12

Apparently such “mirages” were commonplace due to Portland’s climate.

Patriotism of Portland Is Stirred by Appearance of Banner, With Stars and Stripes Plainly Visible.

A double lunar rainbow, built from a veil of fleecy cloud that folded itself in and out and around a nearly full moon about 9 o’clock, behind which a broad field of stars and aerial Stars and Stripes. The moving clouds, against which the vivid colors of the primary rainbow played, gave the effect of a huge American flag floating against the sky for the particular reason that the red, white and blue stood out so prominently in the color scheme, although the other colors of the rainbow were apparent. All who saw the comparatively rare phenomenon could not help but see the fine display of the National colors.

The double lunar rainbow became visible soon after 8 o’clock and grew in beauty until after 9 o’clock, when the shield of thin cloud passed on. The lunar decorations were shifting, as the clouds moved across the starry background of perfect evening sky, giving the effects of a flag floating in the breeze.

Lunar rainbows are not particularly rare. They have frequently been seen in Oregon, where the night air is moist at times, providing a playground for the moon’s rays, but the double lunar rainbow which completely enfolded the nearly full moon and the moving clouds offered a sight whose beauty was almost awe-inspiring in these patriotic times. Oregonian [Portland, OR] 6 April 1917: p. 16

1917 was a banner year for flag sightings:

St. Louis, Mo., Oct. 1. An American flag, almost perfect as to detail, could be seen in the heavens at sundown, the phenomenon lasting from 6:08 o’clock until 6:13. Stripes of fleecy white clouds formed the stripes of white, the sky the field of blue and the sun tint provided the necessary red. Stars were perfectly visible in the part of the flag where they should have been. Daily Alaska Dispatch [Juneau, Alaska] 2 October 1917: p. 8

It was also about this time that reports began appearing in United States newspapers about the visions of the Virgin Mary seen in the clouds at Przemysl.

But you couldn’t beat a vision of the American flag that predicted victory for our troops.

THE FLAG IN THE SKY DURING CIVIL WAR

Might may be right, and then again, it may be wrong. Who is there to say that there is not a destiny that shaped the ends of war, a power beyond the feeble brain and strength of human kind? There may be many, but history shows unexplainable things in war, says the Auburn Citizen.

Some weeks ago many people claim to have seen the Stars and Stripes plainly painted in the sky at night, and among those who say it were many who believe that it was a message of victory, swung there in the heavens, an assurance that in the end, it will float proudly, the emblem of peace and protection to the people of the earth.

Call it superstition, a creation of the imagination or what not, those who saw it are staunchly sure of it and unshaken. The most imaginative, the most practical, the greatest scoffers of superstition admit that it was there, and they cannot explain it.

That it was placed there for a purpose and that it was a message of final victory is the belief of many, and among those who believe that the starry banner floating there, a giant flag in the heavens, portends victory is Charles F. Crofoot [sic], of Venice Center, a veteran of the Civil War, for in it he sees only history repeating itself.

Mr. Crofoot did not see the flag there a few weeks back, but when he heard of the wonderful phenomenon it gave him no surprise. It only recalled to mind a similar writing in the sky that he witnessed with his own eyes about September 1, 1862, when with his regiment, the One Hundred and Thirty-eighth New York Volunteers, later the Ninth New York Artillery, he witnessed a similar sight.

The regiment was encamped in Auburn, awaiting orders to proceed to the front, and there are many veterans of the regiment who recall the incident vividly. It was written on Mr. Crofoot’s mind irradicately and stamped on his memory in such an indelible way that he sees it in mind as plainly as though it had occurred but yesterday.

Most of the old Ninth Artillery have passed on to their hero reward, but those that remain and saw it and those that did not see it, but heard the wonderful story from the lips of their comrades the following day, all recalled the incident when they heard of the strange sight last month. Mr. Crofoot was on guard duty with others when the flag appeared in the heavens to the southwest. It was no queer combination of colors or lights that they saw, woven into the Stars and Stripes of the American flag by a hectic imagination. It was the Star-Spangled Banner, perfectly shaped and perfectly made, its stripes evenly and distinctly marked, its blue field and its perfect stars all in the proper place, a giant American flag as perfect and as plain as any flag could be. For several minutes it hung and rippled gracefully far up in the southwestern heavens and then disappeared.

Every man on guard that night saw the wonderful vision. Every man of them saw the same thing, and in the days to come it stood out in their memory and gave them courage, for there was not a man of them who did not feel that it was a message assuring them of victory. The regiment moved South and played its brave part in winning the war, and the history of the successes of that Cayuga County regiment is well-known.

Those soldiers of the North who saw that flag and heard of the similar sight a few weeks back all know that it means something. Arguments of the greatest astronomers giving practical reasons for the vision could not shake them.

Victory followed it in ’62, victory will follow it again, these men say. Destiny waved it there. When the right time comes there will be peace and the American flag will wave over the red drenched fields of Europe, they feel sure. New Orleans [LA] States 21 October 1917: p. 35

Charles F. Crowfoot [the correct spelling] is listed in The Ninth New York heavy artillery, by Alfred Seelye Roe, 1899, as a bandsman. He enlisted 13 August, 1862 and was discharged 29 August 1964. 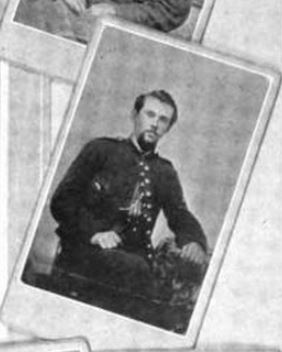 One would think that a staggering vision like that described by Crowfoot would have been recorded in the regimental history or by some of the other witnesses. It was not, apparently, and we have only Crowfoot’s statement that others saw the banner in the sky. I also have not located a Missouri source for the Alaskan squib, which appears to be the vision of “a few weeks back.”

Still, it is an inspiring tale. The United States had declared war on German on 6 April, 1917 and morale was sorely in need of boosting.

Any other flag flaps or an “official” report of the 1862 flag in the sky? And can they all be explained by lunar rainbows and northern lights? chriswoodyard8 AT gmail.com

For a previous flag vision in the sky, see this post, The Flagman and the Skeleton.