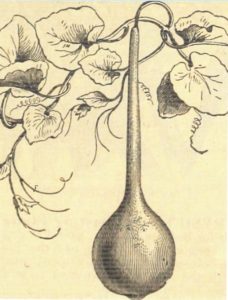 The Gourdian Blot The Face on the Gourd (Dramatic reconstruction.}

I’m delighted that my article surveying “lightning daguerreotypes”—images mysteriously imprinted, etched, embedded or otherwise made visible on windows—is appearing in the upcoming Fortean Times magazine. Of necessity, for there are hundreds, if not thousands of cases to be found world-wide, the article is a brief look at the phenomenon, focusing on the 1870s flaps in Ohio and California, in which the “window ghosts” were sometimes likened to spirit photography.

Window glass was only one media in which mysterious images and faces appeared. Tombstones, mirrors, walls, and household linens were popular venues for the enigmatic icons. However, in this story, the unique backdrop for the paranormal portrait of a dead wife was a mundane household object: a drinking gourd.

Desired By His Wife

And Used in His Family as a Drinking Vessel

Has Strangely Developed a Picture of the Woman on Its Surface

Special Dispatch to the Enquirer.

Lexington, Ky., November 2. Carrying with him a gourd, upon which has mysteriously developed the image of his dead wife, E.S. Moore, of Birmingham, Ala., is stopping here en route from his adopted home at Waco, Texas, to visit his sister, Mrs. D.P. Hart, in Pittsburg, Penn., from where he expects to ship the mystifying object to Adolph Myer, his wife’s father, in Germany. Moore stopped in Lexington to renew old acquaintances, this being the place of his nativity. He showed the gourd with the picture of his wife upon it to a number of persons who knew them both a few years ago.

Mrs. Moore was Bertha Myer, the daughter of a butcher of Cleveland, Ohio. Moore met and married her in St. Louis and brought her to his home here. Upon an occasion when they were on a pleasure trip to Natural Bridge, one of the natural curiosities of Kentucky, located in Wolfe County, Moore’s wife noticed a very attractively formed gourd hanging from a vine which clung to the rocks that formed this wonderful freak of nature in the Kentucky mountains, and she asked her husband to secure it for her. The gourd was brought to their home on South Mill street here, made into a dipper and used for drinking purposes. One day Moore says he noticed a peculiar blueish stain on the bowl of the dipper and undertook to wash it off with soap and water. The stain was immovable, but he thought nothing more of it until one day his wife called his attention to it, saying that she thought she could see the outline of a human form in it. After that the gourd was taken care of, and it was noticed that the figure became plainer.

Mrs. Moore died and her husband removed his household effects to Birmingham, Ala., where he pursued is trade as a harness maker. His effects were not unpacked until later, when he had concluded to settle at Waco, Texas. Upon unpacking his goods there he thought of the gourd, remembering the incident in Kentucky when his wife had pointed out to him the outlines of the human figure on it. To his surprise and astonishment he saw before him a perfect likeness of his wife. The black, wavy hair, the perfect flesh color in her cheeks and face, the lips slightly parted and of natural color, and the eyes with the most natural expression, such a might have resulted from the brush of a skilled portrait painter. Moore was almost frightened and called in his neighbors, and soon people came from various parts of the town to view the wonderful development. He asked scientific men regarding it, and says that the mystery is still unsolved.

The image is about three inches long and well proportioned. The face and shoulders are fully developed while the lower part of the figure is but dimly outlined. After showing the picture to his sister in Pittsburg Mr. Moore expects to ship it to Mr. Myer in Germany, who has repeatedly written him, urging him to do so and promising to return it after he and his family have had an opportunity of seeing it for themselves. Mr. Moore says he is not superstitious, but that the development of his wife’s picture upon the bowl of his gourd, which he secured at her request and which they used for many months as a drinking vessel, has completely perplexed him, and that he proposes to keep the gourd as long as he lives.

The text of the Enquirer article seems to be the one circulated in the United States press. I have found no follow-up to the story (did Mr. Moore really ship the object to Germany?) or illustrations of the gourd.

It is likely that contemporary Spiritualists would have suggested that the picture on the gourd was a spirit photograph, a gift from beyond the grave to give a loved one hope.  The use of the words “developed” and “development” in the account above hint at this theory. It is singular that washing the gourd did not remove the picture, but accentuated it. This odd little detail is found repeatedly in face-in-the-window narratives: washing or scouring a window marked with a “lightning daguerreotype” only strengthened the image.

Today we hear about the phenomenon primarily in terms of religious images found in tree trunks, tortillas, cinnamon buns and shower-floor mold. It is easy to dismiss such visions as pareidolia or ridicule them as wishful thinking. A bereaved man might read much into a gourd’s natural markings in a sort of ink-blot test of grief and sentiment.

Other post-mortem portraits on vegetables? chriswoodyard8 AT gmail.com