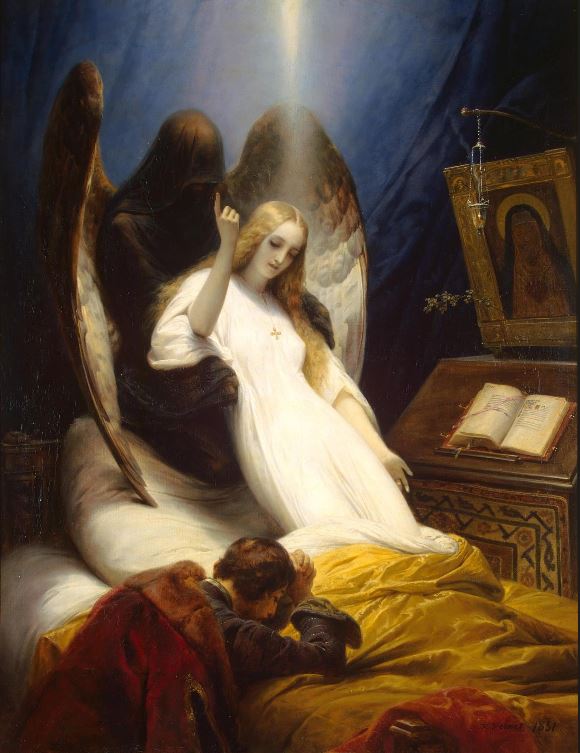 The Death Angel takes many forms: the hooded Grim Reaper, the Radiant Boy, fairy-like cherubs, the bloody-handed Banshee, or, in today’s case, a dazzling Woman in White.

[This piece comes from an interview of medium Mrs. Ellen Green, in a column called “The Mysteries of Mediumship” by “Our Special Representative” in the Spiritualist journal Light.]

A short time since I gave an account of a chat with Mrs. Stansfield, a bright little medium from the North, enjoying much honour in her own country, and commanding it in London immediately her remarkable gifts became known. Mrs. Green, of Heywood, is another Lancashire medium, or Lancashire witch if you will have it so, who, in many respects, compares with Mrs. Stansfield, of Oldham. She is a pleasant mannered, pleasant spoken little woman, very quiet and very retiring, with the accent of her native county just enough marked to agreeably flavour her talk.

[The narrator asks about how she became a medium.]

“Was there mediumship in the family”

‘My mother had the gift of second sight strongly developed, and could often foretell a death or a striking event. I myself can always feel when anybody related or dear to me is going to pass over. The first time I saw the Death Angel—’

‘The Death Angel! Surely now, I thought that dread personage was an altogether imaginary character.’

‘I have the same vision in each case, and I have come to call the spirit the Death Angel. I have never heard of anybody else seeing it. I was about sixteen at the time, and my mother and I were alone in the world. She was ill; and whilst I was at work in the factory where I was employed I heard my name, “Ellen,” repeated three times very distinctly. Fearing something wrong, I obtained permission to go home, and on the way, while passing through a large yard connected with the factory, I saw in front a form of dazzling white. There were no features distinguishable, but the form was that of a woman, clothed in a white robe of indescribable beauty. I put out my hand, a cold shudder went through me, and she melted away like snow under the sun. Hastening home, I found my mother unconscious; and when she came to herself I told her what I had witnessed. “My child,” she said, “I shall never get well. You have seen the spirit I always see when one I know is about to die.” And a day or two later she passed over. I have seen the Death Angel several times since, but only in the case of relatives or friends for whom I have a strong feeling of affection.’

This is a softer, gentler, friends-and-family version of the Reaper, as opposed to the terrifying hooded Things found here and the bureaucratic Messenger of Death found here.

Intriguingly, in the same interview, Mrs Green confesses that she is afraid of spirits.

Spirit people I have seen as long as I can remember. As a child I used to play with spirit children, and not dream that they were different in any way from other children.’ “I suppose you were not long in discovering the difference ” ‘Longer than you might think. It was all so natural; and it did not occur to me that my little playmates were not visible to everybody as they were to me. When I knew they were not of earth, my feelings changed.” ‘How do you mean?’ ‘I don’t know whether it should be said, lest I be misunderstood, but I am afraid of spirits—afraid, that is, for them to come near me.’ ‘That is rather singular, is it not, when, as I gather is the case, you are on such intimate terms with the other world, and find its beings so natural in appearance and character?’

‘Yes, particularly as they are so natural that I often fail immediately to distinguish them from persons who have not passed over. I can’t explain the feeling, but it is very strongly implanted in me. I never attempt to speak to them, and if one comes near me I shrink away or even cry out. One of the photographs in Mr. Glendinning’s book, “The Veil Lifted,” is of me with a spirit form by my side. The spirit was necessarily quite close to me, and the peculiar expression of my features, and the attitude of shrinking away from the form were due to my uncomfortable sense of its proximity.’

Mrs Green does, indeed, look dubious in the photograph. 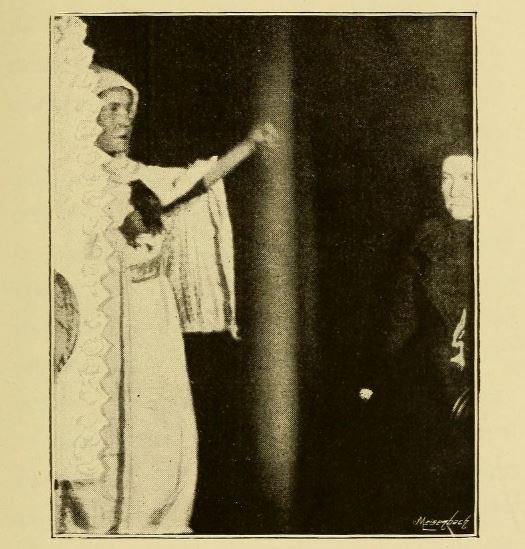 Death Angel in Lancashire Mrs Green, of Heywood (medium), and the same spirit form as in the next plate, but in a different attitude, and with the birds and flowers reversed. Stereoscopic photographs obtained October 21, 1893 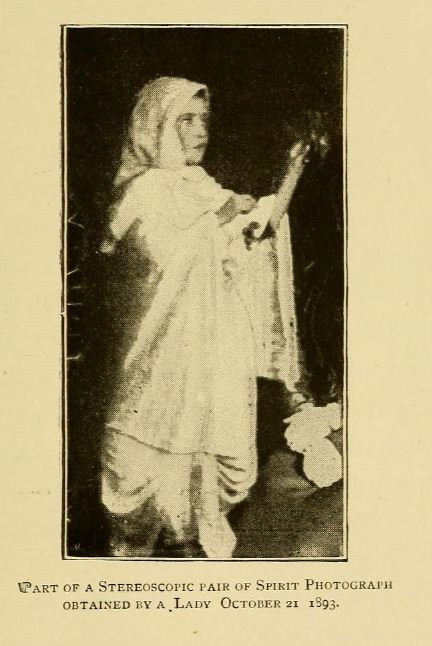 Death Angel in Lancashire Another view of the death angel spirit photograph.

To be Relentlessly Informative, the hand in the lower right hand corner of this photograph somehow suggests an air pump; inflatable “spirits” were a useful prop in the séance room—easily hidden, then inflated and deflated, they were perfect for materializations and dematerializations.

I’ve included a chapter on Victorian personifications of Death in The Victorian Book of the Dead. They are fascinatingly rare in nineteenth-century non-fiction, especially considering the cultural focus on death and mourning.

Other Death Angels or Grim Reapers? chriswoodyard8 AT gmail.com