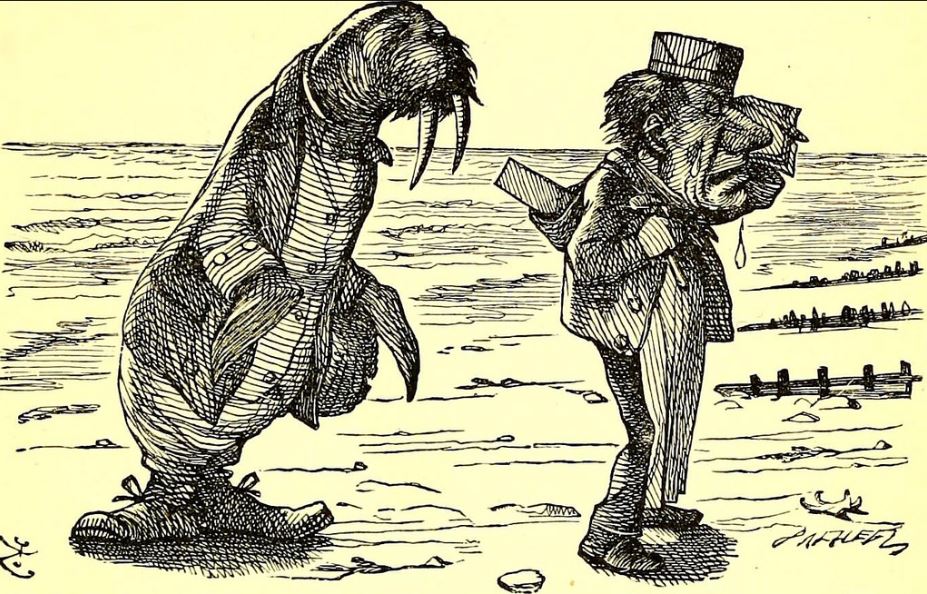 The Little Man with the Soiled Handkerchief The Carpenter sheds a bitter tear into his handkerchief.

Previously I reported on the “Carpenter of Doom,” who always put in an appearance when a death was about to occur in the vicinity of the anonymously initialed narrator. That curious conductor of souls wore workman’s garb and the traditional paper-hat of a journeyman carpenter.  The last sighting of the creature was reported in 1904. More than two decades later, a woman in the grip of double pneumonia met her own Carpenter of Doom.

How Mary Despised Him—and, Until She Emerged from the Depths, She Had Almost Lost Faith in Loved Ones Who Couldn’t See Him.

“The thing I hated,” said Mary, “was the Little Man—he was such a dirty little man and he sneaked so, you never could hear him coming—or going—you just looked up and there he was.

“He had on overalls and there was a carpenter’s rule in his old overalls pocket, and he had a soiled handkerchief—a very soiled handkerchief, and whenever he saw me looking at him, he pulled it out and waved it at me—with a kind of sly, knowing leer.

“And I was deathly afraid of him, and nobody would do a thing about him.

“I spoke to my daughter and she said, ‘Why, there’s no little man here, mother, there’s no one here but me,’ and I looked at her bitterly and thought, ‘He has paid her to say that.’

“And my son came into the room and I told him about the hateful Little Man, and my son said he didn’t blame me for hating him—he hated him too and he didn’t think it was any use trying to get rid of him where we were; what he thought we’d better do was run away from him and hide somewhere so he couldn’t find us.

“And he would come after us, he said, at exactly ten minutes past eight, and he’d have the fast car and lots of pillows and things and he’d dare any little old man in overalls to keep up with that car.

“Then he never came back after me—not at ten minutes past eight, nor at nine, nor at ten. “And I heard the squeak of a door and there was the Little Man, sneaking around the corner of the bed.

“When the doctor came he said: ‘Don’t worry now, don’t fret, take this and keep it down and you’ll be all right in the morning.’

“And he didn’t do a thing about the Little Man with the soiled handkerchief and I hated him for it, and I hated my nurses because they pretended that they had never heard of the Little Man or seen him, either—and then one morning, all at once, I woke up in my room at home and the birds were singing outside and the little rose-colored Japanese plum tree was almost purple outside the window, it was glad that Spring was near, and my daughter came in with a cool drink and the son came in with a light step and a laugh and a little song he had just heard, just a verse of it, a silly thing, but I shall never forget it as long as I live—it sort of sang me out of the black, whirling darkness where I’d been living and the Little Man vanished forever—I hope.

“Pneumonia—double—and complications—that’s what the Little Man was, but somehow even yet, I feel that he lives somewhere in some disgusting hole and makes it his pernicious business to terrify poor souls in a fever.”

Poor Mary, she really did hate that Little Man and she almost lost her faith in those who were all trying so hard to help her—just on the Little Man’s account.

To be Relentlessly Informative, this piece was written by “Winifred Black,” one pseudonym for Winifred Sweet Black Bonfils [1863-1936] a “sob sister” reporter and columnist for William Randolph Hearst’s syndicate, which explains the plaintive tone.

Now, of course, the simplest explanation is a fever hallucination. Mary sounds like she was lucky to have pulled through a very dangerous disease. Double pneumonia was nothing to trifle with. But once again the question comes: why was this sinister creature a carpenter? Did he have his rule to measure her for a coffin? And why did she see a “little man” rather than a full-sized human?

Hallucination among the hospitalized—”hospital delirium“—is increasingly being recognized by the medical community. I would be interested to know if miniature menaces are a common hallucination. Here is another case:

As a subscriber to your Occult Review I wish to state the interest I have taken in the writings regarding Fairyland, gnomes, elves, etc. Some time ago, my wife had a very serious illness through blood poisoning. During that period she had some very strange experiences. She told me that her constant companions on her bed were a very dwarfed set of beings. I have much wondered since that time whether they were subliminal or objective in character.

A few weeks ago, along with a few select friends, sitting round a table we were told that the control of the table was an elemental who promised to show himself in the fire. Two of the sitters said at the time they recognized this peculiar entity among the flames. Rather funny, but I believe not impossible.

I am, yours faithfully,

If only the correspondent had given more details of these “dwarfed beings.” While the heading implies the malice of the Fae, the second paragraph seems to suggest that they are elementals, usually malicious entities, according to the lore of Theosophy, and, according to some Spiritualist lore, they batten on the weak.

Other “little men” who haunt the sick? chriswoodyard8 AT gmail.com