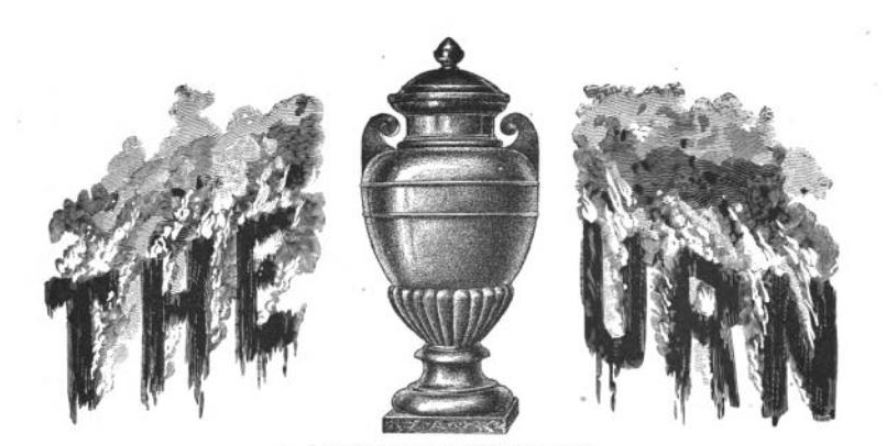 A report of a vile, “ashes for cash” scheme sent me to my files on early cremation to look for vintage stories of  purloined cremains.  It was surprising that, while corpses were often held for ransom or replevin, similar stories about ransom demands for ashes were extremely rare. Perhaps this was because fewer Victorians were cremated, yet there were plenty of stories of stolen ashes.  Let’s fire up the retort and look at some of these cases of ashen bodysnatching. There is quite a variety in motives and mysteries.

In most of the ash-theft cases, it is obvious there was a more mercenary motive.

St. Louis, Dec. 15. Miss Cora Evelyn asked the police to locate a robber who stole from her $250 worth of jewelry, including an unusual ring. This ring contained the ashes of her former sweetheart, according to her statement. He was Charles Patterson who died in Binghamton, N.Y., about a year ago.

After his body had been cremated, Miss Evelyn says she procured a small quantity of his ashes, which she had placed in the setting of the ring, behind a transparent film. Her reason for this, she said, was to have near her always, some forcible reminder of her dead sweetheart. The Topeka [KS] State Journal 15 December 1910: p. 9

Today, of course, you can purchase pretty glass lockets in which to keep a pinch of the loved one’s cremains ever near, but in 1910, the ring  was freakishly unusual. In the 19th century the “correct” mourning accessory would have contained the hair, rather than the ashes, of the beloved.

Thefts of bronze urns and grave markers for scrap-metal sale are commonplace even today. One wonders if that was the motive here.

The police of Newark, N.J., were asked yesterday to investigate the theft of a bronze urn containing the ashes of Henry Rundel Center. The urn bore the name of Center and the date of his death, November 19, 1909. Mrs. Catherine Center, widow of Henry Rundel Center, occupied an apartment at 176 Third street. Recently she went to Washington, D.C., and left the apartment in charge of a friend. The friend discovered several articles were missing, among them the urn. A sneak thief robbed the apartment. Harrisburg [PA] Telegraph 29 March 1918: p. 24

Other stories are simply a comedy of errors:

An American widow who is so devoted to the memory of her late husband that she always carries his ashes with her was revealed by a curious mistake at the Pittsburgh station of the Pennsylvania line.

Mrs Mary White, of Chicago, who had been spending a holiday with friends at Pittsburgh, left her portmanteau at the station cloakroom while she was saying good-bye. At the same time a mechanic named James Robinson, who was going to seek employment at New York, left a similar valise containing his tools at the same station. Robinson was the first to call for his bag, accepted the one handed to him, and started for his 21 hours’ journey to New York.

Here his quest for work was successful. “But I can’t begin,” said Robinson; “they’ve given me the wrong valise at Pittsburgh and my tools are left behind.” An examination of his luggage disclosed the fact that the valise he had brought contained some woman’s wearing apparel and a sealed copper urn, to which was attached a coffin plate engraved, “George Shires White, died 1910.” There was also a Civil War medal which had belonged to Mr White. At the same time the stationmaster Chicago was telegraphing throughout the Pennsylvania line: “Wanted, a lady’s valise containing memorial tagged with the name of White; lady very anxious.”

The bags were exchanged as speedily as possible, and Mrs White explained to the Pennsylvania officials that she was never able to bring herself to inter her husband’s ashes after his cremation. She kept them with her, and it always seemed as if he himself were still her companion. Mataura Ensign, 8 August 1911: p. 5

In this story, the ashes were removed by police-impersonators probably under the guise of public health concerns. If they just wanted her trunk, how did they know there were ashes in it—did the recently widowed Mrs. Rankin mention it to the desk clerk?

Cincinnati, Ohio, July 29. The disappearance of a trunk from her room in the Bremen Hotel, Twelfth and Bremen streets, containing the ashes of her husband, John Rankin, 47 years old, who died June 25, was reported to police late yesterday by Mrs. Bertha Rankin.

She told detectives she was informed police had ordered the trunk to be removed. No such order was issued through the Police Department, she was told. Philadelphia [PA] Inquirer 30 July 1916: p. 7

Sometimes the thieves, spooked by what they’d done, abandoned their loot.

Human ashes stolen Monday night from the offices of the Denver Crematory association, 100 First National Bank building, and abandoned by the thieves in a bakery at 1955 Curtis street, were returned to the crematory by the police Thursday.

“It is the most mysterious happening I ever heard of,” declared President W.D. Pierce of the crematory, Thursday. “When we received Mr. Haller’s body, we were instructed to cremate it and scatter the ashes.

“The body was cremated March 24 and the ashes were locked in a steel vault at the cemetery. On Sunday, a brother appeared at the crematory and instructed Mr. Rice to ship the ashes back to Mancos. Mr. Rice sealed the ashes in an urn and brought them in to our office Monday night. The office force was gone when he arrived, and he placed the urn in a roll-top desk, locking the desk.

“The next morning we noticed that the desk would not lock, but [The rest of the story doesn’t appear or is illegible.] Denver [CO] Post 30 March 1922: p. 1

Here’s the rest of the story:

After having passed thru a peculiar chain of circumstances, including interment in a steel vault in the Riverside cemetery, theft from the office of the Denver Crematory association offices, abandonment in a Denver bakery and finally being turned over to the police, the ashes of J.J. Haller of Mancos, Colo., whose body was cremated on March 24, are to be shipped today to Mancos, where they will be laid in what is intended as a final resting place.

The almost unprecedented theft of human ashes was discovered yesterday when an urn containing them was returned to the Crematory by the police. The theft, which evidently occurred on Monday night, had not been noticed because of conflicting instructions from the relatives of the dead man.

Joseph C. Rice, assistant superintendent received the latter instructions on last Sunday, so he took the urn containing the ashes to the downtown office of his company. He placed the urn in a rolltop desk and locked it. On Monday morning the urn was gone, but because of the misunderstanding that existed the possibilities of a theft was not considered.

Upon the return of the urn to the crematory association yesterday by the police, it was explained that the urn had been left in a bakery shop by two boys who said they would return for it. When they did not come to claim it the baker took it to the police station where it was opened and its contents discovered. It is a matter of conjecture as to whether the boys left the urn with the baker without knowing what it contained or whether they opened it and learned of its contents before abandoning it.

A telegram asking reasons for the delay in the shipment of the ashes was received from Mancos yesterday, so the ashes will be shipped today.

Recently I read of a donation to a thrift store of a bottle labeled “Dad’s Ashes.” Perhaps the bereaved are simply absent-minded, leaving “Dad” or, as in the following story “a carpenter” in the wrong place.

Berlin, April. 30. Strange objects have been left behind in public conveyances, but it is not often that deliberation or forgetfulness abandons anything more incongruous to workaday traffic than the urn containing the ashes of a carpenter, which was found yesterday by a conductor in the corner of a Cologne tram car.

The incident proved to be even odder on investigation than it had appeared at first sight, for it turned out that the vessel had been stolen from a railway carriage, evidently under the impression that it contained something to eat or drink, while its legal owner was conveying it home from the Maience Crematorium. On discovering that he had embarrassed himself with the incinerated remains of a carpenter, the thief had hastened to get rid of them by leaving his burden in the train. Los Angeles [CA] Herald 15 May 1910: p. 4

Did the thief think the urn was a thermos?

Then there are the truly mysterious thefts, hinting of nameless uses for the ashes.

ASHES STOLEN FROM A GRAVE

The Discovery of the Outrage Causes a Sensation in Raleigh

Raleigh, N.C., May 26. A distinct sensation has developed here among a wide circle of friends of the family at the discovery that the grave of Miss Mattie Oettinger, in Oakwood Cemetery, has been opened and her ashes stolen away. The ghouls had cut off the turf and dug down into the inner cell, where the urn was placed. On replacing the roof a mistake was made, so that the earth sifted through, causing a depression of the grave. This and the withered turf led to the discovery.

Miss Oettinger was a daughter of the late Isaac Oettinger, and died in New York about more than a year ago. The remains were cremated and brought here for burial in the family lot. Every effort thus far has failed to reveal any clue to those guilty of the crime. Richmond [VA] Times Dispatch 27 May 1906: p. 5

Towards the end of my search, at last I located a single instance of “ashes for cash.”

Berne, Switzerland, Oct. 1. Thieves broke into a crematory situated in Bienne near Berne, a few nights ago, and stole a few sepulchral urns containing the ashes of members of wealthy families.

Prominent families of Berne and Zurich are receiving letters offering to return the urns for a consideration varying between 2,000 and 4,000 francs, according to the financial standing of the owners.

The police hope to lay a trap for the ghouls.

And, finally, the lust for murderabilia formed the motive for the theft of a murderer’s cremains.

Pittsburgh, Pa., Jan. 3. The ashes of Steve Rusic, whose body was first to be cremated in the county crematory, after he had been hanged in the county jail yard for murder, have slowly disappeared from an urn in the morgue building, where they have been on view since February, 1911. Curiosity-seekers are accused of carrying away the ashes until about half a handful remains.

The theft was discovered today when Deputy Coroner John Moschell noticed that the urns, containing the ashes of persons cremated, had been disturbed. Rusic was hanged for the murder of Salvarro [Mary] Domboy at her home in McKees Rocks January 15, 1910. Philadelphia [PA] Inquirer 4 January 1917: p. 2

Mrs Garvarro Domboy was shot by Rusic as she lay in bed with her husband and baby. Some papers reported that this was because she refused to accept the man’s attentions; others because she had ended their love affair. Did the curiosity-seekers think they could use the ashes for some kind of charm or did they merely want a grim and sooty souvenir?